San Sebastian: Basque in the culture

As the international film festival arrives this weekend, it’s the perfect chance to visit the Spanish city that revels in its natural gifts and life’s pleasures 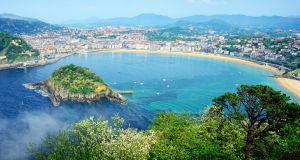 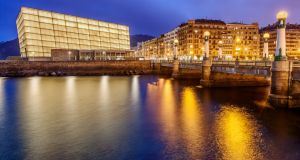 Puente del Kursaal (bridge) over the river Urumea, with the Kursaal congress centre and auditorium lit in the background. Photograph: Getty Images

Beautiful and creative but marked by a troubled past, San Sebastian in northern Spain could be – aptly enough for this city in thrall to film – a creation of the country’s great movie director Pedro Almodovar.

Framed by green hills and golden sand, this jewel of the Basque country revels in its natural gifts and life’s pleasures. Yet it is a city of many faces and moods, of warm sunshine and slashing showers, and its bold grace is steeled by adversity.

Tucked into a verdant crook of the Bay of Biscay 20km from where Spain meets France, San Sebastian offers some of the world’s best food and finest urban beaches, a coastline of shimmering surfing breaks and a hinterland of hiking trails.

But this Cork-sized city also boasts film and music festivals that few world capitals can match, and a style that blends sophistication with hospitality and an unpretentious pride in the Basque Country and the talent and tenacity of its people.

Out of this region’s turbulent history San Sebastian has forged a prosperous present, a powerful identity, and a rich and distinctive artistic life which – now more than ever – reaches out to the world with a refreshing openness and curiosity.

San Sebastian is a European Capital of Culture for 2016, and organisers have sought to harness its greatest assets – the passion of locals for their city, and the spirit and diversity that flow through this happy meeting place of land and sea.

“The Basque Country may be quite small but it is very innovative and outward looking. Traditions and identity are very strong, and we want to use our activities to give light to the qualities of this territory, this land,” said Pablo Berastegui, the director of San Sebastian 2016.

“This is a city with a strong commitment to culture, and we asked its citizens why we should apply to be a European Capital of Culture and what they want to achieve. This is a fundamental thing for us – citizens’ participation.

“If a project here is not taking people into account, they feel that and reclaim it… San Sebastian looks like it could be a conservative, bourgeois place. But this is just the façade. There is much more beneath that is very surprising.”

The boulevards that radiate from the arc of La Concha beach – elegant as the Belle Epoque Paris upon which they were modelled – do feel like the natural habitat of well-heeled locals and the wealthy French tourists who have long summered here.

But barefoot surfers also stroll these leafy streets on their way to Zurriola beach, a “little California” of laidback cafes, bars and near-constant waves, where sensuous Henry Moore sculptures currently grace the waterfront. Zurriola is separated from San Sebastian’s old town by the river Urumea – which rushes through the hills, past traditional cider houses, to thread the city’s heart and tie it to the sea – and from its bridges the vista expands to embrace a century of cultural history.

On the left bank stands the 104-year-old Maria Cristina Hotel which, every September since 1953, has provided an elegant home to guests of the international film festival, from Bette Davis and Elizabeth Taylor to Robert De Niro, Brad Pitt and Spanish stars like Almodovar, Javier Bardem and Penelope Cruz.

Next door is the equally venerable Victoria Eugenia theatre, which was the festival’s main venue until the size of the event and the need for renovation saw that mantle pass to a radically different building on the opposite bank of the Urumea.

The two dark, semi-translucent wedges of Spanish architect Rafael Moneo’s Kursaal are intended to evoke jagged rocks stranded on the shore, and the auditorium and congress centre certainly drew stony looks from many locals when it opened in 1999. But like the glittering Guggenheim museum 100km away in Bilbao, the Kursaal quickly became a landmark of San Sebastian and a symbol of its readiness to innovate and take risks.

This same spirit moved the creators of the film festival, a group of local shop-owners who wanted to give their city a boost as the repressive rule of dictator Francisco Franco mired Spain in international isolation. After visiting Cannes with his wife, one of these businessmen convinced his colleagues that their city needed its own celebration of cinema.

By launching the event in September 1953, San Sebastian extended its summer season and acquired a new caché for the jet set and cultural elite.

This festival’s 64th edition, running from September 16-24, will include first screenings in Europe for Ewan McGregor’s directorial debut American Pastoral and A Monster Calls, starring Liam Neeson and Sigourney Weaver.

The US actress and compatriot Ethan Hawke will this year receive the festival’s award for career achievement, which proudly bears the Basque name for San Sebastian – Donostia.

“Our festival is officially ranked alongside Cannes, Berlin and Venice, and it is the world’s most influential Spanish-language festival,” Gemma Beltran, a festival spokeswoman, said over coffee at Tabakalera, a vibrant new cultural centre housed in a former tobacco factory beside the river.

“But it’s also very much an event for local people. About 60,000 tickets are sold on the first day of release, and 180,000 people come to see films throughout the festival. The city’s 3,000-seat velodrome becomes probably the biggest screening room in the world, and shows films for children every weekday. Basque people love culture and film, and they see San Sebastian as their cultural capital too.”

The city’s renowned jazz and “musical fortnight” festivals try to be just as connected to the local community, but none of its delights are more deeply rooted in Basque culture than its cuisine.

San Sebastian’s restaurants hold 16 Michelin stars – more per square metre than anywhere but Kyoto in Japan – and it has become a prime destination for anyone wanting to eat like a king or queen.

In the 1970s and 1980s local chefs championed “new Basque cuisine”, which turned fine local produce into innovative dishes and reimagined regional classics. They also inspired chefs across Spain and around the world, and turned the Basque Country into a byword for outstanding food, with restaurants that regularly cluster near the top of global rankings.

The Basque Culinary Centre, based in a typically bold San Sebastian building, is now training a new generation of international chefs under the guidance of local culinary stars like Juan Mari Arzak and Martin Berasategui, and an advisory board of luminaries that includes Ferran Adria and Heston Blumenthal.

The brilliance of Basque cooking is not confined to the eponymous restaurants of Arzak and Berasategui, however. Most San Sebastian bars serve pintxos, the Basque take on tapas, and the best of them combine in miniature the outstanding ingredients and creative flair for which the city’s most famous restaurants are renowned.

A pintxo tour of the city’s old heart, the Parte Vieja, can be a delicious introduction to how San Sebastian eats, drinks and socialises. Pintxo trays piled high with spectacular bites make for sumptuous grazing and great photographs, but this is not a mere show for hungry tourists.

The Basque love of food runs deep, and is bound up with a language and culture that were suppressed during a 36-year Franco dictatorship that ended in 1973.

One of the few places outside the home where Basques could comfortably speak their own language was a txoko – part gastronomic society, part social club, where members cook and eat together and culinary traditions are preserved.

“Like the film festival, the gastronomy here is world class. But it is also very rooted,” said Berastegui, director of the capital of culture year. “It is based on these gastronomic societies, and it is in every family. It is about the pleasure of cooking as well as eating, and about being together.”

Solidarity and social awareness are important to Basques, and their region’s biggest employer is a federation of workers’ collectives called Mondragon, which has interests ranging from banking to industry, places strict limits on executive pay and funds a renowned university of which the Basque Culinary Centre is part.

The Basque Country’s sense of care – for its people, environment, culture and guests – survived ETA’s separatist terror campaign, and five years after the group’s definitive ceasefire it is evident in San Sebastian and its surroundings.

It is in the perfection of a pintxo, stunning seascapes that are set to feature in Game of Thrones, and in the beauty and spirit of San Sebastian, which will remain one of Europe’s most alluring cultural capitals long after this landmark year.

How to... San Sebastian

From Dublin, Aer Lingus flies to Bilbao and Ryanair flies to Biarritz – both airports are about one hour from San Sebastian by car or bus.

San Sebastian Tourism has information on the city and the Basque Country, and details of all 2016 Capital of Culture events can be found here.