In the month of August Italian cities empty as the citizens head for the beach. Here’s a guide to the Italians’ favourite seaside resorts 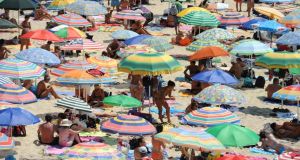 Come the good weather, virtually every Italian will begin planning a trip to the beach. Andiamo al mare, we’re going to the seaside. Beginning in June, Italy’s beaches start to fill up with day-trippers and weekenders from the surrounding regions. They’re joined in July by foreign tourists who often have the beaches to themselves midweek as most of the country prepares for the annual migration. Because from August 1st, you’ll start seeing signs everywhere: chiuso per ferie, closed for holidays.

The authors of such signs and their families have packed their cars and are stuck in long, slow-moving queues at motorway toll booths, waiting patiently because they know that beyond the booths are the golden sands and warm Mediterranean waters that they will spend as large a chunk of the month enjoying as their budgets and lifestyles will allow.

Some Italians like to mix it up, picking different beach resorts depending on what’s trendy this season. Others remain devoted to the same spots, going to the same beach year after year, renting the same accommodation, even opting for the same spot at the beach club.

Most Italian beaches have beach clubs, which range from one operator renting out loungers and umbrellas to more permanent establishments with bars, swimming pools, restaurants and kids’ clubs. You pay a fee – anywhere from €10 to €60 a day – for which you get a couple of loungers and an umbrella, which are yours for the whole day, no matter how long you spend there.

There isn’t a strip of sand or rocky cove anywhere in the country that won’t have somebody on it during the summer, but these are the most popular regions:

Adriatic coast
The Adriatic coast on either side of Rimini is Italy’s most popular seaside destination. The first beach huts were erected along the 110km stretch of golden sand in 1843, and it grew in popularity to become the place to get a tan in the 1950s and 1960s. Since then it has become Italy’s answer to Ibiza, Marbella and Blackpool all rolled into one: fun, unpretentious and tacky. It is the favoured destination for budget-conscious families and a young party crowd who can’t get enough of the raucous nightclub scene.

The most popular strip is Riccione, just by the airport south of Rimini proper, where during the summer months every inch of sand is covered in deckchairs and beach towels.

About 30km north of Rimini is the fashionable beach resort of Milano Marittima, the destination of choice for beachcombers looking for a slightly more upmarket Adriatic experience.

Campania
Italy’s most celebrated coastline is the Amalfi coast, with its sheer cliffs tumbling down to secluded coves lapped by the turquoise waters of the warm Tyrrhenian Sea.

This is Italy for the romantic. When young Italians in love want a few days away to cement their courtship, the Amalfi coast is where they’ll go, declaring their love for each other amid the terraced vineyards and lemon groves, wandering hand-in-hand through gorgeous fishing villages such as Positano, oblivious to the mass of foreign visitors who populate the coastline between April and September.

Another popular option is to escape to the islands in the Bay of Naples. Capri and Ischia are popular daytrips – Capri’s electric-blue grotto and the bubbling waters of Ischia’s thermal springs are always crowded in summer. But Italians in the know favour Procida’s crumbling pastel villages, if only because there are fewer tourists.

Puglia (Apulia)
In recent years, Italians have blazed a summer trail southward and discovered the sun-bleached landscapes of Apulia, driven as much by stretched budgets as an itch to find somewhere new to lay their beach towels. Traditionally poor, Apulia remains one of the cheapest places in Italy to do anything, from camping to eating.

One current hotspot is the Penisola Salentina, better known simply as Salento, stretching across the heel from Brindisi to Taranto and down as far as Santa Maria di Leuca.

The most popular resort is Otranto on the east coast: the beaches are bleached white and the sea is the perfect shade of blue. Italians looking for a bit of privacy tend to congregate in the private beach club of Atlantis, on Otranto’s northern promontory, which is also where the nightlife is most lively.

Virtually every village in Salento has a summer festival. The most interesting is La Notte della Taranta in Melpignano, where everyone loses themselves in a night of pizzica, a sensual, hysterical dance that you won’t see anywhere else in Italy.

Sardinia
Sardinia has some of Europe’s most beautiful beaches and some of the cleanest, bluest seas you’ll find in the Mediterranean, and Italians are jealously protective of them. Everyone has their favourites. The billionaires and their coterie of celebrities and supermodels like to dock their yachts along the scalloped bays of the Costa Smeralda (Emerald Coast) on Sardinia’s northeastern shore. Silvio Berlusconi has a villa here. The Costa Smeralda’s beaches are breathtakingly beautiful, lapped by crystal-clear waters and backed by macchia, a scrubland of perfumed wild herbs such as thyme and oregano.

However, many Italians deride the Costa Smeralda as overpriced and soulless, opting instead for spots on either side of it. At the northern tip of the island is Santa Teresa di Gallura, which gets extremely busy in high season but still manages to hold on to its local character. To the south, along the eastern coast, the beaches of San Teodoro are every bit as beautiful as those favoured by the glitterati. Cala d’Ambra is lovely, while Spiaggia La Cinta – 2km to the north – is both beautiful and popular, especially among kitesurfers.

Further north again is Cala Brandinchi, known as “Little Tahiti” for the quality of its sand and azure seas. The marine reserve of Capo Coda Cavallo, 13km north of San Teodoro, is also popular and attracts snorkellers and divers.

On the west coast, the quartz beach at Oristano is popular with holidaymakers from the mainland, as is the Stintino peninsula to the northwest.

Sicily
Until relatively recently, the beaches of Sicily remained largely undiscovered by the mass of Italian tourism. The sole exception was Taormina, on Sicily’s Ionian coast. The island’s most popular resort was once the preserve of holidaying high-rollers, but has since broadened its appeal and in the summer months is packed with Italians from virtually every part of the country.

Just north of Catania, the Riviera dei Ciclopi has a handful of sandy beaches that have become popular as a value-for-money alternative to Taormina. Its most prominent feature are the hunks of black lava rock towering out of the sea. According to legend, they were thrown by the blinded Cyclops Polyphemus as he tried to stop Odysseus from escaping.

On the western side of the island, the seaside town of San Vito Lo Capo has established itself as one of the most family-friendly resorts on the island, fronted by a huge beach that during summer months is packed with sun-worshippers.

The seven Unesco-protected Aeolian Islands, off Sicily’s northeastern coastline, have also become a popular summer destination, particularly with boating Italians. Landlubbers tend to favour Lipari, the largest and liveliest of the islands, but Salina and super-chic Panarea are also well-visited.

Tuscany
The genteel alternative to the popular Adriatic coast has always been the belle époque resorts of western Tuscany’s Tyrrhenian coast.

Forte dei Marmi and Viareggio were once the favoured resorts of the Tuscan aristocracy, who would spend their days taking in the sun at the beach clubs and their evenings strolling along the passeggiata, the elegant boardwalk lined with * grand cafes and restaurants.

The towns are far less discerning these days, but the daily price of a beach club is still among the most expensive on the mainland. And while the beaches are pristine, the sea is less so – it lacks the crystal clarity that makes Sardinia and southern Italy such attractive propositions.

In southern Tuscany, Castiglione della Pescaia is another popular spot. It is near the port of Piombino, from which the hydrofoil and ferries depart for Elba, which in August is packed cheek-by-jowl with sun-worshippers seeking to enjoy the coves of this stunningly beautiful island.