Our wedding story: From the Six Nations to Ballinacura House, Kinsale 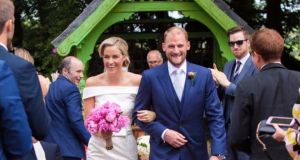 They were married in July in an outdoor humanist ceremony, in Kinsale, Co Cork. 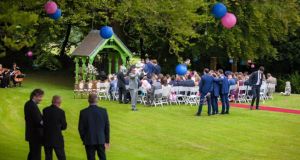 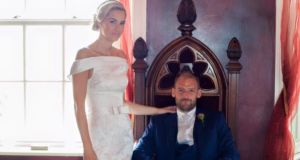 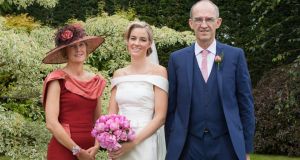 Róisín (31), a legal recruiter who grew up in Ardclough, Co Kildare met Welshman Greg (34), director of his recruitment business, in London, where they would meet with mutual friends to watch the 2010 Six Nations rugby tournament.

“After a few weeks of pursuit over text, I agreed to a date,” said Róisín. “We went out for drinks in Clapham and that was it really. I think we both knew it was going to be something big even after that first date.”

In June 2014, Greg proposed, at a hotel in the New Forest, with a ring he had had made.

They were married in early July this year, in an outdoor humanist ceremony at Ballinacurra House, in Kinsale, Co Cork. The Delta String Quartet played Stand by Me by Ben E King as Róisín and her father, both born in Co Cork, walked up the aisle. Roisin’s uncle Colm drove them from her aunt Margaret’s house where she, her parents John and Marie Griffin, and two bridesmaids had stayed the night before.

“I spent a lot of my childhood here as my cousin and maid of honour Eimear lived here, so it feels like a second home,” said the bride, who wore a dress by British designer Alan Hannah.

“My younger cousins did lots of DIY for me – they made little hearts that lined the aisle, they also manned our photobooth, guestbook and made sure everyone took photos with our Polaroid camera for our book. My aunt Niamh found our wine so we had so much help.”

Roisin’s brother Aidan was master of ceremonies and her aunt Liz and grandmother Mairin (“Mum” to everyone in the family and the couple’s only remaining grandparent) made the cake, with help icing from Kinsale Cakery.

During the drinks reception, The Cuban All Stars played music, and after dinner House Party band and DJ came on. The first dance was to You Make Loving Fun by Fleetwood Mac, the title of which also appeared on their cake topper.

On the second night of celebrations, traditional Irish music by Arundó gave overseas guests a taste of the bride’s homeland.

The couple, who live in Surrey, had a short break in Santorini and will honeymoon in Singapore and Malaysia for three weeks in December.

A letter to my father: Did you regret leaving Australia?
2

How will the Covid-19 era affect our youngest citizens?
7