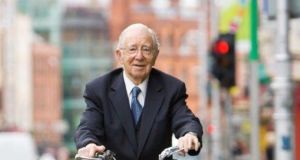 Stanley Asher Siev, who has died aged 92, was a solicitor for almost 70 years and was involved in some of the State’s highest-profile cases. Appointed Ireland’s first Jewish public notary, he was also a life president and trustee of the Irish Jewish Museum in Portobello, Dublin.

Stanley was one of two sons of Edith and Albert Siev. The family had fled anti-Jewish pogroms in eastern Europe at the end of the 19th century. Albert and his wife Edith first settled in Lombard Street in Dublin – in an area that was home to many Jewish families and dubbed Little Jerusalem – where Stanley was born on Christmas Day in 1921.


Excelled at rugby
Stanley received his secular education in St Catherine’s School in Donore Avenue. He later went on to the High School, where he excelled at rugby, playing in every cup team between 1935 and 1939.

After High School he entered Trinity College, where he studied law and Oriental Languages. He qualified as a solicitor in 1946 and established a practice specialising in landlord and tenant law, later moving on to criminal defence.

He set up his practice in 31 Aungier Street, a house in which his family lived when he was a child, and he continued to work there until recent months during which time he also commuted occasionally from his daughter Sarah’s home in Manchester.

Stanley also loved Dublin’s cultural and architectural heritage. No 31 is one of the few remaining Huguenot houses and he doggedly held out against the developers of the apartment blocks that surrounded the house.

In his early career as a solicitor, Stanley worked closely with leading barristers such as Séamus Sorahan SC, often on difficult cases involving republican defendants in the criminal courts and later in the Special Criminal Court.

One high-profile case in which he had an unexpected involvement was the 1975 Monasterevin siege in which Dutch industrialist Tiede Herrema was held hostage by republicans Eddie Gallagher and Marion Coyle. Stanley told of being called from his bed in the middle of the night to act as an intermediary in an attempt to have Dr Herrema released from captivity in a council house, outside of which the world’s press was camped.


Devoted to Jewish faith
Stanley was especially devoted to his Jewish faith and was closely involved in all aspects of his synagogue in Terenure; he was also a founding member of the Irish Jewish Museum on Walworth Road in Portobello, and one of its life presidents.

His father, Albert, had the idea of turning the former synagogue into a museum that would celebrate Ireland’s Jewish history within the old Little Jerusalem area.

His younger brother Raphael, a barrister and diplomat, was curator of the museum, and the Siev family endowed the building in the name of their mother Edith.

Stanley’s last few years were overshadowed by the sudden death in 2009 of Raphael, with whom he had a very close bond.

A strong believer in remaining mentally and physically active, even in his advanced years, Stanley was a regular sight around the city he loved, on his bicycle and carrying his leather briefcase. His favourite pastimes, he said, were “cycling in the lowlands and hiking in the highlands”.

He is survived by his wife Rosel, three daughters Sarah, Raiselle, Lydia, son Donald, step-daughters Carolyn and Sharon, and also by his many grandchildren and great-grandchildren.