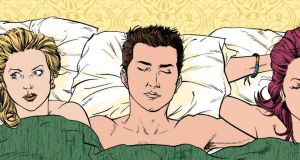 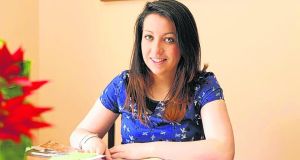 Kaila Dunne: believes the focus should be on healthy relationships. Photograph: Liam Burke/Press 22 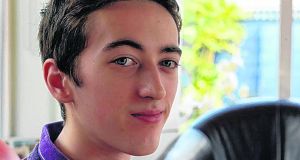 Mark Caffrey: believes the focus should be on healthy relationships. Photograph: Cyril Byrne

“Girls as young as 12 are so sexualised that they post pictures of themselves plastered in fake tan and make-up, the fewer clothes the better, on Facebook, Tumblr and Twitter,” she says. “They spend hours in their bedrooms getting ready to go out to discos, practising posing and Photoshopping, all to get 30 to 40 ‘likes’ from boys. It’s tied in with sexual activity.”

It’s part of the culture of keeping your virginity but still having sexual experiences, online and in person, she says. “I think it’s awful. I can’t get over it. Girls aged 12 to 14 are putting things out there that they shouldn’t.”

“Early sexualisation is out of control,” says Mark Caffrey, who is 15 and in third year at Ratoath College, Co Meath, where, he says, sex education was “rushed through”.

He and his peers were taught the biology of sexual intercourse but not the facts and feelings around this and the many other forms of sexual activity they were engaging in. As a result, his generation “were influenced by crazy things: viral videos of sex with a horse”, among others.


Unhealthy relationships
This week I interviewed dozens of teenagers across the country, and few of them sounded as though they were enjoying themselves, at least not in the way that people are supposed to enjoy healthy sexual relationships. Sex acts are notched up like items on a to-do list, while the pressure to look and perform properly has even young men worried about their body hair. Some believe they have to wax it off before they have sex, says Teresa Bergin, a psychotherapist specialising in sexuality.

Bergin encounters men suffering erectile dysfunction in their 20s as a result of multiple sexual partners and the pressure to perform in their teens. Some are now unable to have erections with real women, because they have had such intense experiences with pornography. They need therapy in their 20s to learn to enjoy sexual intercourse in a relationship.

“Sexting” has become as common as going to a dance in the past. It can be limited to verbal flirting by text message, but can also involve teenagers sharing suggestive or explicit photographs of themselves.

More hard-core imagery can appear on Facebook pages under fake identities, which is upsetting for young people who have grown to regard the social-media site, perhaps misguidedly, as personal space. “Facebook has become like a report card telling you how well you are doing sexually,” one young woman says.

Are these practices truly widespread? Perhaps not, and certainly not every teenager is experiencing them. But they cropped up regularly in this set of interviews. Even allowing for the excitability of young minds, it is clear these habits have embedded themselves in teenage sex culture.


SpunOut controversy
The subject of teenage sexuality arose in the media this week when it emerged that the HSE-sponsored mental-health website spunout.ie had offered advice on having threesomes. The controversy was ignited by the disapproving comments of the Fine Gael TD Michelle Mulherin. It was heavily debated by adults in both traditional and online media, many of whom probably have a limited understanding of the cybersexual world of teenagers.

Bebhinn Wynne Judge says there is intense pressure to experiment sexually, in ways that make threesomes appear tame. This is disturbing to young people, she says. “It’s about time we woke up and smelled the coffee and educated these young people before they end up pregnant or very, very ill,” she says.

Amanda Chambers, an IT and social- media expert, parenting-class teacher and Parentline volunteer, believes adults are completely out of step with the changed reality of teenage sexuality. “My impression is that parents don’t know what’s going on out there, or maybe they don’t want to know because they would be shocked. On Parentline, we rarely get parents calling with concerns about their children and sex.”

Mulherin’s intervention over SpunOut at least shows that she is one adult who is paying attention. Mark Caffrey appreciated her comments. “I know 13- and 14-year-olds who have accessed SpunOut, and it’s not suitable. We have to think about child protection where under-16s have access. The site gives great advice in other areas, but you can’t be so blunt and open: you have to be moral and responsible,” he says.

The article Mulherin criticised, which offered advice on threesomes spicing up young couples’ sex lives, has been rewritten to highlight the downsides. The edits have been approved by HSE staff. The original version was written in response to discussions among teenagers, says John Buckley, the youth engagement officer of SpunOut.

Mulherin sees the presence of the advice as “a most regressive, unenlightened view of sex, in that it’s suggesting that a person be objectified for others’ gratification and trivialises the emotional aspect. The point that seems to be lost on people is that 16-year-olds are not adults. They are at a transitional point in their lives. Informative, educational advice should encourage and promote good mental health and sexual wellbeing and recognise the emotional aspects of sex.”

Teresa Bergin agrees. “The audience for SpunOut is too young to be pressured into threesomes. That age group are not mature enough to engage in that activity, which is for mature, sexually experienced people who know what they’re about and what they want sexually, not for a sexually immature group. I think we have to acknowledge that young people are far more sexually aware than they were, but that kind of advice should not be encouraged at that age.”

John Buckley, who is 27, believes that by encouraging sexual wellbeing, SpunOut is filling the gap in inadequate sex education. “In school, sex education didn’t go beyond sexual penetration and STIs. There is so much more to it, such as the emotional impact and relationship building,” he says.

Kaila Dunne says she could not get over the outrage about SpunOut. Its critics were “focusing on one thing, not on all the other fantastic things SpunOut has done: it’s attractive, friendly and approachable.”

SpunOut.ie is designed for people aged 16 and over, but under-16s can easily access it. Orla McGowan of the HSE’s Crisis Pregnancy Programme points out that, for this age group, the HSE also funds the site b4udecide.ie.


A greater problem
The problem and the solution, young people say, is far greater than threesomes and accessing information online. “You can’t learn about real relationships online without interacting in real life,” says Mulherin.

Irish teenagers may be living in a sex-mad, porn-soaked world, but there are some encouraging indications that many of them are dealing with it quite well. For example, there has been a 44 per cent decline in teen pregnancies in the past decade.

The Crisis Pregnancy Programme notes that research on the age of first sexual intercourse and teen pregnancy shows “good evidence that the relationships and sexuality education programme is working and having a very protective, positive impact on young people”.

You wouldn’t know it to listen to Sarah McCarthy, a 21-year-old who is in her third year studying arts and human rights at NUI Galway. She says, “I definitely wish I’d had more sex education. I would have liked to have had lessons in consent and how to handle different situations. From the age of 10 to 17, it felt like a taboo topic.”

“Our sex education was minimal and mechanical,” he says. “In biology we were told a man inserts a penis into a woman’s vagina, as if it meant very little to someone’s needs and feelings. [We did not learn] that sexual intercourse could be a recreational act and not just a means of procreation.”

Even if teenagers remain virgins until 17, they can still do everything else. Peer pressure to have “done” certain acts by mutually agreed deadlines often involves oral sex.

Painful and prolonged anxiety about sex dominated Donegan’s teenage years. It does so for many young people, and has done for generations. In her case this was a result of a humiliating experience at the age of 12 among her peers in sixth class, who felt pressured to get certain activities “out of the way” before secondary school.

Donegan refused to participate. She waited until she was 20 and in a relationship before she lost her virginity, but felt she was the odd one out. At no point did sex education at school ease her anxieties.

A gay teen was advised not to have sex, by a religious health-education group brought into his school.


Pick and choose
Sex education in schools is not standardised: individual schools pick and choose aspects of programmes, so the information can be minimal in some schools.

Orla McGowan of the Crisis Pregnancy Programme works with the Department of Education in providing social, personal and health education support services for schools, and 400 teachers are trained each year. “It’s a good idea for schools to design their own programmes, because schools can be very different. How they implement it, they decide themselves.”

The ideal is to facilitate a range of activities that help young people to develop “their own idea of a healthy relationship and how they want to behave and be treated”, she says. A weakness, though, is that such instruction is supposed to be a partnership between parents and the school. If parents do not advocate for it, the school might think there is little enthusiasm for sex education.

Anita Ghafoor-Butt of the Irish Family Planning Association is highly critical of the HSE’s approach. “I would be extremely concerned that young people are not getting the information they need in an accessible way. We run a life-skills programme for transition-year students, and young people are saying they are not getting the sex education they need. It’s biological and based on reproduction. Life skills and healthy relationships are not being covered.”

As Kaila Dunne says, “Schools teach you how to be safe, but they can’t teach you your morals.”