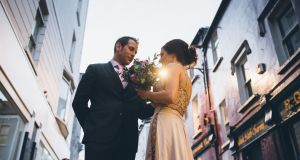 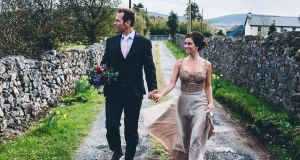 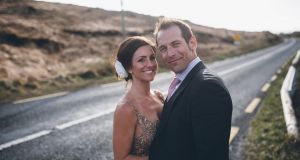 Matt from Chicago and Californian Bonnie were introduced over FaceTime by mutual friends. After three weeks – and “hundreds of hours on Skype” – they met for the first time in Atlanta airport.

Bonnie – who owns an events business based in Cabo, Mexico – was travelling in the States, and Matt, a sales manager for a golf apparel company, had arranged for his flight home from a business trip to layover there. Before taking the same flight to West Palm Beach, they shared a bottle of wine and have been an item ever since.

Matt, who has three daughters – Bryce, Grace and Kaia – had been to Ireland several times before and suggested it as a wedding destination. Bonnie agreed and the couple eloped.

On April 16th they had a drink in Tigh Neachtain, Galway, and wandered around the city in search of “the perfect street” – this turned out to be Abbeygate Street Lower.

The bride remembers, “it was about 8.15pm so we decided to wait a bit longer for the street lights to come on before we had the ceremony. It was chilly, so we slipped into another pub, Garavan’s, for one more pint while we waited for twilight. At about 8.45pm I asked Matt if he was ready to get married, and he said yes. So we walked out to the street and got married.”

During the ceremony, officiated by Ciaran McCauley from Marry Me Ireland, special mentions were included for Matt’s late father John – whose eighth anniversary it was – and Bonnie’s grandmother whose 95th birthday was that day also. The bride wore a custom-made Gena Cristiani dress.

Before flying back to the US, Matt and Bonnie spent 10 days driving around Ireland.