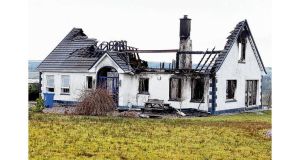 A house at Ballyshannon, Co Donegal that was destroyed by fire days before members of the Traveller community were due to move in. photograph: thomas gallagher

These words look like relics of Ireland’s past; they seem to belong to a time when we whispered about “fallen women”, and “improper acts” between men. Now that we have matured into a society that no longer locks up “bold girls” or criminalises homosexual men, we don’t like to recall that we ever saw the world in such stark terms.

It’s heartwarming how much we’ve all moved on, isn’t it? Let’s give ourselves a big pat on the back – we have matured into an inclusive, humane society; a society capable of acknowledging and even apologising for the wrongs of the past; a society that recognises that “different” doesn’t always mean “inferior”.

Unless, of course, we’re talking about Travellers. Because, unfortunately, these words don’t actually belong to our past – they were all taken from recent internet discussions on Travellers.

The kind of casual, venomous racism that Travellers are still subjected to, even by mild commentators in benign contexts, will prove one of this society’s last great, collective shames.

At school 30 years ago, I don’t remember anyone questioning why the Traveller children always seemed to be seated alone at the “bold desk” or why they were universally referred to by the rest of us as “smelly”.

Since then, the discrimination may have become more subtle, but it hasn’t gone away. I have routinely been met with incredulity when I expressed the view that perhaps all Travellers weren’t bad news – in conversation with friends; in taxis; by members of the public in my role as a journalist; and once, memorably, by a uniformed garda.

If it was just the occasional crude generalisation and the odd anonymous online outburst that Travellers had to contend with, they’d probably consider themselves fortunate. Earlier this month, a house at Ballyshannon in Co Donegal was burnt down, days before the Ward family – Travellers who had lived, they said, without incident in the town for more than four decades – were due to move in.

If this had been the house of an African family, or a Jewish family, or a family headed by a same-sex couple or single parent, it’s likely there would have been mass protests at this KKK-style burning. Instead, what greeted the news was a broad indifference.

Speaking about the incident last week on local radio, Jimmy Ward said that his children were “ashamed on their life to go to school at all” since the incident – despite being the victims of it.

It is not about where “we” want “them” to live; Travellers have as much right to a home in a place of their choosing as anyone else.

The arson attack wasn’t the only example of prejudice: it came in the weeks after local Fine Gael councillor Eugene Dolan was reported as saying that Travellers could “be sent to Spike Island for all I care”, and Bundoran Fianna Fáil councillor Sean McEniff suggested Travellers should live in isolation. Their parties distanced themselves for the remarks, describing them as “personal views”, but neither man was asked to resign or to withdraw their comments.

Minister for the Environment Phil Hogan didn’t see any reason to apologise either over a letter he wrote to his Co Kilkenny constituents last year, assuring them that a Traveller family would not be moved into their area. Neither did District Court Judge Seamus Hughes, who last year called Travellers “Neanderthal men lying in the long grass and living by the law of the jungle”.

In the UK, Irish Travellers have been recognised as a distinct ethnic minority for 13 years.

Many Irish people resist the idea of a distinct ethnicity for Travellers – but it’s not clear that they rate Travellers as full citizens with equal rights, either.

According to the 2011 Census, there are 30,000 Travellers in Ireland. There are problems with feuding and antisocial behaviour with some elements of the community, but as settled people, we’re far too quick to hold the entire community responsible.

Criminality is not, as the playwright Rosaleen McDonagh wrote in this newspaper recently, in Travellers’ culture or in their DNA. Some Travellers are petty criminals, for sure; just as some are celebrated writers and some are Olympic boxers. Some have big dreams for the future; others just want to get through the day. Some are articulate human-rights campaigners; others cannot even write. They are mothers and fathers and aunts and cousins and grandparents and good neighbours and schoolfriends.

In other words, they are just as amorphous and flawed and ugly and beautiful as any other member of society, only with significantly fewer advantages than most.

Their nomadic lifestyle makes the provision of appropriate healthcare – along with education and housing – more difficult, with the result that Travellers’ health statistics are similar to those of people living in the developing world. Three per cent live to 65. Their mortality rate is three times the national average; their suicide rate is six times. If their ethnicity was recognised, indices such as these couldn’t be ignored.

Instead, we go on brushing the “Traveller issue” under the same threadbare carpet where we have always tucked away all the societal ills we didn’t want to think about. Earlier this week, it was revealed that since 2007, local councils have failed to draw down more than €50 million allocated to them to provide Traveller housing.

But when the rest of the world points these failings out to us, or suggests that maybe we could be doing more – as the European Commission against Racism and Intolerance’s (ECRI) fourth monitoring report on Ireland did only last week – we stick our fingers in our ears, rock on our heels and whistle loudly. Just as we’ve always done.

How much more time will need to pass before it becomes unacceptable to neglect or denigrate an entire section of our society, simply because they don’t conform to our version of “normal”? Another five, 10 or 20 years? Or for Travellers, will that day ever come?

Child-free flights? I'm on board

The debate about children on planes was reignited in the US recently, after a passenger on a Delta flight allegedly slapped the crying child who was seated next to him.

Joe Rickey Hundley turned himself into the authorities last week, although he denies hitting the wailing two-year-old.

It was a horrible incident, not least because of the racist undertones; Hundley allegedly told the child’s mother to “shut that [racial slur] baby up”.

But it does raise the question – would childfree flights be a good idea? Or even childfree sections on planes? I say “yes”.

My children are thankfully past the crying-on-planes stage, but I have been the harassed mother trying to soothe a fractious toddler and an inconsolable baby, while all around me willed themselves not to slap someone.

On another occasion, my children were sleeping quietly when a distraught baby across the aisle incited the air rage of another passenger, who screamed at the airline staff to move him to another seat. They moved him to the row in front of me, and I spent the rest of the flight in abject terror that one of my children would whimper and set him off again.

I would happily be segregated into the ranks of howling babies and sympathetic parents, rather than face the wrath of another air-rage man.

Equally, when I’m travelling without my kids, I don’t want to be anywhere near yours.

Breaking up the boys' club in the Dáil

A new report on women and power in the UK has revealed that only Italy and Ireland have lower rates of female representation in political life.

The report includes a graph showing the number of women MPs in eight western countries. Ireland lurks at the bottom, and, more depressingly still, the line has barely moved in 12 years.

Plans to introduce a mandatory 30 per cent quota for political candidates will go some way to addressing this, but it’s not enough. There are many good reasons why Irish women might not want to pursue a career in politics: the unsocial hours; the testosterone-fuelled atmosphere of the Dáil; the logistical difficulty for women with families in dealing with the demands of spending your evenings knocking on doors in the run-up to election time.

There is no magic wand – we need to begin by tackling the boys’ club atmosphere one step at a time.