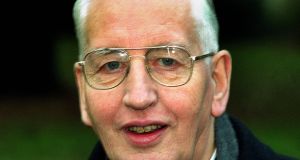 Cardinal Desmond Connell, who has died aged 90, was a surprise appointment to the Archbishopric of Dublin in 1988 but he went on to become the first Archbishop of Dublin to have been made a cardinal in almost 120 years.

He was elevated to the position by Pope John Paul II and would be seen as sharing that pontiff’s conservative views, the public articulation of some of which brought controversy upon his episcopacy at times.

He headed the archdiocese at a difficult time for the Irish Catholic Church; scandals such as those of Bishop Eamon Casey and Fr Michael Cleary broke during the 1990s, but it was the scandal surrounding the handling of child-sex-abuse allegations that did the most damage to Cardinal Connell, both personally and as regards his reputation.

He was born in Phibsboro on the north side of Dublin city. His father John, the son of an RIC sergeant from Moycullen, Co Galway, was a civil servant who was appointed by Seán Lemass as managing director of Comhlucht Siúcra Éireann. His mother, Mary Lacy, had been working as a telephonist in the GPO when it was taken over at Easter 1916 and she was brought to safety by The O’Rahilly. Connell snr died when his son was 13 and the family of three boys moved with their mother to Ballymun Road.

He attended St Peter’s National School in Phibsboro before moving to Belvedere College, where he showed he had inherited his parents’ musical interest and talent by taking part in Gilbert and Sullivan operas. His love of music was lifelong, Bruckner, Mahler and Elgar being his favourite composers.

In 1943, he entered Holy Cross College, Clonliffe, the diocesan seminary, and began studying philosophy in UCD, from where he emerged with a first-class honours BA and MA.

Following his graduation from St Patrick’s College, Maynooth as a Bachelor of Divinity, he was ordained in 1951 and got his doctorate after two years at the Pontifical University of Leuven, where his subject was the 17th-century French philosopher, Nicolas Malebranche. He began lecturing in metaphysics in UCD in 1953 and published his main work, The Vision in God: Malebranche’s Scholastic Sources, in 1967. He was appointed professor of general metaphysics in 1972 and became dean of the faculty of philosophy and sociology in 1983.

In an Irish Times profile (April 27th, 2004), Patsy McGarry described him as “a particularly conservative metaphysician … He was an authority on the medieval philosophers, particularly Thomas Aquinas, but denied any hostility to modern thinking while of the view that since the time of Descartes, philosophy saw man as the measure of all things. In his belief, reality was complete only in the perception of the divine, while man’s perception was partial.”

Students and colleagues at UCD found him at all times to be pleasant, approachable, courteous and generous with his time and he proved a popular head of department.

His appointment as Archbishop of Dublin in 1988 was unexpected. He had served only six months in a pastoral ministry, as a chaplain at the Mater Hospital, and that was just immediately after his 1951 ordination. He made an initial positive impression as he spoke out on social issues such as unemployment, Travellers and the disadvantaged generally, and was one of the first senior national figures to call for better treatment for refugees and asylum-seekers.

But theologically, he “quickly proved himself a staunchly conservative prelate”, according to a Sunday Business Post profile (April 14th, 2002). His position was unequivocally orthodox on divorce, abortion, contraception, homosexuality and women priests.

His use of language at times could be described at worst as insouciant, at best as naïve but certainly lacking in sensitivity. When the then president Mary McAleese took communion in Christ Church Cathedral in December 1997, Archbishop Connell appeared to describe Anglican Communion as a “sham”. During the ensuing public controversy, he said in an Irish Times interview (December 22nd, 1997) that the Eucharist is the “foundation of our Catholic identity. Taking Communion is an expression of faith – isn’t it a pretence to partake if you’re not buying into what you’re doing and if you do not share the faith?”

He caused further offence in late 2001 by saying, in an interview he did for a book, that his Church of Ireland counterpart, Archbishop Walton Empey, was not one of his church’s “high flyers” and “wouldn’t have much theological competence”.

A member of the Congregation for the Doctrine of the Faith since 1993, he was made a cardinal in 2001.

But it was his handling of clerical child-sex-abuse issues that caused him most problems. In 1995, he denied that the archdiocese had ever paid compensation to victims of abuse by its priests, although it emerged in 1998 that he had lent money to Fr Ivan Payne to compensate one of his victims. In April 2002, it was revealed that he had not told gardaí that Fr Paul McGennis, who had abused Marie Collins in 1960, had admitted to the crime. RTÉ’s Prime Time’s “Cardinal Errors” programme in October 2002 criticised his handling of cases involving eight priests of the archdiocese who had been involved in child sex abuse.

The 2009 Murphy Report found he had handled child-sex-abuse allegations “badly” and was “slow to recognise the seriousness of the situation”. However, it praised him for making records available to the authorities in 2002 and for, in 1995, having provided the names of 17 priests who had been accused of abuse, although it pointed out that accusations had been made against at least 28 priests in the Dublin archdiocese. The report also criticised him for his use of the concept of “mental reservation”, which he explained to the commission as “in a sense, a way of answering without lying”.

On the other hand, it could be argued on his behalf, as one commentator has, that, “in fact, he tried to balance the needs of genuine victims of child abuse against the rights of accused priests to be considered innocent until proven guilty”.

The child-sex-abuse scandal took a huge toll on him, physically and psychologically. “I am as human as any of you … It is the issue that has devastated my period of office,” he told the media in April 2002. He retired as Archbishop of Dublin in April 2004.