No Lette up for women making their mark

It’s still a man’s world and women are still runners-up. Just don’t ask us to polish the glass ceiling while we’re up there 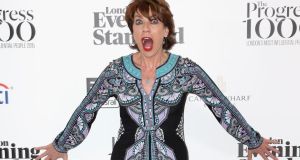 Novelist Kathy Lette has long been known for a particularly fun kind of trouble courting: a sort of shouty, salty Antipodean who joyously ruffles the politesse of British society. She, for instance, thinks nothing of asking Prince William if he “wanted tongues” during a photo op at a polo match.

When we meet, at the Cheltenham Literary Festival, she’s certainly staying true to her “mouth from the south’ reputation. I’d been warned that Lette (56) has a gimlet-eyed quip for every occasion. Sure enough, the truth-telling comes at a rate of knots.

“There’s a lot of faded cord, tweed and a lot of beard action,” she observes of her fellow authors. “The women aren’t much better, with piles of dandruff around their feet. I know authors are on their own a lot, but people paid to come and see you.”

We’re talking workplace attire for a reason: on Women’s Enterprise Day (October 22nd), she comes to Dublin for The Gloss magazine’s Look the Business event, in association with Vodafone. Some 900 businesswomen will convene to discuss the vagaries and challenges of working life, from dealing with childcare and office attire to the much-perceived glass ceiling (“We’re asked to clean it while we’re up there”).

Rest assured that Lette, a longtime and impassioned feminist, will have plenty to say on it all.

“It’s still a man’s world, and women are still runners-up,” she says. “We no longer want seats on the bus … we want seats on the board. Our main accessories are the hearts on our sleeves and we need to toughen up more. We’re decorative and demure and docile. Well, screw that.”

Chief among her gripes is the idea that most of the housework and childcare responsibilities within families still fall to women. Lette married eminent human rights lawyer Geoffrey Robertson in 1990. He may be a leader in his field, defending the likes of Julian Assange, but how does he approach the idea of sharing the domestic load? After all, he was dating the original domestic goddess, Nigella Lawson, when he met Lette in 1998 on an episode of his TV show Hypotheticals (for what it’s worth, Lawson is now a good friend of Lette’s).

“Here we are, liberated and working full-time but exhausted and angry, You’ve got to find the time to defrost the chops, put the kids to bed, iron shirts, put the cat out, and by the time you fantasize about sleep, you get, y’know, the hand creeping over from the other side of bed. I mean, when he hasn’t talked to me all day and he tries that, I’m in the mood for running through him with a frigging carving knife.”

Robertson may well need to attend what Lette calls domestic retraining school, but he is a feminist in many respects, and has a particularly good knack for unearthing and nurturing new legal talent. Among his charges are legal leading lights such as Kirsty Brimelow and Amal Clooney. Which is how Lette found herself entertaining George Clooney in her north London home recently.

“He’s gorgeous, as you can imagine, and the best thing is when he comes to dinner he clears away the dishes and stacks the dishwasher, which is pretty much foreplay for all females,” laughs Lette. “When my husband brought his new junior [Amal Clooney] home for the first time I was like, ‘Are you joking? Does she have to be this goddess?’ ”

Lette’s last novel, Courting Trouble, focused around a mother-and-daughter solicitor’s office. It was a way to explore not just the sexism in the legal profession that she has pretty much lived and breathed for 26 years, but also issues such as rape, sex grooming and domestic violence in a wider sense. The book bears the hallmarks of Lette’s other writings – spicy and packed with charming quips – but is also a frontline report from the coalface of feminism.

It’s only when Lette mentions her 24-year-old son Julius, who has Asperger’s syndrome, that the devil-may-care persona falls (her book, The Boy Who Fell To Earth, details her experience of having a child with autism).

“Other mothers without a child with special needs have no idea,” she says. “When I do talk, I do highlight the positive side of it, though. Julius has no filter, so it’s like having a shock absorber strapped to your brain as a mother. I took him to 10 Downing Street when he was 13 and introduced him to Tony Blair, and he said, ‘Oh yes you’re the one my mother calls Tony Blah Blah Blah’. But Jules has made me more humble and more compassionate towards other people. He’s taught me that there’s no such thing as normal and abnormal, just ordinary and extraordinary.

Her 22-year-old daughter Georgina, having done away with the “Atila teenage years”, is “at the barricades”, a brainbox with the same keen sense of social justice as her father.

“When [teenage daughters] go through that feral stage, it’s like living with the Taliban,” says Lette. “The trick is to stay friends with their friends. My top survival tip for mothers of teenage daughters is, if she’s hitting and kicking and saying she wishes you were dead, take a drag of your ciggie and large mouthful of wine and say, ‘I’m doing my best, darling’. ”

Lette’s other womanhood survival tip is to surround herself with a tight gang of like-minded women, among them Sandi Toksvig, Maureen Lipman, Ronni Ancona and Jo Brand.

“We laugh our heads off but we’re all very political as well,” she reveals. “Women are each other’s Wonderbra. They give you support and make you look fab.”

Several of Lette’s friends are regulars on the comedy circuit, prompting Lette to once pitch an all-female panel discussion show to broadcasters, albeit to little avail.

“Believe me I’ve tried ... there’s a movable feast of female talent on British TV,” she asserts. “I think we just need to storm the BBC and put HRT patches all over the walls. I mean, how old is someone like [Jonathan] Dimbleby… 410?”

Even in the ostensibly egalitarian world of popular fiction, Lette observes a sort of double standard still lurking below the surface.

“I say that any mother who finishes a novel should get the Booker automatically, just for finishing the thing,” she laughs. “Meanwhile, male authors get to squirrel themselves away in the attic. ‘Shhh, Daddy’s writing, genius at work’. Let’s just say mothers don’t get time for writer’s block.”

Still, Lette cites humour as the best artillery at a woman’s disposal.

“Women are not as physically strong, but we’re more verbally dexterous,” she observes. “It’s not effective being angry [at casual sexism in the workplace], but if you pinprick a man’s pomposity and make the man the butt of the joke, you take away his power. Never go out without some one-liners tucked up in your trouser leg.”

Still, for all Lette’s enduring popularity as a novelist, she still isn’t impervious to the slings and arrows of plain old-fashioned sexism.

“I wore leopard print one night and the papers wrote, ‘she thinks she’s a cool cat but she’s a shabby tabby’,” she recalls with a smile. “I mean, who is this telling me what to wear? But then ageing is supposed to be to women what kryptonite is to Superman. Personally, I think it’s a really interesting time for women, especially older women.”

While menopause is something that Lette refuses to worry about, her career may well come full circle soon. For a start, she is considering a shift towards writing plays.

The film rights to The Boy Who Fell To Earth have been snapped up by actor Emily Mortimer, and Lette has a hankering for her former life as a sitcom writer in LA (in a rather neat twist, she worked on The Facts Of Life, which starred George Clooney).

Whatever the future holds, Lette’s reaction to what the calls the “condescension chromosome” is to kick back with even more biting, spicy wit.

“I’ve looked up so many noses in my life,” she surmises. “We can’t have women take another 50 years before we have equal rights. I was at a party with a friend who is a judge, and an older male judge approached us. She told him, ‘I’m a judge’, and he immediately shot back, ‘of horses or dogs?’ Honestly, I’d have used his testicles for maracas.” Somehow, you don’t doubt it for a second.

The Gloss Magazine’s Look the Business event, in association with Vodafone, is at the RDS on October 22nd. For more information, see lookthebusiness.ie.