Saying thanks to the bus driver – in Italy people would ask ‘what’s wrong with you?’

New to the Parish: Mariarita Arenella arrived from Italy in 2013 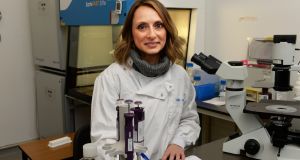 Mariarita Arenella always wanted to work in a lab. When asked as a child what her dream job would be her answer was always “a chemist”. With a geologist mother and an engineer father, it was almost inevitable that this young Italian would end up in science. What the family never foresaw was that Arenella would find herself working for a research organisation in a rainy city thousands of miles from her home in southern Italy.

“I honestly don’t know why I said chemist but since I was little I loved the idea of being able to play with all the equipment in a lab. At school in Italy you learn loads of theory but you never actually did experiments. They felt it wasn’t safe so we would just listen to our teachers talking.”

Arenella grew up in the town of Salerno, south of Naples on the Amalfi Coast. After school she moved to Pisa to study biomolecular science and then to Florence where she began her PhD. Arenella enjoyed travelling to conferences across Europe but was eager to actually live abroad. She was also growing tired of the struggle to find work as an academic and wanted to secure a job where she could actually practise her studies.

“I had stayed working in academia because I felt it was my only option. But it’s so unstable and people can’t make a living out of it.” After a few years in Florence, Arenella began applying for positions abroad. “Believe it or not I became bored of Florence. It was nice and easy but I felt like it was time to grow up and leave my comfort zone. I applied for postdocs all over the world; in Australia, Japan, New Zealand and all over Europe.”

Meanwhile, Arenella’s boyfriend decided to move to Dublin to learn English. Even though she had yet to find work, Arenella decided to join him and moved to Ireland in September 2013.

At first Dublin seemed like a wonderful place. Arenella loved living so close to the sea and enjoyed walking around the streets of her new home. “One day we found this place called Moore Street. It reminded me so much of Italy but then again there are many things in Ireland that remind me of Italy. With Moore Street it was the old women screaming that their cherry tomatoes were the best in town. It felt so typically Irish.”

Unfortunately finding work was more difficult than Arenella had imagined. She had hoped to find a science-related job but ended up as an assistant in a large company. “The first month was quite rough. I thought Ireland would be the dream country and it would only take me 10 days to find work. But it was harder than I thought, also because I only had experience in academia. I didn’t have much practical experience.

“I had come here to be with my boyfriend but he wasn’t around too much because he was working night shifts. During the day he was asleep and at night was at work so basically I was on my own all the time and I felt lonely.”

‘I was feeling depressed’

After nine months of working as an assistant, Arenella began researching opportunities back in Italy. “By July the following year, I was feeling depressed because I wanted to work in science and I was worried all my knowledge would become obsolete.” She flew to Rome for a few days after she was offered a trial as a biologist with an IVF company. While in Italy, she received a call from a biomedical research company called Airmid in Dublin.

“I’d sent out so many CVs in Dublin that at first I didn’t even remember who they were, but then I worked backwards and realised this was the job I really wanted. They were looking for a virologist which is the study of viruses.”

Arenella quickly booked a flight back to Dublin for the interview and was preparing to return to Italy to join friends for a holiday when she was offered the job. “I was over the moon, I can’t even explain how happy I was. I had to change my ticket to Italy and they’re very expensive during the summer but it was a great investment.”

I’m used to living in Ireland, what if I don’t like the heat anymore?

Working in an English-speaking lab was challenging at first. “You really grow up when you are abroad and you’re able to answer the phone in another language. I used to sweat so much every time I had to take a phone call. I’d think to myself that if I could do this job in my own language it would be so much easier. I was actually glad I’d had those few months to work in something else so I could adjust to the language.”

Arenella says it took a year before she felt comfortable speaking through English in her workplace. Now, more than three years later, she believes it would now be difficult to work in an Italian lab. “I’ve learned new terms here that I don’t even know in Italian. It’s awkward because maybe Italians are just thinking I’m showing off but it can be hard to speak about my job in Italian because I miss the terminology. I only speak informal Italian with my mum on the phone and with friends. Formal Italian is hard now.”

Arenella would like to move back to Italy at some point in the future but worries she won’t be able to re-adjust to the Italian lifestyle. “I’m used to living in Ireland, what if I don’t like the heat anymore? I like how Irish people are kind to each other. Every time you get off the bus here you say ‘thank you’ to the driver. If I did that in Italy people would ask ‘what’s wrong with you?’”

“I also love that in June the days are endless here. Of course you can’t compare the weather between Ireland and Italy, you don’t even do that comparison. But what I would miss would be the endless summer days in Ireland. Oh, and the Irish butter. Definitely the Irish butter.”