Judy Blume: ‘I buried this story for 40-something years’ 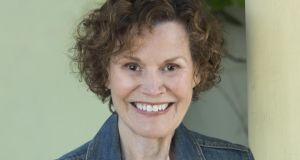 Judy Blume: ‘If I could do this in some way other than writing it down, I would. On other hand, the best things happen when I have a pencil in my hand.’ Photograph: Elena Seibert

In the Unlikely Event, Blume’s gripping new novel and her first for adults in more than 15 years, explores the effect of the triple tragedy on a range of fictional Elizabeth residents, from troubled teenagers to crusading journalists. Its focal point is a teenager who struggles with first love, difficult friendships and family secrets against the terrifying backdrop of the crashes.

It’s all such rich material for a novel that it may seem surprising that Blume, one of the world’s most groundbreaking and beloved writers for young people, hadn’t drawn on this part of her own life before.

“I buried this story for 40-something years,” says Blume on the phone from her home in Florida. “I, who talked about everything – I never talked about it.”

It wasn’t until she heard the author Rachel Kushner speak at a literary festival that something changed. Kushner was talking about a novel inspired by her own mother’s 1950s youth in Cuba.

She told her family about the crashes for the first time. Her daughter, a commercial airline pilot, was particularly shocked. “I really do think that it must have been so traumatic in some way that I buried it,” she says. ‘But once I said to myself ‘I have a story I want to tell and I want to tell it right away’, it was very exciting to do this research and discover everything.”

Beating Philip Roth to the punch

She is still deeply moved by the tragedy – Blume’s voice breaks as she remembers the boys from the orphanage who ran into the burning wreckage to rescue survivors – but she can’t help being glad that a famous author from the nearby Weequahic district didn’t get hold of the story first.

“I’m rather grateful that Philip Roth is about five years older [than I am] and was probably away at school when the crashes happened, or I’m sure he’d have written about them,” says Blume. “And he’d have done it so much better than I possibly could have because he’s a brilliant writer.”

Blume married straight out of college and didn’t start writing seriously until her late 20s. (Her first novel was published in 1969.) Writing, she says, “was life-changing, life-saving. It gave me everything. It completely changed me from a young woman whose frustrations came out in physical illnesses to a young woman who couldn’t wait to get up in the morning to get to the typewriter to get these stories down on paper. It means everything to me.”

But she found writing In the Unlikely Event very hard, and says she can’t imagine writing another novel. “This book took five years,” she says. “And now I’m 77, and it isn’t that I feel any older or feel that I don’t have stories inside me. I do. It’s just that I don’t want to spend another five years like this.”

She still loves creating. “I’m a storyteller. I love to tell stories and make up characters. The words themselves: that’s not my favourite part of it. If I could do this in some way other than writing it down, I would. On other hand, the best things happen when I have a pencil in my hand.”

Those of us who grew up loving Blume’s books will agree. If you were a girl in the 1980s, there is a very good chance you read and loved Judy Blume. For younger readers, there were fun novels such as Superfudge and Otherwise Known as Sheila the Great. And long before young adult fiction became a phenomenon, older kids read the likes of Are You There God? It’s Me, Margaret and, of course, Forever, a sensitive book about a teenage girl’s first sexual experience. Forever was passed around every classroom in the country, usually with the now tame “sex bits” marked. Blume is still hugely popular today, but when I was growing up she was more than just popular: she was all we had, and we loved her.

Blume has always written about the turbulence of adolescence with compassion and without judgment, which is probably why her books have been frequently challenged and banned by conservatives in the US (she’s still actively involved with the National Coalition Against Censorship). It’s also why young people have been writing to her about their problems for decades.

Blume has tried to respond to all letters, some of which came from very troubled young people, and kept up long correspondences with several of them. Kids still write to her, though now mostly by email.

“It’s a different way of communicating than when they sat down with paper and pencil and just poured their hearts out. It was safe. They wanted to tell somebody [and] they didn’t know me; they weren’t going to see me the next day at the breakfast table. It was the act of writing itself, and mailing it, that was almost more important than any response.”

She knows, because they tell her, that she still means a lot to adults who grew up with her books.

“So many boys – even the UPS delivery man – will tell me, ‘Superfudge, that’s the first book I ever read’. That’s sweet. Fame is stupid, but whatever little fame I have, it’s sweet, because it takes people back to their childhoods. When they cry when they meet me, and I cry too, it’s because I’m their childhood. I remind them of their childhood.”

And when Blume says this, her voice full of emotion, I feel on the verge of tears myself. I find myself telling her that she was part of my childhood as well. I tell her that her books were so linked with serious teenage drama in my mind that when, in 1988 aged 13, I tried to write a “teen novel”, I set it in New Jersey because, as far as I was concerned, that was where teenage stories took place – in Judy Blumeland. I tell her how I eventually grew up to write actual novels for young adults.

It’s not, I must admit, the most professional moment of my career. But then, Judy Blume has had readers pouring their hearts out to her for years. Maybe that’s what happens when you’re part of millions of childhoods, from New Jersey to Dublin.

Are You There God? It’s Me, Margaret, the story of a 12-year-old girl trying to figure out how she feels about God, boys, breasts and periods, is perhaps Judy Blume’s most iconic book.

“Margaret brought me all the wonderful young women who still follow me today,” says Blume. But while many of us remember Margaret’s worry about her periods and bust-increasing exercises, “that’s not really what the book was about. If you read it as an adult, you see how much it’s about God and faith and organised religion. I get that a lot from grown-up women: ‘I went back to read it and I was so surprised because I didn’t remember any of that. I only remember puberty and getting your period and growing breasts.’ But, really, it was about my private relationship with God – God as confidante – that I certainly had when I was a kid.”

This exploration of faith recently led to a surprising honour for an author who is often considered controversial. “It’s very funny and lovely. The Catholic Library Association in America just gave me their Regina award for my work. I could only get it in person and it was in Orlando, which is not very far from where I live. [My editor] said, ‘You have to do it because it’s very courageous of them to give you this award.’ And I proudly accepted it.”