Grainne Maguire: ‘Why I decided to live tweet my menstrual cycle to Enda Kenny’ 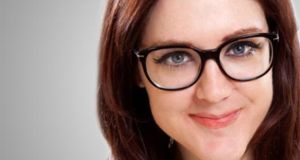 Grainne Maguire: Twink's missing dog got more coverage [on RTÉ]. If there’s a suspicious wheelie bin outside your house Joe Duffy will cover it

As a little girl in Navan watching Zig and Zag I dreamed like most children born in the 1980s of one day maybe meeting the gang myself. I think I even wanted to marry Ray D’arcy for a bit. My little sister wanted to marry Zag. It was all going to work out. I never imagined that when I did eventually chat on the phone to the man himself (Ray not Zag), it wouldn’t be a marriage proposal he’d be reading out, but tweets about my periods I’d been sending the Taoiseach.

And far from being impressed, he’d be delivering them in the style of a disapproving teacher reading out notes I’d been sending in class and wanting to know why I thought they were funny. The wedding was definitely off.

I never expected any of this. As a female Irish comedian I had been trying to find a way to tackle Ireland’s abortion laws for years. Comedy is my life and the stand ups I aspired to be like always used laughter to address the big issues.

I remember reading Jonathan Swifts Modest Proposal at university and being in awe at the way he coldly reduced his anger and frustration at England’s response to the famine to bitterly funny logic. Or reading a column by Frankie Boyle where he calmly savages the hypocrisy of Cameron’s government.

I thought if I, an Irish woman with a microphone don’t talk about my country’s abortion laws, who will? But it’s so hard. I live in London, so ranting about the cruelties of Ireland’s constitution is usually met with uncomfortable bored bafflement and whenever I brought it up at gigs at home, the laughter as well as energy palpably drained from the room.

So one day on the way to meet a friend I just thought, feck it. If the Government thinks my body is their business I’ll just take it at its word. I’ll live tweet my menstrual cycle to Enda Kenny. And in the past week as Ireland’s very own feminist cat bin lady, I have learnt so much.

I realised to my genuine shock how much shame, not just embarrassment so many people in Ireland still feel talking about periods. I was taken aback by the genuine anger I received from men and women for having the audacity to talk about my menstrual cycle in public. Language like “ladylike” “undignified” and “crude” words I’d previously associated with evil priests in Maeve Binchy novels suddenly appeared on my very modern twitter feed.

Listen Up: The Women's Podcast

There was a real sense that there were some things I was simply not allowed talk about. That I was embarrassing myself. That “not nice” topics like this didn’t belong on the radio or TV. That I was letting myself down. It makes sense, if we’re too embarrassed to talk about tampons, we’re hardly going to bring up the ten women every day hopping on a flight to the UK for a termination. And whoever was getting to decide what was and wasn’t polite, definitely wasn’t female.

I can’t complain though, for most of Ireland’s existence, women the State found annoying could have ended up in a Magdalene laundry so I think I got off lightly. I was genuinely shocked by the complete lack of overage it received on RTÉ. Apart from a brief appearance on Ray Darcy, the issue was completely ignored. Obviously, when I started tweeting I wasn’t thinking, well if RTÉ doesn’t cover this I’m calling Michelle Obama. It was only after countless countries covered it, it appeared in most major international newspapers, and I was asked to speak on the BBC World Wide, Radio 4 and BBC World Service that it started to rankle.

Twink's missing dog got more coverage. If there’s a suspicious wheelie bin outside your house Joe Duffy will cover it. It wasn’t my tweets they were ignoring, it was the voices of the thousands of women - licence fee payers, tax payer’s, voters, citizens, whose voices were being ignored. There was also absolutely no support from female politicians or broadcasters. I found it irritating at first, then infuriating, then sinister.

I was also surprised by the defensive attitude. When it was flagged up that this issue was being covered globally the response was that Ireland doesn’t like being told what to do. Well I’m sorry, I know Ireland is everyone’s favourite best little country in the world, but if Amnesty international has to get involved to protect Irish women’s rights here, maybe it’s time to drop the attitude?

To the people who accused me of just being an attention seeking careerist: I question your knowledge of the comedy circuit if you think a female comedian tweeting about her periods is the way to get some of the spotlight. To the people who accuse it of simply not being funny, I take refuge in the knowledge that nothing is objectively, empirically funny. You either personally find it funny or you don’t. Luckily enough people did find it funny.

As for hoping to get Enda to respond by live tweeting him changing the Constitution, I don’t think anyone expected that to happen, but we did manage to capture the world’s attention for a few days, which isn’t too shabby either. And as for complaining that we didn’t mirror the marriage campaign, I don’t think they are comparable at all. With all due respect to the decades of gruelling work LGBTQ Ireland did to drag Ireland’s attitudes to the gay community into modernity and the battle abortion activists face is very difficult.

One ends in a marriage, one ends in a terminated pregnancy. No one is going to throw a street party when the eigth amendment is finally changed. Not all social changes are going to make people feel great about themselves, but that doesn’t mean they aren’t the mature, necessary and humane thing to do.

What I mainly learned however is how much love, solidarity and support there is out there amongst women. From the thousands of women tweeting, to the other female comedians, writers and actors, the female journalists and producers working behind the scenes to get the story out, to the tweets of solidarity from all over the world.

I learned how relieved women were to talk about their periods, their bodies, their lives in their own terms, to each other, not needing to translate it for the always assumed male audience. How fascinating it was to hear the details of other women’s periods. I learnt how f***ing funny Irish women are. How brave and fed up and angry they are.

There’s a saying in recovery that you are only as sick as your secrets. Ireland has a long history of treating women very badly. We are still made feel ashamed, that our stories aren’t relevant, that the issues that affect us aren’t as important. That if we wait quietly, play by the rules, don’t make a show of ourselves, be good women, eventually in a few years, we might see some changes. I don’t want to wait. I don’t want to stay quiet.

Tweeting Enda my periods is the best idea I have ever had. I will probably never ever have another as simple and as good again. And I genuinely believe that it wasn’t even my idea in the first place. I didn’t sweat for hours trying to fine-tune it; it arrived fully formed in my head. I think it’s a message that just needed to get out and I was in the right place at the right time.

I got to be a tiny part of something much bigger and more important than I could ever have imagined and I am incredibly grateful for it. To the women of Ireland I thank you – from the bottom of my uterus to the top of my ovaries. There’s an intimacy that only women get to feel, when you’re in a public toilet and realise to your acute panicking shame you need a tampon and you haven’t got one. Plucking up all your courage, you ask the woman beside you if they have a spare one. You never quite love anyone like you love the stranger when they smile at you kindly and rustle in their bag to pull one out.

How lucky was I to feel like that for an entire week?

‘When you’re beautiful, other women absolutely despise you’
9