Anger ran beside us on the women’s mini marathon

In a country where the cufflinks still twinkle and the bonuses still soar, why are people having to raise funds for basic services this way? 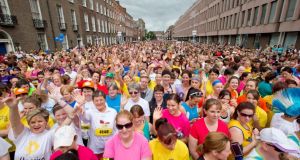 The women’s mini marathon in Dublin: ‘I felt almost overwhelmed by the sheer force of the event.’ Photograph: Morgan Treacy/Inpho

The boy was about nine or 10, a born entrepreneur, standing with confidence at his handsome garden gate on Dublin’s Leeson Street, a plate of home-made flapjacks resting on a small table in front of him.

Beside the dish was a hand-drawn sign offering the 40,000 or more passers-by – who were streaming, panting, past his railings in a steady drove of loose laces and tight Lycra – a chance to purchase his generously cut cookies at €1 a toss.

Minutes from the finishing line, I didn’t stop to sample his wares. Had I done so, I don’t think I could have unlocked my knees to make it under the arch of balloons that were waiting around the next corner, indicating the end of the 31st Flora Women’s Mini Marathon.

The 10km race/jog/walk was established in1983 (a year I spent under the bed, looking for my black eyeliner), and is, apparently, the biggest women-only sporting event in the world.

This year was my first time as a participant. I walked the first five kilometres, then jogged to the finish.

Along the route, the streets were a sea of coloured T-shirts indicating the runners’ chosen charities, cumulatively reading like an epic story of courage and need. Autism; diabetes; cystic fibrosis; leukaemia; the Alzheimer Society of Ireland; the Simon Community; Barnardos; the Jack and Jill Children’s Foundation; the Rape Crisis Centre; the Rainbow Trust; the hospice movement; for adults, for children, for babies.

At each kilometre marker, the T-shirts kept on coming. The level of need seemed endless, insatiable maybe: refuges for women and children experiencing domestic violence; neonatal units to care for the country’s smallest and sickest babies; support for the bereaved, from suicide, from sudden death.

And the babies. Everywhere there were images of sweet, young faces pressed into a rainbow of brightly coloured tops: smiling incubated babies, toddlers with nasal tubes and polka-dot ribbons around their hairless heads. “I’m doing it for Emily,” read one caption. “I’m going the distance for sick kids,” read another.

Cancer charities abounded, offering support for those with the disease, for their families, for their friends, for research. “We won’t stop until cancer does,” read shirt after shirt. “In Memory of our mam,” read one. And more and more images of beloved lost faces.

It was hot and humid. Around me, women ate bananas and sipped from water bottles. They pushed on. One sat down at a bus stop on the Stillorgan dual carriageway in her jogging shoes and lit a fag.A small pride of elegant spray-tanned women from Brown Thomas trotted past with lovely bouncy hair, cutting a dash through Donnybrook for the Irish Kidney Association.

Not all the charities were domestic. One of them was campaigning for “Clean water for Cameroon”, another offered “Support for Ukraine”. From time to time, on the sidelines, drummers drummed and singers belted out high-octane tunes. A little girl waved a carefully coloured-in cardboard flag that read: “Go Fiona!”

Nine kilometres. Almost there. We were all Fionas now.

I dragged my surly knees across the line, an official scribbled on my bib and someone handed me a medal (my first ever – I have the sporting acumen of a deckchair).

Standing at the water station with the other women, among a confetti of used paper cups, I felt almost overwhelmed by the sheer force of the event, by the collective energy, commitment and sense of achievement. But running alongside that positivity was a slow anger. In a country where the cufflinks still twinkle and the bonuses still soar, why, I wondered, are people having to raise funds for services as basic as an incubator or dialysis machine?

Nothing for young men

In the Dart station, my knees having made it upstairs to the platform, I met two women who had completed the marathon for the mental-health charity Aware. One of them had lost her brother to suicide a number of years ago and, just last week, her 27-year-old cousin, too, had taken his own life.

The women had a two-pronged fundraising approach: one went with her sponsorship card to a family wedding, the other to a Communion party. Between them, they raised over €400 for Aware.

“At least this way,” she added, “we feel that we have done something.”

And they did. We all did something. If only something could be enough.

Can I put up a fence and force my neighbour to spend on a survey?
5

The best gourmet getaways in Ireland this summer
7