A play about sex work: ‘I want people to come out of the theatre angry’

An unflinching new play, The Game, will re-enact real-life experiences of Irish sex workers. Director Grace Dyas hopes it will illuminate just how complex the issue is

THEATREclub's new play 'The Game' explores the act of buying sex and the subculture of prostitution. Created by Gemma Collins, Grace Dyas and Lauren Larkin, it runs at the Project from Oct 7-11 during Dublin Theatre Festival.Video: Bryan O'Brien 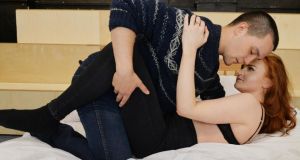 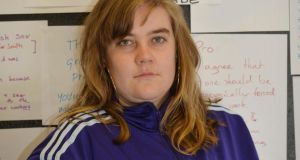 Most theatre rehearsal spaces are a hub of chaos, joviality and creativity, but the atmosphere in director Grace Dyas’s rehearsal space is a little heavier than usual. But then, The Game promises to be anything but your common-or-garden theatre experience.

Part social commentary, part experiment, The Game will enlist the help of five male volunteers for each night of its run. The men in question have no idea what they will be asked to do by the play’s cast members, Lauren Larkin and Gemma Collins. There is no script, but what the volunteers can expect is to re-enact scenarios that have come directly from the experiences of Irish sex workers. Dyas’s objective, she says, is to give the audience pause to consider their own views on sex work in Ireland, for better or worse.

“We’ve collected different stories of experiences from women who have exited prostitution and women currently involved in sex work, and on the night no one has any idea what’s going to happen. What people will be told is that Lauren and Gemma will be leading the night. The men are here to redress misogyny and give a voice to these women’s stories.”

During the mid-afternoon rehearsal, Larkin is re-enacting a sex scene with a male volunteer, one that involves a terse negotiation about a condom. Even in the “safe” space of the rehearsal room, there is a faint sense of unease. In another scene, Collins is recalling a story told to her by a sex worker, underage at the time, who was found walking the street by a man in a van. Suffice to say that The Game will prove to be an unflinching watch.

Chief among Dyas’s objectives is to lay bare just how complex the issue of sex work really is.

“People want this issue to be simple and something that can be wrapped up, but I want people to come out of the theatre angry,” says Dyas. “Certainly, we’ve felt angry working on it. Some of the experiences we’ve heard of are really shadowy, and expose the deepest, darkest parts of our society.”

Dyas has long been an outspoken and impassioned social activist, tackling issues as diverse as drug addiction and the bailout with vim and conviction.

Why is she turning that high-powered acumen towards prostitution? “[The idea] came from the fact that there is a big discussion around what legislation should be in Ireland. There has been the Turn Off the Red Light campaign, which has resulted in Frances Fitzgerald’s Sexual Offences Bill.”

The Bill, which was published on September 23rd, will criminalise the purchase of sexual services in Ireland. In Northern Ireland, a new law came into effect on June 1st criminalising those who pay for sex, using European human rights legislation.

“I was always fascinated by [prostitution] and how to possibly legislate for it, and how law comes into our everyday lives . . . and maybe what parts of our lives the law has nothing to do with,” Dyas says. “It’s certainly something I’m thinking a lot about.”

In facing the issue head-on, she is already bracing herself for a public backlash. “We’re already getting a lot of shit for it,” she smiles. “But even our own journeys have changed. We started off going, ‘Let’s tell these women’s experiences of exiting the industry’, and then  we thought, we can't do without the other perspective, for the audience to get the most out of it...they need to see both sides of it. What about all the women who feel empowered by it? There is a big debate in the show around what kind of legislation there should be, around whether it's a symptom of patriarchy or whether it's empowering women.”

Dyas collaborated with a number of sex workers and prostitutes, about their experiences of prostitution and sex work. What Dyas didn’t bank on was finding out that both factions have very different ideas about sex work. One group believes that it’s an entirely legitimate way to earn a living, and that legislation should not instruct them on what to do with their bodies. The other faction deems prostitution sexual abuse by virtue of the coercive element.

Some sex workers plan to fight the new legislation – on both sides of the Border – all the way to Strasbourg in a bid to keep sex workers safe. They say that the proposed legislation will make working conditions for prostitutes less safe, not more; they will be forced to work in less visible places, for a start.

Other women, however – usually those who have exited – say that any changes to this new legislation will leave more prostitutes much more vulnerable.

“So many women involved in sex work don’t want to be there, and have been coerced on a global scale into sex work,” says Dyas. “But the others are saying, ‘We’re also here; we’re enjoying it.’ The conundrum is that in public discourse, we’re led to believe that everyone in sex work is coerced or trafficked, and they have no agency over it.”

Kate Jeans, a 41-year-old sex worker based in Belfast, reveals that she enjoys working with a broad range of clients. More often than not, she offers the GFE service (girlfriend experience).

“Yesterday was a normal day,” she says. “I met three men; two of which I’d met before. The first one was cuddly, and we even spooned. The second was a young Persian doctor in his 20s. It was very passionate and I would say I was glowing at the end of it. It was such a lot of fun. The third client finds penetration quite difficult because of his age, so we had a cup of tea and a chat. He simply craves the intimacy.

“You tend to look for something you like in each client. Most of them I genuinely like and enjoy their company.”

Jeans is a former professional. Financial difficulties drove her to consider sex work. A few years ago, she left her pensionable job and became a full-time sex worker. “When a friend suggested it to me – it’s way more common an option than you think – I was shocked,” she says. “I was like, ‘How dare you? I’m not that kind of girl’.”

“Oh, it’s massively adversarial,” says Dyas of the ongoing tensions between both sets of women. “Both sides feel that [in campaigning for legislation in different ways] the other is endangering women’s lives.”

Dyas spoke extensively with Rachel Moran, an author and activist who began working as a prostitute aged 14. Unable to access welfare payments, and struggling to survive, she went into sex work.

“Rachel told me that she was economically coerced into prostitution, and coerced by virtue of her class,” says Dyas. “Because of the stigma of what she was doing, she felt as though she wasn’t part of society and wasn’t valued, and had to keep doing what she did.”

Determined to deliver a balanced, comprehensive overview of the industry, Dyas and her team have written quotes from both parties on the wall of the rehearsal space. One side bears quotes from active sex workers: “everything is transactional”; “prostitution doesn’t cause objectification, it’s caused by it”; “you don’t buy a sex worker any more than you buy an actor”.

On the other side of the wall, meanwhile, lie the testimonies from those who have exited sex work: “someone always has more power in every transaction”; “trafficking is economical”.

Dyas and her cast have spent weeks immersed in both sides of the story. What are her personal beliefs now? “Well, I’m baffled by how much discussion there is around protecting men who have sex with women, and their rights to have sex in that way,” she says. “Maybe you have to legislate to protect the most vulnerable people, and maybe the right to sell sex is trumped, ultimately, by the right not to sell sex.”

What all sex workers, active and former, agree on is that there needs to be a shift in societal mindset around sex work.

“The hardest part of the job for me is retreating from family and friends,” says Jeans. “I find it hard to lie, and I wouldn’t want them to find out. I wouldn’t want my son to know: I want him to think of me as his mum, not a sexual being. I would love for the shift in mindset to happen, but I know that, for now, the stigma is too great.”

“I’ve noticed that, when it comes to changes in legislation, it really is a matter of life and death for both sides,” says Dyas. “The exited perspective says, you need to see the harm done to me and the harm done to women every day. The other side is like, you need to see I am enjoying it and just leave me alone and let me get on with it safely. Don't make me hide away.”

The online version of this article has been modified to reinstate unabridged quotes.