Autonomous driverless vehicles due on the market by 2020 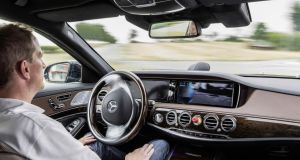 The self-driving Mercedes on the open road, but under the watchful eye of an engineer - just in case...

Mercedes-Benz is determined to be at the forefront of the introduction of autonomous - or driverless - cars and has already committed to have “self-piloting” models on the market by 2020.

To prove this is more than ‘pie-in-the-sky’ dreams, it demonstrated a new S500 test vehicle in action ahead of the Frankfurt motor show, which opened to the public yesterday.

The symbolic demonstration took place on a rather symbolic route for the brand; the 100km route from Mannheim to Pforzheim in Germany. That’s the same route navigated in 1888 by Bertha Benz, the wife of Carl Benz, who developed and patented the first self-propelled motor vehicle in 1886.

The research vehicle ran half the route on country roads and the other half through cities and villages, stopping automatically at traffic lights, coping with roundabouts and stopping at pedestrian crossings and stop signs, explained Thomas Weber, Mercedes-Benz’s head of research and development.It also had to cope with pedestrians, cyclists and the odd roaming dog along the way.

The test car used technology already available on the current E-class saloon and the new S-Class.

The test car was equipped with long-range radars to detect oncoming vehicles and a stereo camera with two lenses set apart to function like human eyes to detect distant objects.

In addition, the S500 research car was fitted with two long-range cameras. A front colour camera behind the windscreen monitored traffic lights while a rear camera monitored objects and landmarks stored in a digital map and was used for positioning, Weber explained.

This all matched with a navigation system, far more precise than available to the public market at present. Weber explained that as GPS is a military developed system, their versions are far more accurate so Mercedes and Nokia developed similar mapping data for the 100km route.

Due to legal requirements an engineer sat behind the wheel during the test, said Thomas Weber, Mercedes-Benz board member for research and development. But he didn’t intervene.

Of course there are significant regulatory and technology hurdles to overcome, but to show the company’s confidence in the technology, Daimler CEO Dieter Zetsche was driven around during the company’s press conference at the Frankfurt auto show in the back seat of the research S500. No one sat in the front seats.