Tesla to turn a profit by 2020 - Detroit auto show

Elon Musk says Tesla might become profitable by 2020 when annual sales reach 500,000 and added that business slowed in China on charging concerns 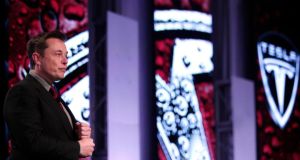 Elon Musk told reporters that he’s “committed to staying at Tesla as long as I’m alive. I might not be the CEO, but I will be with the company forever.”

Elon Musk, the chief executive officer of electric-car maker Tesla, said the company might become profitable by 2020 when annual sales reach 500,000 and added that business slowed in China on charging concerns.

During his first-ever appearance at the Automotive News World Congress, Musk elaborated on the idea that he isn’t chasing profitability in the short term. He said the company is investing in growth and new models and probably won’t make money on a net basis until sales reach 500,000 cars a year after this decade. “I expect we’ll achieve profitability in 2020,” said Musk, who added that Tesla will be making a “few million cars” annually by 2025.

Although such sales volumes are higher than any he’s discussed before, the prospect of not earning a profit until 2020 may frustrate investors, said Maryann Keller, an independent automotive consultant in Stamford, Connecticut. “Before this statement, investors may have speculated that a real profit might come in 2017 or 2018,” she said. “Now they can see they may have to wait for five years.”

China will accelerate building electric vehicle charging facilities, the website Caixin reported. Chinese consumers have been reluctant to switch to EVs because of reliability concerns and a lack of charging infrastructure. Musk said those concerns were unfounded and puzzling. “China is a small percentage of our sales right now,” Musk said, describing the market as “a wild card that seems to change for reasons we don’t understand.”

Tesla had said it would probably deliver 33,000 of its Model S saloons in 2014, down from an earlier forecast of 35,000 because of capacity constraints. By 2020, when the company is making batteries at a massive factory in Nevada and producing its lower-priced Model 3, sales should rise to 500,000 cars and the company will be profitable, Musk said.

Musk told reporters that he’s “committed to staying at Tesla as long as I’m alive. I might not be the CEO, but I will be with the company forever. I’ve committed to stay CEO through volume production of Model 3, then I’ll re- evaluate.”