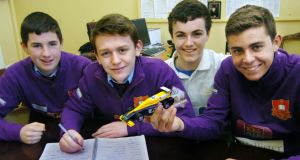 Irish students will be battling it out with the pick of the globe’s up-and-coming motor racing enthusiasts in Singapore in two weeks’ time. The F1 in Schools competition was founded to promote interest in science, technology, engineering and mathematics (Stem) subjects, by encouraging students to use their knowledge to create 1/20th scale Formula One cars.

Those cars are designed, just like the real thing, to a set of rules and regulations and are then raced against rival teams to select the finalists for Singapore.

The cars are designed using computer-aided design (CAD) and computational fluid dynamics (CFD – essentially a computerised wind tunnel) techniques, again just as with real Formula One racers. Powered by compressed air, the cars can reach speeds of up to 110kmh on a purpose-built 20-metre track.

This year is the 15th year of the completion, and more than 25,000 schools worldwide take part, whittling down to a final list of 40 competitors. Three Irish teams will be making the trek to the Pacific Ocean.

Verus Racing from St Attracta’s Community School, Tubbercurry, Co Sligo, has Eoin Leonard as team manager and graphic designer, Gerard Hunt as head of research and engineering and resource manager, and Niall O’Donnell as head of marketing and communications.

Pact-Racing is a collaboration team with Germany from a technology after schools club from HEX CNC, Roscommon, and Gymnasium Grootmoor, Hamburg. The Irish half of the team are Eoin Lyons as team manager and resource manager, Joe Dolan as manufacturing engineer and Sorcha Nic Conmara as graphic designer.

Team IAB Racing’s team manager, Aaron Hannon, said “we are extremely excited and honoured to be representing Ireland on a world stage. Although we have enjoyed great success so far, our main focus for the finals is to perfect our car design, manufacturing and presentation content. We’re in this to win.”

The competition winners will be presented with the Bernie Ecclestone World Champions Trophy – the F1 overlord is a patron of the contest – as well as being brought to the attention of F1’s team managers and technical directors, who will be in Singapore the same weekend, September 13th to 16th , attending to their own little race meeting.