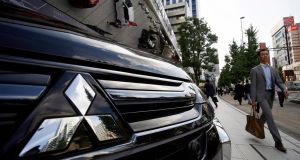 Volkswagen was caught cheating on its diesel emissions by the California Air Review Board. Inexplicably, Mitsubishi has just been caught falsifying official fuel-economy figures on more than 625,000 cars by . . . Nissan.

Last week shares in Mitsubishi Motors plummeted 15 per cent on the Japanese stock exchange – a one-day record for a Japanese carmaker – after the company admitted it manipulated test procedures to claim better mileage numbers on Japanese-market small cars.

Mitsubishi said it manipulated the rolling resistance of the tyres of four cars sold under either Mitsubishi or Nissan badges in Japan to get better numbers and was only caught when Nissan did its own fuel-economy testing.

The company does not yet know if the illegal processes used to test the economy of the small cars were also used to determine the published economy figures of cars exported around the world.

Nissan sold 468,000 Mitsubishi-built DayZ and DayZ Roox models in Japan from 2013 and has suspended sales of the cars pending further technical information from Mitsubishi.

Mitsubishi, which sold more than a million cars worldwide last year, sold 157,000 of the affected eK Wagon and eK Space models in the Japanese market.

Nissan abruptly suggested to Mitsubishi that the data was incorrect and the finger has been pointed at the load placed on the tyres of the four models to lower their rolling resistance.

Mitsubishi’s president, Tetsuro Aikawa, apologised and admitted to the falsification of its CO2 and consumption figures.

A statement from Mitsubishi said: “Taking into account the seriousness of these issues, we will also conduct an investigation into products manufactured for overseas markets.”