Sandycove Lodge has been renovated by its owners, with particularly stunning gardens 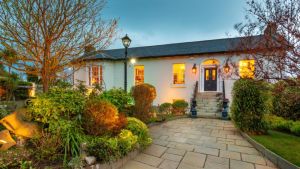 “We haven’t felt locked in here at all,” says Terrie Dunne of Sandycove Lodge, the pretty Victorian villa she shares with husband Frank. “We have woken up to sunshine almost every morning and we are just two minutes from the Forty Foot [bathing steps on the shoreline].

“While I don’t go in for a swim it is a lovely place to take a cup of coffee at around 7am and just watch the sea. Some of our neighbours swim there every morning and I pass them in their togs and dressing gowns popping over for an early morning dip.”

Dunne says she had been admiring the house for five years before they purchased it 17 years ago. “I came with a good friend to have a look, and as I walked up the steps I just knew I would buy it – as it has that lovely calm feeling about it.”

At the time, the 205sq m (2,207sq ft) property, which was part of a portfolio owned by developer Robin Power, had been rented out and was in need of an upgrade, according to Dunne. “It had a galley kitchen and the main livingroom was then laid out as two dark rooms, but my husband Frank is an exceptional builder and we both saw the potential of what it could become.”

It took the couple six months to renovate the house, after which they celebrated their wedding in the garden.

“It started out as a small garden party but by the time the day came we had over 100 guests. We had so many people here we had to put on buses to shuttle people home.”

Dunne, who has been in the property letting business for the past 26 years, is now taking a bit of a backseat.

“I used to work seven days a week and had 200 properties on the books. We merged with O’Dwyer Real Estate Management in Sandyford last May, and now I work three days a week but we are still as busy as ever.”

A career in property came late for Dunne, in comparison to many agents who study and enter the workforce after college.

“I left home after the Inter Cert at the age of 17, and travelled the world on my own for 12 years. I hadn’t a bob, so got a job in London and saved to go to Gibraltar. From there I l lived in Morocco and ended up on a cruise liner which took me from Vancouver and Fiji.”

She returned to Ireland just short of her 30th birthday and studied marketing by day and took a night course in public relations. In tandem, she also became a jewellery buyer for Brown Thomas – and helped to establish a costume jewellery stand in Moscow Duty Free. As property was always her first love, she pursued a career in auctioneering.

The couple are looking to downsize.

“There are four bedrooms and we don’t use many of the rooms. We have really loved living here, but it is time to move on.”

The property is inverted, with four bedrooms – two of which are ensuite – at garden level. The principal bedroom is particularly lovely as it opens to the garden through French doors.

Stone flooring throughout was installed by Miller Brothers in Rathnew, Co Wicklow, and many of the interior pieces came from Minnie Peters’s shop in Dún Laoghaire.

The gardens are just magical and Dunne admits they took a good chunk of the renovation budget. “We spent the guts of €200,000 on them as they needed so much work, but we are delighted with the result.”

The couple engaged Gavin Martin of Earthworks Landscaping, who spent months clearing the 0.2-acre site followed by careful planting and the installation of a raised deck to one side. The company still maintains the gardens on a weekly basis.

For green-fingered enthusiasts the gardens will be one of the major selling points of the property, as they are totally private and have ample car parking for three cars – essential in the summer months when the area is busy with swimmers and beachgoers alike.

The property in turnkey condition, with pristine gardens, and is now on the market through Sherry FitzGerald seeking €1.95 million.