Planning permission sought for development at Kemnay, a modest single-storey residence on 0.74 acres 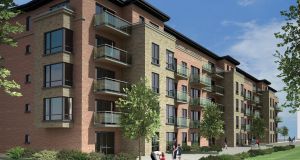 Residents of Hazelbrook apartments on the Upper Kilmacud Road have objected to Larry Keegan’s Stillorgan Gate, which is now under construction

South Dublin’s Upper Kilmacud Road has seen a flurry of activity in recent times, with major new developments proposed and under construction.

Davy is the latest developer on the scene, having purchased Kemnay, a modest single-storey residence on 0.74 acres adjacent to Keegan’s scheme. It now seeks planning permission for a residential development.

The house appeared in the property price register as having sold for just €700,000 in 2014, after it was offered for sale through Ganly Walters. Davy’s scheme will effectively be an extension of Stillorgan Gate, which is already under construction, and both parties used Terenure-based PCOT Architects to design their properties.

Keegan originally faced opposition and planning appeals from residents of neighbouring Hazelbrook apartments. As Davy’s proposed properties are even closer, this plan may also be delayed by similar action.