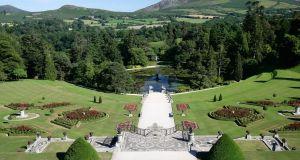 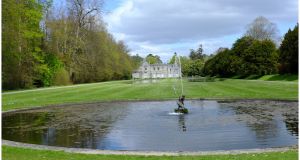 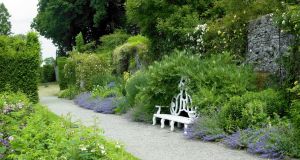 Often, when we think of formal gardens in country house estates, we have a picture in our heads of the terraced Italianate gardens in Powerscourt estate in Co Wicklow or maybe the expansive parklands of Belvedere House in Co Westmeath. However, we rarely consider how these gardens emerged from the landscape or when the tradition – or fashion – for formal gardens or managed landscapes began.

Landscape historian and garden consultant Vandra Costello has a particular passion for the earliest of country house gardens and she has travelled the length and breadth of this island and beyond to research gardens for her book, Irish Demesne Landscapes 1660-1740 (Four Courts Press).

On her travels, she has discovered the remnants of 17th-century gardens in places like Stradbally Hall, Co Laois, Castlemartyr, Co Cork, and Birr Castle, Co Offaly. Suburban tree-lined roads such as Foster’s Avenue or Mount Merrion in south Dublin are also reminders of how entire suburbs were once part of large country house estates that have largely been forgotten.

“The ancient Irish families and the Normans began gardening but their efforts were halted by rebellions and the Cromwellian settlements. It was only post-1660 that the Grand Siècle gardens came to prominence and these were owned by the ancient Irish aristocracy, the Anglo-Normans, the New English and, post-1689, Huguenot families from France,” explains Costello.

Trees and shrubs became important in these new landscapes. “Trees and shrubs were used in gardens for mazes, groves, labyrinths, topiary and radiating avenues. For example, Dromoland Castle was developed with a formal garden with parterres [symmetrically planted beds, often with hedging and gravel pathways], statues and water features, with parklands beyond,” says Costello. The formal gardens at the Royal Hospital Kilmainham also date to this period.

For her book – now out in paperback, Costello mined historic gardening manuals and Irish Country House records and pored over Ordnance Survey maps to find out how and why the gardens developed. The parterres, for example, grew out of the medieval tradition of the knot gardens [intricately designed enclosed herb gardens], while cabinets [hedged enclosures at the end of a walk] gave walkers a sense of privacy.

“Gardens were great places for privacy and mischief. You have to remember that people were always supervised in the house,” say Costello.

Practicality as well as aesthetics was important in the gardens of the 17th and 18th centuries, according to Costello. “The walled gardens were built of brick, which retained the heat for the fruit trees, while the vegetables were planted ornately, but grown for use in the house. It was all about being sustainable and well managed, so that the demesne could pay for itself,” she explains.

And, of course, deer were also hunted for consumption. Medieval deer parks had dense natural woodlands, but the deer parks in the 17th century were designed to make the chase easier and to encourage breeding. “Phoenix Park was one of the great royal deer parks, which were used for hunting and sport,” says Costello.

Ponds and canals were features of these gardens as much for their decorative purposes as for places to stock fish for the occupants of the house to eat. The double canals or long ponds close to Killruddery House in Bray, Co Wicklow, are a particularly fine examples of this feature. In fact, Killruddery Gardens are deemed one of the finest examples of 17th-century gardens that remain reasonably intact on this island.

Technological advances in engineering, such as hydraulics, were used to good effect. Rivers were channelled and controlled, with weirs and dams used to fill basins and turn waterwheels and supply water to fountains.

Snow and ice were stored in straw-thatched ice houses or snow pits and used throughout the year to cool and preserve food.

Other more ornate features were also part of gardens of this period. “It was the time when obelisks, statues, temples, shell houses and grottos were first built in gardens,” says Costello. The Grand Tour to France and Italy had become an established part of the education of young landowners, who then often wanted to display their sophistication by bringing back classical pieces from their travels. Similarly, conservatories, orangeries and hothouses became necessary to grow the plants brought back from the east and west Indies.

Becoming a professional gardener was deemed quite a good career option for what Costello describes as “a working man of small means”. As well as his salary, he often got a decent house to live in and as much fresh produce as he needed.

According to Costello, very few of these geometrical wooded gardens remain today. “Many of the late 17th-century and early 18th-century gardens were incorporated, in the late 18th century, into new supposedly “naturalistic, but no less contrived landscape parks,” says Costello.

These gardens – Marlay Park in Rathfarnham, Dublin for example – were developed with large areas of green, undulating ground, as opposed to densely planted flat landscapes.

“Traces of the older 17th century gardens can still be seen in places like Dromoland Castle in Co Limerick and Luttrellstown Castle in Dublin, but in many places, demesnes and parklands were split by motorways or bought by developers,” she says.

At a recent lecture to Irish Georgian Society members, Costello asked people to contact her if they discovered any documents or drawings relating to gardens from this period.

“I’m particularly interested in drawings in private collections, which could enhance our understanding of these Irish landscapes,” she says.