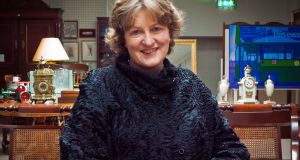 Martina Noonan: “I wrote a thesis on 18th century Irish silver which is my first love.” 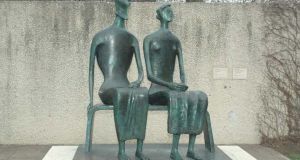 Martina Noonan is co-owner with husband Bryan Greene of Thomas P Adams & Co – known as Adams Blackrock – an art and antiques auctioneering business in Blackrock, south Co Dublin. The business was started in the 1940s by Thomas Adams who originally opened an auction saleroom in Shankill, Co Wicklow but moved to Main Street, Blackrock in 1947. They hold approximately six to eight Fine Art & Interiors Auctions a year. Noonan is a general valuer – and no two days are the same – from carrying out valuations for probate to dealing with clients looking for verbal valuations on items in the saleroom.

What’s your background? I’m originally from Navan, Co Meath where my father was a solicitor andI am one of six girls. I went to boarding school in Our Lady’s, Rathnew in Co Wicklow. When my family moved to Dublin [Ailesbury Rd] in the 1970s I went to the Teresian School in Stillorgan. I was influenced as a child by my parents who were regular auction-goers and I have a distinct memory of the intrigue I felt, aged about nine, attending a country house sale with my mother in Lismullin House, in Co Meath. After leaving school, I got my first job in an antiques shop run by Jane Williams – a well-known antiques dealer of the time – on the corner of Molesworth St and Kildare St. The shop is long gone, the premises was taken over by Buswells and absorbed into the hotel.

How did you get into the business and why? I applied to do a fine arts course at Christie’s in London – the first one they ran. I absolutely loved my year there and met some very interesting people – there was an incredible mix. London was amazing and it was great to have access to places like the Victoria & Albert Museum and the Courtauld Institute of Art. We also had access to some private collections such as Earl Spencer’s at Althorp in Northamptonshire – the childhood home of Lady Diana who became Princess of Wales.

I wrote a thesis on 18th century Irish silver which is my first love. After the course in London I came back to Dublin and worked in Louis Wine – a renowned family-run antiques business in Grafton Street which has now closed. I was there for three years and specialised in silver.

After that I worked in Dublin for the late Knight of Glin who was Christie’s representative in Ireland. It was a great experience and I remember especially the auction of some contents of Birr Castle in Co Offaly and having dinner with the Earl and Countess of Rosse. I married Bryan Greene, who had also worked for Christie’s, in 1985. In 1986, we bought Thomas P Adams & Co from Paddy Dunfoy who had taken it over from the founder.

Career highlight? A charity auction we ran in November 2011 at Adams Blackrock called “Art for Alexandra” which raised €62,000 for the Russian artist Alexendra Trotsenko, who lives in Ireland, and who had been the victim of a savage assault which resulted in her losing some fingers. Her plight was brought to public attention by Joe Duffy on Liveline and artists from all over Ireland contributed paintings and sculptures to be sold. The money raised at the auction – added to by over € 20,000 raised by Liveline listeners – went towards paying Alexandra’s medical bills.

What’s your advice to collectors/ investors? Buy the best you can afford and only what you like. Georgian furniture – made in Ireland and England in the 18th century – is undervalued because it has gone somewhat out of fashion. But I think it’s incredibly good value – such good quality and the timber is so beautiful. Just look at the grain of an 18th century piece of Cuban mahogany furniture. Silver is also very good value at the moment, especially 18th century silver which is very undervalued. For someone interested in building a collection of silver I’d recommend buying, say, a pair of 18th century candlesticks by a good Dublin silversmith which might cost up to €2,000 but would make a good, long-term investment. In the art market, I believe that paintings by Sean Scully will make good long-term investments – as would a very large painting by Jack B Yeats – say, 2ft by 3ft as opposed to his smaller pictures – and I also think that Louis le Brocquy’s paintings are currently undervalued. What do you personally collect and why? I’m not a major collector but I love art and occasionally buy paintings by Irish and French artists.

What would you buy if money were no object? A Cartier ‘Tutti Frutti’ bracelet. I simply love this period of design by Cartier. These bracelets were made by Cartier in the early 20th century in a unique style with coloured stones. One that had belonged to the cosmetics heiress Evelyn Lauder sold at Sotheby’s, New York in 2014 for over $2.1 million. What is your favourite work of Art and why? Henry Moore’s King & Queen, which I saw on public display in Glenkiln Sculpture Park near Dumfries & Galloway in Scotland some time ago.

I would describe it as primitive, graceful and regal all at the same time. So composed. It was beautifully positioned overlooking the Glenkiln reservoir and miles of landscape towards England.

I like the story told by Henry Moore as to how it came about which was as much by accident as anything else. Moore remained completely understated despite his reputation as one of the 20th century’s greatest sculptors.