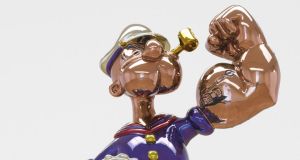 More than $1 billion was spent at Christie’s and Sotheby’s in New York this week in a series of record-breaking auctions. Among the highlights was a triptych painting by Dublin-born artist Francis Bacon titled Three Studies for a Portrait of John Edwards which sold at Christie’s for $80.8 million (€59 million) to an Asian buyer. Christie’s said they had “established 26 new world auction records, selling two works for more than $80 million, four over
$50 million, 12 over $20 million and
19 over $10 million ”.

At Sotheby’s, a sculpture of cartoon figure Popeye was sold to Las Vegas casino operator Steve Wynn for $28.1 million. How to explain these extraordinary prices? “The current commentary on the art market avoids what is truly driving it. It is the work of art itself,” according to Steven Murphy, CEO of Christie’s. In a statement he said: “It is an extraordinary cultural moment. When works of art regularly sell for these figures, with a queue of bidders lined up from across the globe to try to secure the piece, and many thousands more viewing the art online, it is not the promise of a financial return that is creating the urgency to own the work of art. More people than ever before want to connect with art; and the growth in this audience globally makes the few, individual, true masterpieces available more valuable than ever before.”