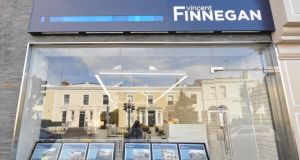 Estate agent Vincent Finnegan has opened a new office in Dún Laoghaire, within a stone’s throw of two thriving agencies in the area – Sherry FitzGeral and DNG.

Finnegan, who started his first business in Dundrum in 2003 and added a commercial arm in 2008, spent the recession years quietly expanding his business, eventually buying his new premises in Dún Laoghaire from Nama at a knockdown price.

The 4,500 sq ft unit at 7/8 Anglesea Buildings had been owned by Richard Murphy of Extravision fame, who paid more than €2 .5 million for it in the boom times. Finnegan picked it up for about €450,000.

The new premises opened last week and has five staff, with plenty of space to expand. Sherry FitzGerald is a couple of doors away in what is one of its more profitable outposts.

DNG is a little further on, across the road. Finnegan had been claiming his share of high-end southside homes in recent years notching up significant sales from Blackrock to Killiney and the new premises, which he describes as “London boutique style” is likely to be busy from the get-go.

It also fills another gap in the Dún Laoghaire streetscape which is slowly coming to life, having been badly hit by recession. The word is that House, the Leeson Street eaterie and nightclub is taking over Walters pub, while ice cream makers Scrum Diddly are set to open a new shop opposite the People’s Park.

n Meanwhile in Sandyford, Damien Baxter and his wife Marie have opened a new branch of Baxters Auctioneers, a business that dates back to the 1970s when Damien’s father, the late Kevin Baxter, set up shop in Blanchardstown.

The pair have racked up almost 40 years in the property business between them, both of them working at different stages for Baxters and, more recently, for Sherry FitzGerald in Dundrum and Bray.

All the latest news and features on homes, interiors, gardens antiques and more