Edible schoolyards, and other ways to make our cities nicer 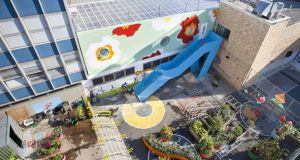 The housing crisis, congested roads, pollution, a capital city that sucks services from the rest of the country while the regions scramble to stand up to it: it can be hard to stay optimistic about progress. But what about introducing edible schoolyards, nature cities, or a “locavore fantasia”?

These are some of the groundbreaking projects from Dan Wood and Amale Andraos, who run WORKac, a New York-based architectural practice. In Dublin for the Irish Architecture Foundation’s always engaging New Now Next series of talks, Wood and Andraos bring a refreshing mixture of pragmatism and imagination to some of our more pressing urban problems.

The first thing is make the important questions visible through architecture

This year the New Now Next talks focus on cities, infrastructure, communities and housing, “the essential issues of our time”, as the foundation’s director, Nathalie Weadick, puts it. So, given that the agenda for the series is to inspire, astonish and motivate, what do Wood and Andraos think architecture can do to help? “The first thing is make the important questions visible through architecture,” Andraos says. “The questions of climate change, the relationship to the environment, where food comes from – is it possible to grow it and live where you grow it? – in an urban context. Architecture can make all that more manifest.”

With this in mind, one of their projects, the Edible Schoolyard, transforms half an acre of parking space at a Brooklyn school into an organic garden and greenhouse for year-round growing, together with a kitchen classroom where the students can learn to cook, and eat the fruits of their labours. The original Edible Schoolyard Project was started by the chef and activist Alice Waters in Berkeley, California; Wood and Andraos have brought it to sites in Brooklyn and Harlem.

Locavore Fantasia, a project commissioned by New York magazine, takes this a step further. A terraced ramp supported by funky sculptural columns houses a vertical farm, complete with housing for the farmers, plus public spaces, a farmers’ market and even a small golf course. It’s a glorious farm-as-skyscraper experiment that, while definitely a fantasy, could still inspire smaller projects or new ways of thinking about how we design and use the spaces in our cities. Why shouldn’t green space be stacked, and why shouldn’t the cycle of food and growth be visible and accessible at the heart of where most people live?

That balance of fantasy and pragmatism is at the core of WORKac’s practice. The firm was founded in 2003, when Wood and Andraos, who like so many successful architecture duos are also a couple outside working hours, decided to leave Rem Koolhaas’s OMA and set up on their own. Embarking on what they have described as a “five-year plan to say yes to everything”, they have developed an impressive portfolio that ranges from secret apartments on the top of listed New York buildings to a self-sufficient “cottage” in Arizona and an enormous conference centre in Libreville, in Gabon. Underpinning everything are the questions of how we can bring rural and urban closer together and how we can live better, happier, more social lives through architecture.

In 2008 their Public Farm 1 project won the Museum of Modern Art’s prestigious Young Architects programme and was installed at PS1, the MoMa-affiliated arts space in Long Island City. “That project evolved to become the Edible Schoolyard,” Wood says. Andraos adds, “Art institutions are critical in opening up new ideas about how we can live with one another, get to know one another. It’s a very important time in art and culture.”

With that, talk inevitably turns to New York and the changes in Donald Trump’s US. “It’s horrible,” says Andraos, who was born in Beirut, in Lebanon, and lived in Saudi Arabia, France, Canada and the Netherlands before moving to New York, in 2002. “But the hope is that there’s an awakening, and there is a very engaged new generation who are realising that the things we had taken for granted need fighting for.”

I wonder how much architecture inflects our interactions in the physical world. While in Dublin, Andraos and Wood have been staying at Number 31 (number31.ie), on Leeson Close, one of Dublin’s more intriguing hotels. Housed in a Georgian building, and its mews, reimagined in the late 1950s by Sam Stephenson, architect of the Central Bank of Ireland, it’s a heady mix of graceful period style and a James Bond villain’s lair. The couple and their two children have been staying in the older part. Do they feel differently in the different spaces? “Maybe it proves that midcentury modern is good for breakfast, while Georgian is good for sleeping,” Wood says.

What architecture can do, he suggests, is to rethink urban life and offer “experiences that jolt people out of their day-to-day life.” Andraos adds, “You want to create an invitation to experience life differently.”

The couple are also clear about the limitations of architecture. Citing “failures” of the past, such as the Pruitt-Igoe housing complex, built in the 1950s in St Louis, Missouri, and Robin Hood Gardens, built in London in the 1970s. “The problems were to do with racism, the economy, a lack of services. Then you find out,” he says, referring to the 2011 documentary The Pruitt-Igoe Myth, “some people loved living there.”

“The idea is not to keep throwing out history but to learn from it – to learn why some things are successful and why others fail,” Andraos says. “We also have to start thinking about preservation in a different way,” Wood continues. “We have to preserve old buildings, because they connect us to history, but there are ways of preserving them that combine old and new. The past and present are continuous.”

We move on to Dublin’s housing problems, and Andraos is clear that the idea that housing can be provided only by market forces is utterly flawed. Wood picks up on the question, exploring what is being done in US cities such as Phoenix, Dallas and Philadelphia, all of which are realising the value of supporting culture in their rebirth. “Portland tried to recruit us to set up there,” he says. I can see why: they’re engaging, active and inspired. “We get excited about everything,” Andraos says, in a gentle understatement. “Rethinking the ordinary and everyday life.” Just what we need.

What’s New, Now and Next?

Supported by Arup, the New Now Next talks continue on May 11th with the professor of urban design Peter Bishop, who was the first director of Design for London, the city mayor’s architecture and design studio. Then, on September 14th, the architect, urban designer and landscape architect Winy Maas will be in Dublin. Rounding off the series, on November 1st, is Merritt Bucholz, founding professor at the University of Limerick’s school of architecture and partner in Bucholz McEvoy Architects. Talks are free with tickets from architecturefoundation.ie.