Davida Forde spent weeks in a wheelchair, exhausted and in extreme pain – all from a tick bite 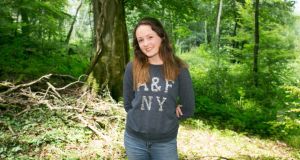 Davida Forde from Co Limerick: Today Davida is out of her wheelchair, can walk unaided and has started to get her life back, after being diagnosed with Lyme disease. Photograph: Brian Gavin

She may be known as a rock chick with attitude but singer Avril Lavigne has been keeping a very low profile of late. The Canadian singer was diagnosed with Lyme disease last summer after being bitten by a tick and spent five months in bed, unable to move or even speak.

Now on the road to recovery, the 30-year-old wants to make people aware of the danger surrounding this often misdiagnosed condition.

“I had no idea a bug bite could do this,” she said in an interview with People magazine. “I was bedridden for five months. I felt like I couldn’t breathe, I couldn’t talk and I couldn’t move. I thought I was dying; I had complete weakness and fatigue. One night I tried to brush my teeth on the tour bus and couldn’t even stand.

“I went from doctor to doctor for about eight months, which was unacceptable and frustrating. I finally found somebody who had the knowledge and the expertise of treating it.”

Kathy Forde from Limerick can sympathise with Lavigne as her daughter, Davida, was diagnosed with Lyme disease last spring after first becoming ill in 2012.

“Before September 2013, I had never heard of Lyme disease but my daughter, Davida, developed a pain in her left hip and tailbone in February 2012,” she recalls.

“By that evening she was sweating profusely and was extremely tired. The following day she was admitted to hospital and that was the start of a lengthy investigation. She went from being a 12-year-old who was full of life to spending weeks in a wheelchair, sleeping for hours on end but waking up exhausted and was constantly in extreme pain – it was a terrible time.”

After various tests and admissions, Davida met a doctor in September 2013, who believed she had Lyme disease. This was the first time her parents had ever heard of it and was the start of a long process of recovery.

“A consultant told us he was 99 per cent sure Davida had Lyme disease and as we had never heard of it, we started to educate ourselves about it and got in touch with Tick Talk Ireland who were a great support,” says the mother of three.

“We sent blood samples to a clinic in Germany which came back positive for Lyme. We attended an appointment in February 2014 and while we were there, met an American doctor who was visiting from his clinic in New York. He asked if he could sit in on our consultation where we were given a diet plan and some supplements to help boost Davida’s immunity as she was too sick at the time to start a course of antibiotics.

“But by the time she was ready for treatment, the clinic informed us it was no longer treating children under 16 so we would have to wait until then. She wasn’t getting any better so we contacted the doctor in New York and last July brought her over to his clinic where she started six weeks of IV treatment and a course of oral antibiotics.”

Today Davida is out of her wheelchair, can walk unaided and has started to get her life back. But her mother says there isn’t enough information or treatment available in Ireland and people should be really vigilant when visiting the countryside and should investigate symptoms as soon as they become apparent.

“Lyme disease is the most debilitating disease I have ever come across and there is not enough awareness of it in Ireland or the effects on the patient and their family,” she says.

“We were forced outside the country to get sufficient treatment [which we paid for ourselves] so that our now-teenager could have a normal life. Others may not be in the position to do that so we need our Government to fight for sufficient testing and treatment for them.”

Dr Paul McKeown is a specialist in Public Health Medicine with the Health Protection Surveillance Centre (HPSC). He says the condition can be difficult to diagnose.

“Diagnosis of Lyme disease can be challenging, and testing is currently undertaken in most of the larger hospitals in Ireland, with confirmatory testing available from the UK’s Lyme diagnostic service in HPA Porton Down,” he says.

“In general, it is accepted clinical practice in Ireland, the UK, Europe and North America that laboratory confirmation is unnecessary for a confidently made, clinical diagnosis of erythema migrans [a rash associated with Lyme]. For later presentation of the disease, a two-tier system is necessary to ensure that false-positive rates are kept to a minimum.

“Serological testing for antibodies to Borrelia burgdorferi [the spiral-shaped bacterium associated with the condition] is the mainstay of diagnostic testing. There have been significant improvements in antibody testing in recent years, making diagnosis more certain than in the past.”

Ticks tend to go for sensitive areas of skin and some people who have been bitten have no symptoms of Lyme disease while others may not develop any untoward signs until days afterwards.

“The mouth parts of ticks have evolved to bite only through the thinnest of skin so are most likely to be found in the armpits and groin areas, especially in adults, and in the hair and scalp of children,” McKeown says.

“Serosurveys [in which groups of people are tested for Lyme disease] indicate that many infected people have no symptoms at all,” he says. “The most common noticeable evidence of infection is erythema migrans which is seen in about three-quarters of patients.

“This red, raised skin rash [often called a bulls-eye rash] develops between three days and a month after a tick bite and spreads outwards from the initial bite site.

“This rash can last up to a month and be several inches in diameter but not everyone who develops the disease will get this. Infected individuals can also complain of influenza-like symptoms such as headache, sore throat, neck stiffness, fever, muscle aches and general fatigue. Occasionally, there may be more serious symptoms involving the nervous system, joints, the heart or other tissues.”

The health specialist advises people to make themselves aware of the dangers and symptoms of the disease.

“The ticks that carry Lyme disease are prevalent in Ireland and most of the population is rural,” says McKeown.

“This places them and their pets at risk of being bitten by infected ticks. Dogs can carry ticks home which can go on to bite family members so checking for ticks after a trip to the countryside is very important.”

The Health Protection Surveillance Centre has an array of educational and preventive material to ensure that Lyme disease and its prevention is brought to as wide an audience as possible and this can be found at iti.ms/1MjYvp9

A moderate ‘flu-like’ illness. Multiple areas of erythema migrans (usually smaller than the initial lesion). Facial palsy (paralysis of the facial nerve with drooping of one side of the face) and other cranial nerve lesions. Aseptic (‘viral-type’) meningitis. Mild encephalitis. Arthritis with effusion (joint swelling). Inflammation of heart muscle.

“The most frequently seen presentation at this stage is Lyme arthritis, usually affecting the knee and an extensive skin rash,” he says. “Also chronic Lyme meningoencephalitis [inflammation of the meninges – the tissue that envelops and protects the brain – and of brain tissue], which is rare.”

Lyme disease (also known as Lyme borreliosis – LB) is an infection caused by a spiral-shaped bacterium – Borrelia burgdorferi – transmitted to humans by bites from ticks infected with the bacteria.

The infection is generally mild affecting only the skin, but can occasionally be more severe and highly debilitating.

They are hosted by a wide range of mammals including deer, sheep and cows; their tiny size (less than 2mm unfed) means they can remain undetected for long periods.

They are commonly found in woodland, moorland, grassy areas and damp undergrowth.

They feed by biting, attaching to the skin and sucking blood from animals. If ticks feed on an infected animal, they will also become infected and can pass on the bacteria to people and domestic animals.

Dog owners, ramblers, campers and those who work in such areas, especially if they come into contact with large animals, are at greatest risk of being bitten by ticks and of going on to develop disease.

In Europe, Lyme borreliosis is most prevalent in Central and Eastern Europe, but can be found in virtually all European countries, including Ireland.