The artist who damaged her brain 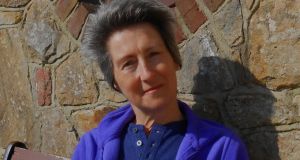 Lynda Christian in Killaloe: ‘I was able to get treatment that worked for me, and a good rest was certainly a vital ingredient in my recovery.’ 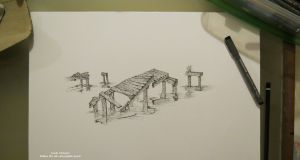 Drawing by artist Lynda Christian. Her work has been displayed at the National Botanic Gardens in Dublin and currently at the Kildare Gallery, Carton House Hotel, Maynooth.

The human brain has evolved over millions of years to create a finely honed sense of our own individuality.

If it is injured, however, personality changes may result which can be life-altering.

At least, this is what Lynda Christian discovered, following a lost decade after suffering a single concussive episode.

The artist, who lives in picturesque Killaloe in Co Clare, along the banks of the River Shannon, recounted the events of December 2003, which impacted her so profoundly.

“Having recently separated, I had just started a new job, and was feeling very tired. Nonetheless, I decided to decorate the Christmas tree before my son came home from school,” she explained.

“I placed a two-piece ladder up to the opening of the attic with one foot on the top rung, and both knees on either side of the attic opening. Then, I began pulling at the heavy box of decorations that was stuck between the wooden joists.

“Suddenly, I heard a metal chink, which I later assumed was the metal lever holding the two sections of the ladder together. What followed was a remarkably serene feeling of falling through empty space.”

Lynda still has vivid memories of that out of body experience, and of being instructed by a disembodied voice to rejoin her body. Next, she remembers trying to sit upright on the floor, and of looking-up at the attic space, towering some 12 feet above her head.

Her first instinct was not to call an ambulance, however, but rather to crawl towards the kitchen, in order to make a cup of tea. That was before setting off on a 16 mile journey to collect her son from school, which amounted to a round trip of some 32 miles for Lynda that day.

“I suppose you could credit this attitude to my upbringing,” she says. “We were a ‘get on with it’ sort of family. However, in retrospect this approach to my injury did not do me any favours at all.

“With concussion it simply does not pay to be stoical. You have to take a rest, and take it easy; however, I felt that I had no choice but to continue.”

Following her fall, Lynda felt a persistent searing pain on the left side of her skull. Indeed, increasingly this made it impossible for her to sleep, while at work she found it difficult to focus.

“I dreaded even combing my hair because of the discomfort involved,” she said. “I was, however, good at covering up at work, by trying twice as hard on the task at hand.

“Forced to seek medical attention, I was amazed to be told by one consultant that I had merely fainted.”

“Then, in January 2004, I had what I believed was a mini-stroke. I also began to experience vision problems, seeing ‘chevrons’ in white and black patterns, and wasn’t able to speak properly,” she added.

“Over the years that followed I had several tests done involving Magnetic Resonance Imaging (MRI) scans, but these were given the all-clear.

“Indeed, another doctor, whom I consulted, told me that my symptoms matched no known condition.”

Later a neurologist told Lynda that she had restless leg syndrome, a first cousin of Parkinson’s disease, and prescribed a daily course of tablets to boost levels of the neurotransmitter, Dopamine, in her brain.

However, she found that this treatment was making her condition even worse. She complained about the side-effects of her medication but incredibly the dosage was doubled.

With her health worsening, Lynda abandoned taking the medication altogether, resulting in a further two weeks of hell as she went ‘cold-turkey’ to stabilise herself.

“Then, around June 2012, I was assigned a new neurologist,” she recalls.

“He decided to review all of my scans to date, and immediately seized upon something that I had said about ‘giggling’.

“The final diagnosis came about as a result of reviewing these old MRI scans, where a ‘milky white smudge’ was discovered in the left temporal lobe of my brain.”

One of four lobes in the area of the brain known as the cerebral cortex, together with the adjoining hippocampus and amygdalae, they assist in long-term memory formation and facial recognition. In particular, the temporal lobes store memories of people by recalling their voice, dress sense and cues.

The injury, suffered in her fall back in 2003, had resulted in so-called Gelastic (from the Greek word ‘Gelos’ meaning ‘laughter’) seizures. It is, ironically, a condition that is, even more difficult to diagnose than concussion.

These seizures result from sudden bursts of energy in the brain leading to a form of anguished laughing or crying. The ‘fits’ normally result from temporal or frontal lobe lesions, and benign tumours, called Hypothalamic Hamartomas (HH’s).

A seizure usually lasts for less than a minute but the sufferer may be affected by day or by night, with an accompanying terror of losing control.

However, there was another unexpected side-effect which materialised while Lynda was on sick leave, namely an artistic reawakening.

Sufferers of frontotemporal dementia, for example, have been known to produce amazing artistic work, as the disease progressively attacks their Frontal and Temporal Lobes.

The brain’s centre for artistic excellence, the right parietal lobe, is normally spared, becoming hyper-functional as a result.

A dyslexic, Lynda studied art for a time at the National College of Art and Design (NCAD), in Dublin, before starting work.

Today, she has begun working again with local artist, Lynn Kenny, and specialises in the use of recycled metal in her sculptures. Indeed, her work was recently displayed at the National Botanic Gardens in Dublin.

She concluded: “After two years I feel a lot better. I was prescribed a neurological painkiller which I no longer need to take, and any episodes of fits have, thankfully, virtually disappeared.

“The fact that someone believed me about the effects of that fall was a great relief. Finally, I was able to get treatment that worked for me, and a good rest was certainly a vital ingredient in my recovery. ‘A change is as good as a rest’ as they say!”

For more information about the artist Lynda Christian please see the website: lyndachristian.com

Despite medical advances, our understanding of it remains somewhat obscured.

Concussion may be one of the commonest types of head injury but it is also difficult to diagnose.

The brain can be described as a type of soft jelly, suspended in cerebrospinal fluid (CSF), inside a hard protective box, called the skull.

However, a sharp movement can deform this jelly disturbing connections that have evolved over the course of our lifetime.

Indeed, the ability of the brain to absorb glucose, as an energy source, may be reduced for up to four weeks after a concussion.

Furthermore, neurotransmitters, such as glutamate, that assist our brain cells (neurons) to fire, may be produced excessively, leading to cognitive and emotional problems.

Cerebral blood flow may, also, be reduced contributing to an energy crisis and a resulting lack of oxygen (anoxia) that can cause neurons to die.

Although most concussions resolve themselves inside a week to ten days, the brain may react badly to further injuries, leading to ‘second-impact syndrome’, which can be fatal.