The sex survey: How you answered our big questions

More than 12,000 readers participated in The Irish Times sex survey, with some surprising results 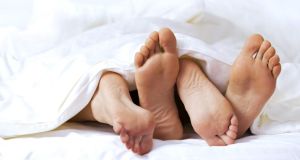 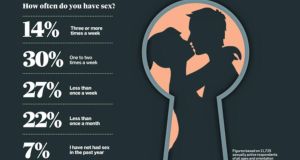 Am I normal? That’s the question that the sex survey we carried out recently in The Irish Times is meant to answer.

“Sex surveys can be a help and comfort to people in understanding and working through their sexual issues,” says Margaret Dunne, a psychotherapist and psychosexual counsellor. As David Spiegelhalter asks in his recent book, Sex by Numbers: “Am I having too much? Not enough? Are my experiences different? Or, at least, are they really different?”

Irish people tend not to talk about sex, so we don’t have a clear sense of what is going on out there. In our survey, which more than 12,000 people responded to online earlier this month, just 7 per cent of participants (excluding virgins) hadn’t had sex in the past year, while 44 per cent of all sexually active participants do it at least once a week; this includes 14 per cent who have sex three or more times a week. Due to the fact that people who completed the survey are more likely to be interested in sex, this could represent “the upper levels” of sexual activity, suggests psychotherapist Brendan Madden.

By viewing the full results and using the drop-down menus in the interactive graphics, readers can compare their own levels of sexual activity with those of others in their age groups and sexual orientation.

We can see that sexual activity at least once a week falls considerably the longer people have been together: from three-quarters of those in relationships of between six months and two years, 60 per cent for couples together for two to seven years, 41 per cent for those together for seven to 15 years, and with a similar figure to those in relationships of 15 to 30 years. Couples in 30-year-plus relationships are still having sex, and almost one in three have it at least once a week.

Trish Murphy, a psychotherapist and The Irish Times columnist, calls it good news that the average is about once a week and that younger people aren’t as sexually active as many assume. “Most other sex surveys say that the average amount of sex is twice a week,”she says.

The most sexually active age group is the 25-34 category, where 51 per cent of both males and females are having sex one or more times a week. “Again, most assumptions would be that [people in] the 17-24 age group are having the most sex. Having this debunked is also very useful,” observes Murphy.

“These statistics fit with what I know,” says Emily Power Smith, a sexologist. She adds that people shouldn’t compare themselves to the stats in a way that makes them feel worse. “Six months to a year is what we know as the ‘honeymoon period’ . . . It is a physiological fact that we cannot keep producing the same hormones that we did in the beginning. Therefore we need different skills and levels of communication if we hope to sustain an exciting and satisfying sex life.”

A key question is: are people happy with their sex lives? Women are happiest overall, yet whether they are lesbian, heterosexual or bisexual, they still have around 50/50 rate of orgasming during sex. This would seem to suggest that the intimacy of a relationship is just as important as sexual “enjoyment” for women.

According to Margaret Dunne, a psychotherapist and psychosexual counsellor: “The survey discloses a sense of failure among a significant number of respondents when their partner did not orgasm during sex. Communication and realistic expectations are helpful in this context. Research shows that a high proportion of women do not orgasm during penetrative sex, but rather as a result of clitoral stimulation.”

Smith says studies show that “men want more sex and women want better sex. The higher satisfaction within the lesbian cohort is in line with other studies on sexual satisfaction based on quality.” Gay men were also happier with the sex they were having.

It may be surprising to many that the age of losing one’s virginity averaged at 19. This should take a lot of pressure off teenage girls who, Murphy suggests, sometimes feel pressure from other girls to get the deed over with.

We hope Irish Times readers will enjoy exploring the survey findings online. As Emily Power Smith says, “If we are going to live in a culture drenched in sexual imagery, sexual innuendo, sexual violence and unrealistic sexual expectations, then surely it is time to provide a platform for dialogue that can inform, educate and empower us to be able to make better choice.”

The Irish Times sex survey was conducted on irishtimes.com over the course of a week in June 2015. A total of 12,639 participants completed the survey (a 71 per cent completion rate), with 12,134 responses used in the follow-up analysis. Over 500 responses were excluded, the vast majority because the participant was under the age of 17 (below the required age to take part) or where it was obvious that false information had been provided. Click here for the full results.