Seaside advice: Never swim under the influence of emotional excitement 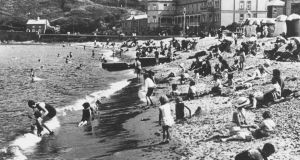 Tourists on the beach at Bray, County Wicklow, circa 1935. Photograph: Hulton Archive/Getty Images

Our archives contain much health advice, especially for those planning a “staycation” like generations before them.

Society columns in the late 19th century heralded the seasonal arrival of the upper classes at Bundoran, Tramore, Kilkee, and other sea resorts. However, the summer migration of Irish families had much humbler beginnings.

An 1899 article refers to an account from 1836. While on the road to Boyle, a writer witnessed country families in laden carts heading to cottages and cabins around the coast. He learned that “a few weeks at the seaside was considered absolutely necessary for the preservation of health, and that people of every class migrated thither annually with their families”.

But the annual seaside holiday gradually inspired a litany of health warnings and caveats, aside from any water safety concerns.

“Precautions in Sea-Bathing” from 1883 outlined instructions from the British Medical Journal for this “tonic restorative”. “The good effects of a plunge are in proportion to the vigour of the reaction which is excited in the bather’s body by the shock of immersion. The more marked and prolonged the reaction the better; The time of bathing is important. It is a common error to suppose it is best to bathe before breakfast . . . After the long fast of the sleeping hours, the vital functions fall to a relatively low ebb, and they are liable to undue depression from such a severe shock as a cold sea-bath . . .

“A bather should never enter the sea while under the influence of emotional excitement; if the nervous force be unduly concentrated in any single direction, a sea-bath is likely to produce nervous depression rather than stimulation. A bather should not stand hesitatingly by the water’s edge until he becomes cold and shivering, but plunge boldly into the sea at once . . . no one bathing for health only should remain in the open sea for more than 10 minutes . . . His object ought to be to excite an energetic reaction, and then to leave the water.”

There were also instructions for children at the seaside.

In 1893, Dr WM Powell wrote: “It is not wise to allow children to remain in the water over five minutes, and they should at once be taken to the bath-house, and not permitted to play in their wet bathing clothes on the beach, Before entering the water always wet the head, and if the sun is very hot the head should be protected by a light straw bathing hat . . . Three or four sea baths a week are quite sufficient for even the strongest of children. After the bath, a thorough rubbing down should be given, and the child quickly dressed.”

July, 1950 provided: “A few rules that the wise mother will put into force, when the children take a sea-side holiday . . . Ask any local doctor’s advice as to the cleanliness of the water – if it is likely to be contaminated by sewage – and so on. Never let a child bathe or swim while even suffering from the smallest colds . . . Teach children to breathe through the mouth only when swimming. A mouthful of water is much less likely to cause infection than germs inhaled through the nose. All swimming champions know this.”

In 1908, readers were warned to wait a day or two before swimming “until the system had been braced by the invigorating air”. A decade later they were told to consult their doctor before sea-bathing: “If after bathing you feel fresh and glow with heat, it certainly agrees with you, but if after coming out of the water you feel shivery and languid, and only want to rest all the afternoon, you should only give it up at once; it does not agree with you.”

The following year our correspondent noted: “It is a good idea to rest for at least half an hour after bathing either on the beach or on a couch . . . If headache follows bathing it is caused by pressure of blood in the head, and may be relieved by putting the feet into hot water. At most Continental bathing places a foot bath of warm water is always placed in the bathing machine or the dressing room.”

The restrictive bathing rules of the Royal Humane Society were regularly reiterated. These included:

The signs which forbid open-air bathing altogether are chilliness and shivering after entering the water, numbness of hands and feet.

“When the body is warm bathing may be indulged in, providing undressing is quickly accomplished, and the body is not chilled before it enters the water.”

Finally, from 1901 comes “A Hint About Health By The Seaside”, or rather seven hints.

‘This is war’: Irish health workers on their Covid-19 crises
3