Scoliosis surgery abroad: ‘She didn’t have anybody over there’ 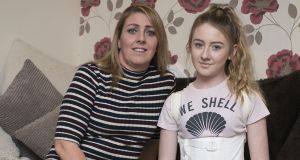 Denise Graham and her daughter Sophie (14). Sophie is wearing a medical “corset” following recent treatment for her scoliosis in the UK. Photograph: Dave Meehan

Sophie Graham (14) was one of the first children in Ireland to travel abroad for surgery to treat her aggressive scoliosis, under a Health Service Executive-funded programme.

She travelled to the Royal National Orthopaedic Hospital in Stanmore in England on August 18th with her mother, Denise, and had the operation the following day.

“I was there 24/7, I didn’t leave the hospital because she didn’t want me to leave. I had to leave the husband here to look after the other three kids,” her mother told The Irish Times.

Denise Graham spent four days after the surgery with her daughter in a recovery ward, save for an hour to return to a hotel for a shower: “It was tough to be over there with her, and not have anybody for back-up,” she said.

In all, 209 children with scoliosis – a condition where a person’s spine curves, often in a “S” shape, which causes difficulties walking and other health problems – now need operations.

Sophie was diagnosed with aggressive scoliosis in the summer, after a distortion in the curve of her back was noticed in March. Doctors from Stanmore travelled to Ireland to review Sophie’s case.

The Stanmore doctors told the family that they could operate on Sophie within 10-12 weeks, though it would be early next year before the same operation could be done in Ireland.

“You don’t really get a choice, your choice was get your daughter the operation [abroad], and if I don’t I’m going to watch her deteriorate. It’s a major spinal surgery. I found it very traumatic,” said Denise.

The Royal National performed 340 paediatric scoliosis operations last year, compared with the 184 that took place in Our Lady’s Children’s Hospital in Crumlin and the 75 carried out in Temple Street.

Saying that the care offered in Stanmore was excellent, Denise Graham said the journey home was difficult since Sophie was in severe pain when sitting upright.

She was very unwell for four days in the hospital ward. The pair had a 3½-hour journey home: “If we’d have been in Crumlin it would have been 15-20 minutes home into her own bed,” Denise said.

Claire Cahill from the Scoliosis Advocacy Network said some children require an ambulance transfer home after operations in Ireland, so a flight home for those who go abroad is “arduous”.

First Look: Dig In, the Maser-curated ‘art diner’ that’s about to open in Dublin
Real news has value SUBSCRIBE