Milk is having a moment

Is Irish butter and milk going to storm the supermarkets of the world and confound the standard nutritional advice that butter and dairy aren’t good for us? 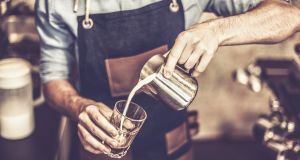 Milk has become the latest food to be gifted its own menu. Photograph: iStock

‘Raw Jersey milk okay?” asked the barista from Golden Bean Coffee. The lady in the queue directly ahead of me said yes, that was fine, she would like some of Nora Aherne’s east Cork farm fresh milk in her coffee.

It was Thursday morning at the Mahon Point farmer’s market, and I suddenly realised that the latest food to be gifted its own menu was milk.

This seems to be another example of the Paradox of Choice, where once simple food questions – such as ordering a gin and tonic, or a cup of coffee – have today become freighted with a multiple choice matrix.

But the trend away from regarding milk as a low-cost commodity food, and towards seeing it as a culinary speciality, isn’t just something for hipster baristas to worry about. There are good health reasons to be fussy about the milk and cream you consume, and there are health benefits to be enjoyed from the butter that you spread on your toast.

In Ireland, we all know that the cows that produce our milk and butter are cows who eat grass. But what we often don’t know is that, throughout most of the world, cows actually don’t eat grass.

Instead of being out on pasture, cows around the world spend their time indoors, eating rations. And, as a result, the quality of their milk suffers. They never get the chance to be outstanding in their field.

What happens to milk and butter if the cows are out in the field? New research, from scientists in UCC, Teagasc and the APC Microbiome Institute, and published in the Journal of Dairy Science, suggests that the milk has “significantly higher concentrations of healthy fatty acids”, according to Tom O’Callaghan of Teagasc.

And the butter made from the milk has higher Conjugated Linolic Acids (CLAs), fatty acids that may help to reduce weight and prevent cancer. The butter also has beta-carotene, which gives Irish pasture butter that healthy golden colour, in contrast to the lardy-white wan paleness of French butter, for example.

The conclusion of the researchers is simple: “These results provide scientific substantiation that dairy produce from pasture-fed animals is superior, from a compositional and nutritional perspective,” says Professor Paul Ross of UCC.

So, is Irish butter and milk going to storm the supermarkets of the world and confound the standard nutritional advice that butter and dairy aren’t good for us? Fat chance.

When the Department of Health revised its food pyramid recently, there was no reference to butter. Instead, the advice was to “choose mono or polyunsaturated reduced-fat or light spreads”.

Yeah, like everyone else, I just love polyunsaturated reduced-fat spread on my toast.

Aside from the Department of Health, however, milk and butter are going to keep on having their moment. In my local wholefood shop I can buy milk from two local farms, one of them unpasteurised, and more baristas and cafés are introducing milk menus to complement their coffee menus. Milk isn’t a commodity: it’s our culture.