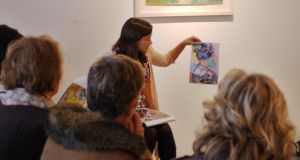 Education curator Bairbre-Ann Harkin leads a discussion about May Guinness’s wild use of colour during a guided visit in Butler Gallery. Photograph: Ailis Feehan. Image courtesy of Butler Gallery

Making art galleries dementia-friendly spaces is the aim of the Azure programme which is being rolled out nationwide, inspired by the Museum of Modern Art (MoMA) in New York.

The idea is that people with Alzheimer’s or dementia will engage with art, aided by facilitators.

It’s all about breaking down the social isolation that dementia sufferers can experience, and it has already been adopted by the Butler Gallery in Kilkenny. In the autumn, the gallery will launch monthly tours for people living with dementia who don’t want to visit the space as part of a support group. Instead they can visit the gallery with family members as a social outlet that provides an opportunity to re-connect with their loved ones.

Other galleries rolling out the programme include the West Cork Arts Centre, Galway Arts Centre, the National Gallery, the Chester Beatty Library in Dublin and the Luan Gallery in Athlone. Azure is supported by the Alzheimer’s Society of Ireland, and Age and Opportunity.

The galleries will offer tours focusing on their exhibitions. The artworks will be discussed in a way that doesn’t necessitate memory recall. Arts Council research shows that almost 40 per cent of Irish people aged 55 and over regularly visit art galleries. Most people with dementia are over 65.

In May, as part of the Bealtaine Festival, a series of workshops was held at the Irish Museum of Modern Art (Imma) to help care professionals make art accessible to people with Alzheimer’s disease and dementia.

The workshops were led by Laurel Humble, assistant educator at MoMA. She is co-author of the award-winning publication, Meet Me: Making Art Accessible to People with Dementia.

Humble says that visual art is an ideal topic of conversation for people with dementia and Alzheimer’s.

“One of the biggest issues with Alzheimer’s disease is short-term memory loss. You don’t need your memory to continue to look at art and discuss it. It’s constant throughout the entire conversation.

“Each conversation, in front of an art work, would last for 10-15 minutes. You can really talk about it in-depth. It triggers a lot of reactions and, with the help of a facilitator, it invites opinions and ideas and maybe personal connections. The facilitator will build a conversation around three, four or five art works that are connected by a theme.”

Research shows that people with dementia often doubt their abilities.

“Looking at and discussing art allows people to reaffirm that their opinions are still valid and that they have the ability to engage with art.

“One of the other great things about engaging with art is that people can better understand themselves and other people.”

Bairbre-Ann Harkin, head of education at the Butler Gallery, underwent an internship with MoMA where she assisted in programmes including ‘Meet Me’.

She believes the Azure programme can help relationships enormously, allowing them to “go back to normal”.

“Azure is about trying to create moments where, at least during the programme, people stop being ‘the person with dementia and their carer’ and, in some ways, go back to being husband and wife, mother and son, father and daughter, sister and brother. Programmes like this allow for that moment, and that is a real privilege to see.”

Ciaran McKinney, head of arts and culture at Age and Opportunity, says the workshops at Imma led by Humble and the establishment of the network of those taking part, “will deliver more than the sum of its parts”.

“Quite a lot of people said it was fantastic to spend three days with other museum educators and curators from around the country. We’re going to call everybody back to a networking day where they can talk about their experiences since the training. That will probably happen in November.”

The arts, says McKinney, are increasingly recognised “as being really helpful for people living with dementia”.

“It can be an experience of being in the now. It’s not about the past. Also, it’s not about needing to refer only to safe material . . . People with dementia have the same rights as the rest of us to be shown something that is challenging, new or avant garde. To really hate an art work is just as valid as loving a piece.

“People with dementia, thanks to the training of facilitators, will acquire a skill in ways of engaging. They may not always answer questions in the most coherent way. But there will be a ‘now’ moment for the person with dementia and their family member or carer. It becomes a shared experience. That’s really important.”

The Azure programme is not costly, says McKinney. “There is no need for special programming. Whatever programme is in place can be made more accessible to another population. That can be done via paid staff or through using external facilitators. Sessions will be set aside so that people with dementia can come in and take part in the programme.”

McKinney adds: “What people are surprised about [with Azure] is how ‘ordinary’ and ‘common-sense’ it all is. It is mostly about making people aware of the various behaviours of people who experience dementia, answering any fears or misconceptions about working with them and building good habits to make sure you really listen and respond to what is happening in any session, even if it was not part of your original plan.”

About 48,000 people in Ireland have dementia and this is set to double in the next 16 years. According to research by New York University, participative arts help people with the disease.

It found that those with dementia and their carers reported greater self-confidence and elevated mood as a result of their exposure to art.

Sofa so good: A guide to sitting comfortably
6

Lonely in lockdown? Get yourself a bottom-sniffer
Real news has value SUBSCRIBE