Who is most likely to hit the ‘wall’ during the Dublin marathon?

An Irish runner and professor has analysed data from 150,000 Dublin City Marathon runners 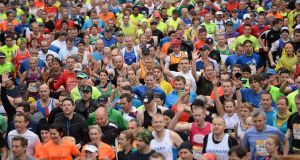 Like his infamous motorised cousin, the boy racer, a young male marathoner can be his own worst enemy, according to new research from University College Dublin (UCD). The research shows men are more than twice as likely as women to hit “the wall” over the course of their race.

Inexperience rather than age is the biggest danger, the study suggests.

Prof Barry Smyth, from UCD’s Insight Centre for Data Analytics and a runner himself, is fascinated by the Dublin marathon. Now this personal interest has spilled into his professional life – he has studied the races run by some 150,000 participants in the Dublin marathon over the last decade or so.

The findings are pretty stark: women and older runners (regardless of sex) are more disciplined when it comes to planning and pacing their race. Less experienced male participants are by far the most likely to take off too quickly and suffer for it through the closing stages.

“I wasn’t surprised that men turned out to be generally faster than women,” says Smyth, who will be running Dublin himself for the third time this year. “That much would be kind of expected, but I was surprised that women are so much more disciplined where pace is concerned. They run a far more controlled race.

“But then, maybe there’s something to that clichéd image of the cocky man heading off at a clip and suffering later, while women are more disciplined in what they are doing. Maybe it shouldn’t be that much of a surprise at all.”

Either way, the upshot is that men, he reckons, are two to three times more likely to hit the dreaded “wall” during the race. For the purpose of his research, he defines “hitting the wall” as suffering a 30 per cent decline in pace over the closing stages of the race.

He also found a surprising number of runners who run the final 10km at a pace significantly above their average speed, which suggests some runners fail to achieve their potential because they are actually too cautious.

Those who appear to run the best races across a wide range of abilities, it seems, tend to run quickest between the 25th and 30th kilometres, although this could be almost incidental to the even pace or negative split (a faster pace over the second half of the race) strategies generally pursued by better, more seasoned runners.

By far the bigger problem is emptying the tank too quickly, a mistake that a remarkable 65 per cent of first timers make, he has found. However, that figure is down to below 20 for those who return to race the distance even a second time.

“It’s an easy lesson to learn because if you go off too fast, you really pay for it later on so it’s probably not something you’re going to want to do again,” he says.

On a closely related front, he has found that older runners are better when it comes to effective race strategies. “Just by the nature of these things, they tend to have run more marathons,” he says. “After 40 is when your speed tends to go but if you have run a marathon or two before then your pace control is likely to be much better.

“Essentially experience is the great antidote to age. Even if you (have completed) three or four marathons, you can take the equivalent of a decade off your finishing time,” he says.

And even if you haven’t got the experience of previous marathons, he has found that there is probably an easy, effective and pretty obvious shortcut – race pacers. These are the experienced runners who run the race, with their time displayed and a flag in the air, specifically to help others achieve their race day goals.

“The data tends to suggest that those who cross the line after running with pace groups are five times more likely to have run even splits,” he says.

There is no specific data on who has run with these groups but Smyth has looked at the results from up to a dozen other big city marathons and where the times run by the pacers change, say from 10 to 15-minute intervals, the same spikes are there. This is firm evidence, it seems, that the best way to run an even time and so achieve your goal might be to follow the flag with the corresponding numbers.

“My first marathon was a bit of a disaster, I was all over the place,” he says. “But my second was much better; I went with a pace group and then pushed from them after 10km and it played a big part in getting me through that early chaotic part of the race when people’s heads tend to go and they get carried away with it all.

“This year I’m hoping to do 3:30 and I certainly think I’ll be going with the pace group; the work I’ve done strongly supports the idea that they have a big role to play.”

3. Age matters. Last year, more than half of the finishers were over the age of 40.

4. Pace yourself. Starting too fast can ruin your race. About a third of Dublin runners start out too fast and this adds 10s of minutes to the finish times as well as greatly increasing the likelihood that they will hit the wall.

5. The wall. Although overall only 5 per cent of people hit the dreaded wall, the likelihood of hitting the wall is much higher for those finishing over 4.5 hours. For example, 20 per cent of men who finish at five hours hit the wall. In general, men hit the wall a lot more often than women.

6. Runners are getting faster Last year, 40 per cent of finishers completed the course in under four hours. Only a quarter of runners managed the same feat in 2000. The average finishing time has fallen from 305 minutes in 2000 to just over 255 minutes in 2015, a difference of 50 minutes.

Prof Barry Smyth’s articles on his marathon-related data analysis can be read at https://medium.com/@barrysmyth He is a governor of The Irish Times Trust.