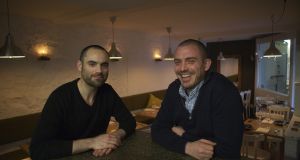 One of Dublin’s smallest restaurants has become the only Irish restaurant to receive a new Michelin star.

Chef Damien Grey of Heron and Grey in Blackrock Market was awarded the star at a live event in London on Monday morning.

Grey and his front of house partner Andrew Heron took over the tiny restaurant, formerly known as The Canteen, in December.

Seating just 18 people the restaurant works out of tiny kitchen. There are no windows and no view. Heron and Grey serves a €48 five-course tasting menu.

No Irish restaurant lost a star this year, compared to the shock last year when Kevin Thornton lost his long-held star.

He told The Irish Times last month that he is closing Thorntons at the end of October, saying losing the Michelin star felt like a ‘stab in the heart’

The new star for Heron and Grey brings to 12 the number of Michelin starred restaurants on the island of Ireland, two in the north and 10 in the south.

All of the single starred restaurants retained their stars and Restaurant Patrick Guilbaud retained its two star in the 2017 Michelin Guide to Britain and Ireland.

In Dublin, Chapter One, L’Ecrivain – whose proprietor Derry Clarke did a podcast in The Irish Times – and The Greenhouse held on to one star each.

Earlier this year, Irish sommelier Julie Dupouy – who works in the Greenhouse – was named the third best sommelier in the world.

One star was also retained by Aniar and Loam restaurants in Galway, Campagne and Lady Helen at Mount Juliet Hotel in Kilkenny, and House Restaurant at Cliff House Hotel, in Ardmore, Waterford.

Also in Northern Ireland, Wine and Brine, in Moira, Co Armagh, was awarded a Bib Gourmand listing for the first time.

The Bib is a separate award for restaurants that offer good food at more affordable prices.

Belfast-based restaurants Deanes at Queens, Bar+Grill at James Street South, and Home have all kept their Bib Gourmand awards, as have The Old Schoolhouse Inn, in Newtownards, and Fontana, in Holywood.

Five Bibs were dished out in Dublin – to Delahunt, Etto, Pichet, The Pig’s Ear and Pigeon House.

They were joined by The Copper Hen, in Tramore, Co Waterford, Giovannelli, in Killorglin, Co Kerry, Bastion and Fishy Fishy, both in Kinsale, Co Cork, and Wild Honey Inn, in Lisdoonvarna, Co Clare.

Every other recipient of Michelin’s 20 new stars was a male chef.

The awards ceremony at the Institute of Engineering and Technology at Savoy Place in London heard that Smyth was “chosen by the inspectors because she’s been such an outstanding role model.”

“Thank you so much. It’s been amazing to win,” Smyth said. “I didn’t expect it at all.”

The other news from the launch was the return of three-star status to Heston Blumenthal’s The Fat Duck Restaurant.