The waiter urged caution when we ordered, but did we listen? 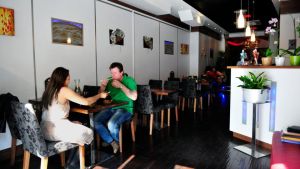 This article is over 6 years old

It serves me right really. Our Chinese waiter, Lei, looks a little alarmed when we order the Bossam, a dish of spiced pork belly with trimmings. “European people don’t like this,” he explains diplomatically nudging us towards a different pork plate. “I think it sounds great,” I say flashing my best “we’re gutsy eaters”. I’ve eaten my body weight in pork belly, gnawed (and liked) chicken’s feet, and swallowed half of a pig’s eyeball. What can be so challenging about a platter of spiced pork meat?

We’re in Hilan Korean restaurant on Dame Street. It’s a new sister restaurant to the Capel Street original and slap bang in the middle of one of Dublin’s busiest tourist strips. It has the feel of a Parnell-Street-lite ethnic restaurant with 98FM playing and stainless steel cutlery in a pot on the table alongside the chopsticks.

I’ve heard they serve a rice dish with a raw egg on top that you stir in to the mix and am chuffed to find a version that comes with sea eel. It’s called Bibimbap, which means “mixed rice”. Lei calls it Bibimbam, which sounds like a children’s TV show. “I’m Chinese so I can’t pronounce it properly,” he says smiling.

First up I get the kimchi pancake and it arrives on the lovely glazed dinner plate as a single pancake, like a slim omelette. The egg has dialled down the chilli spices in the kimchi to a small hum of heat in the background and there’s a sesame sprinkled soy and vinegar dipping sauce to give it another tang.

Across the table there are six chicken and scallion fried dumplings, which have had their boiled texture crisped on a pan moments earlier. They are wolfed down.

My bibimbap arrives in a hot pot, still cooking the white of an egg while the yolk sits on top. It seems a shame to turn this lovely-looking pot of food into stirabout. The rice is decorated with chunks of skin-on eel that sit on a bed of tiny orange beads of fish roe. There are crisp ribbons of dried seaweed scattered on top and that raw yolk sitting like a golden eye off to one side. But stir you must, and soon, so that the heat of the pot and the rice will cook the egg yolk into a delicious bowl of comforting food. There’s a side pot of sauce. It looks innocent, like tomato sauce, but it is to ketchup what a full-body slam is to a limp handshake. A honey-brown miso soup has wafer-thin slices of potato, courgette and scallion alongside floating cubes of tofu.

And the bossam? I can see why it’s not a cross-cultural hit. The pork is the most bellyish piece of pork I’ve seen in Dublin. It’s in chunks with a layer of brown boiled skin still on, then a wodge of fat and finally the meat. We’re used to eating pork belly with the fat rendered into the meat (melting its chewiness) and the skin disappeared into the bin. These brown chunks sit in the middle of a plate, plain and unadorned as a tax demand. In separate wells around the plate there are slices of raw garlic and chilli in one, a fiery “freshly-made” kimchi in another, white slices of sweetly pickled daikon radish and pickled peppers.

The menu mentioned fermented shrimp but there’s no sign of it. The kitchen may have decided it was a step too far even for culinary explorers.

We order a second set of pork dumplings to atone for my ambition and chew happily on the sweet slices of daikon.

I finish with a lovely pot of barley tea. In China they drink different teas according to the season . Barley is winter tea and it’s served here year-round which says a lot about the view of the Irish climate. I’ll happily spend my own money in this friendly Korean restaurant again. But next time I’ll listen to the experts. They know their audience.

Dinner for two with four Chinese beers came to €56.50