Kale is flavour of the month in the diet and fitness world – but why? 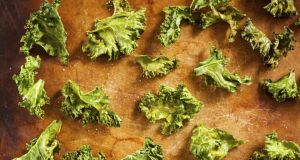 There’s something of a kale craze going on. North Dublin vegetable grower Derek Ryan has seen demand increase 25 per cent year on year for the past three years. That’s quite apart from what he describes as “a little bit of a giddy spell over Halloween”.

Ryan harvests the produce in a new way. From September he picks the young leaves discarding the tough, arching stems, and sells it in 250g bags. He got the idea from looking at bags of baby spinach leaves.

Ryan (36) is the fourth generation of his family to grow vegetables. Thanks to an increase in the number of television shows about food and diet, kale is in fashion. “It’s one of the superfoods. They’re always recommending it on Operation Transformation,” he says.

The only question left worth asking is: does anyone really like kale? The short answer to that is: not until quite recently. John Wyler, the chef at Forest Avenue restaurant in Dublin, has had kale on the menu since November, where it can be found in risottos or blanched in boiling water, refreshed in cold water and fried with seasoning and a touch of garlic.

Both Ryan and Wyler agree that in the vegetable world, cavolo nero could be the next big thing. But for now it’s all about kale.

Method
Preheat oven to 180 degrees. In a bowl, combine the kale and a tablespoon of olive oil. Use your fingers to massage the oil into the kale. If it seems dry, add more oil. Season with chilli powder and salt, tossing to coat. Spread the kale on to two baking sheets. Bake until it looks crisp (about 10-15 minutes), rotating the baking sheets halfway through.

Expert tips: A dentist on how to have perfect teeth
9