Along the winding country roads of the Cooley Peninsula, this is a pub you could easily call home 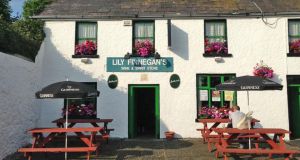 Country roads take you home but also back in time, and the winding lanes around Carlingford Lough promise exactly this.

About 2km from Carlingford town you’ll be encouraged to divert off the main road by a sign reading “Pub”. On closer inspection it also reads Lily Finnegan’s, although in much smaller type, because, if you’re going off-road around this part of the Cooley peninsula there can be only one pub you’re searching for and that’s the 180-year-old whitewashed home of Lily Finnegan. Lily is gone now, but her picture still hangs proudly on the bar, where local man Derek McGarrity is at the helm.

It really is in the middle of nowhere but, with local patronage that includes the rugby-playing Kearney brothers, Rob and Dave, and a fabled night in 1985 when Bruce Springsteen bought all the local farmers a round of drinks, it’s a well-tested destination.

It’s my first visit but I’m immediately at home. The stone floor, the wooden dresser, the snug that was once a bedroom, the plea from Derek that he hasn’t had a chance to paint the exterior since winter so maybe I could return the following week to take pictures (and that’s before he knows I’m writing about it) It’s just an easy place to relax in and stuffed full of atmosphere - the open fire and salty sea air combining into crackling good humour as locals stroll in.

Sports count here and every big game in every discipline is screened, but the TV is switched off once the final whistle blows. Music takes pride of place then. Pictures of outdoor gigs suggest this is a country lane that’s never quiet for long. Take a trip to Lily Finnegan’s soon – you might just find your own way home.

Ask the expert: Dealing with a slap-happy one year old
5