British Labour leader candidate Jeremy Corbyn made some suggestions about women, safety and public transport. His opponents had a lot to say about it 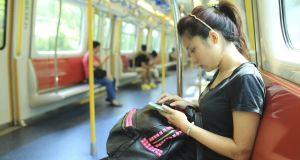 “Some women have raised with me that a solution to the rise in assault and harassment on public transport could be to introduce women-only train carriages,” says British Labour leader candidate Jeremy Corbyn.

One suspects that, for some people, anything British Labour Party leadership candidate Jeremy Corbyn says will be a red rag to their proverbial bull.

“You beast Corbyn. How could you even say that? Fluffy kittens, for God’s sake,” shouts his disaffected opponent.

Now Corbyn has put that fluffy kitten amongst the pigeons by suggesting that there should be women-only carriages on trains.

“My intention would be to make public transport safer for everyone from the train platform, to the bus stop, to on the mode of transport itself. However, I would consult with women and open it up to hear their views on whether women-only carriages would be welcome,” he said.

“Consult with women”? You, beast, Corbyn.

From the reactions of his leadership rivals, asking the opinion of women would appear to be a radical step.

“Why should we have to shut ourselves away to stay safe?” tweeted Cooper.

Kendall said that sexual harassment and violence against women was a serious issue, but she did not agree that women-only carriages were the answer.

Burnham said: “In this day and age, we shouldn’t be even considering the idea of segregated train travel.”

Continuing the consultation on women-only carriages, Orla O’Connor, director of the National Women’s Council of Ireland, said that women should not have to take “responsibility” by sitting in “a particular carriage.”

“The responsibility is on men not to harass,” she told The Irish Times.

A recent European human rights report found that over 60 per cent of women in Ireland avoid certain areas and activities for “fear of harassment,” she said.

“Sexual harassment is a crime – we need to start focusing our efforts on targeting perpetrators, and stop blaming women.”

Women in Britain are finding things bleak, too. The number of recorded sexual offences on trains and at stations has risen 25 per cent to a record level, British Transport Police (BTP) figures for last year show.

Despite the rising figures, some think there is no need to discuss women-only carriages. Public space should be safe for everyone, Anne Perkins wrote in the Guardian, before levelling the charge of “dungaree feminism” at Corbyn, who should probably not rely on her vote.

“I can remember when this was exactly the kind of inspirational policy that was the subject of much urgent discussion – in about, oh, 1975.”

As a fan of dungarees, I think female-only carriages on trains would be fun.

A Tipperary supporter told me that he would be keen to see County carriages introduced on Irish trains. “I don’t want to be heading to Croke Park and having to share a carriage with Cork fans,” he said, with a smile.

There are female-only carriages on trains in India, Japan, and Iran. “Ladies only” compartments were first introduced in Britain in 1874 by the Metropolitan Railway. Take up was too low for them to last, however.

Whatever your opinion on women-only train carriages, in Corbyn’s policy document he also recommends: a police hotline staffed by women to deal with sexual harassment and assault cases and introducing a minister responsible for women’s safety.

There are as many ways to have a conversation on public safety as there are to skin a fluffy kitten, it seems. And as many opinions on how to do it.