The California city’s Walking the Rebellion tour includes curiosities like the site of the Sinn Féin Shoe Store, which helped fund the Irish republican cause 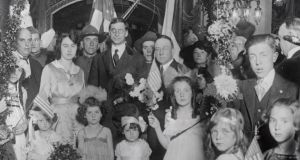 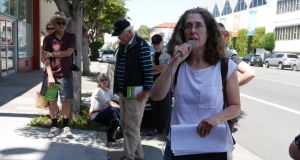 Walking the Rebellion: Elizabeth Creely takes visitors on a 1916-themed tour of the Mission District in San Francisco

It’s not what you expect to see on the streets of the Mission District of San Francisco: a large, disparate crowd, on a walking tour of the area, listening to a series of detailed talks about the area’s Irish heritage, particularly the republican support network that the neighbourhood fostered a century ago.

The Mission is a traditionally Latino quarter that has been gentrified in recent years by an influx of young technology workers – and Walking the Rebellion, as the tour is called, only confirms how dramatically an area can change over time.

Although Dublin was the locus of the 1916 Rising, the ripples from that brief conflict spread far and wide, and on the streets of San Francisco today you can still see traces of how it affected this far-flung community of Irish emigres.

The tour’s creator and guide, Elizabeth Creely, expertly traces the area’s Irish republican heritage and how the Irish community reacted to the Easter Rising and the struggle for independence that followed, stopping at various landmarks, from the site of the Hibernia Hall community centre that stood at 454 Valencia Street, in the north of the Mission, to St Peter’s Catholic Church on 24th Street, near the southern edge of the district.

A writer and historian, Creely began to devise the tour with the Irish-American Crossroads festival, in association with a group called Shaping San Francisco, which does historical tours, as a way of marking the centenary of the Rising.

“I wanted to focus on a popular people’s history for 1916,” says Creely, whose Irish ancestors came from Armagh and arrived in San Francisco in the 1850s. “A walking tour is a more intersectional approach, which is critical to opening Irish history out of its insular, Catholic-dominated narrative. Working with Shaping San Francisco has allowed us to intersect with urban history, and relate Irish-American history to that, rather than the exceptionalist individualist history that is typically offered up.”

Creely had expected significant interest but was still surprised when more than 100 people turned up for the initial tour, to coincide with the centenary. “I knew it was going to be popular. I thought I was going to do it once, and 110 people turned up, so I did it again. And then we got a publicity bump in the San Francisco Chronicle, and it was insane, and everyone wanted to come, so I scheduled a few more.”

So popular has it been that, having taken a break in the autumn to focus on further research into the era, Creely responded to requests and has scheduled more later in the year.

The audience ranges widely in age, and although it is largely of Irish descent it includes people of many other ethnicities, all keenly listening to Creely’s mini-lectures at each stop. Green maps point out the Irish businesses in the neighbourhood in 1916-20, including such patriotic retailers as the Sinn Féin Shoe Store, a portion of whose profits went towards the republican cause.

The Irish community in San Francisco had largely relocated to the Mission from the area south of Market Street after the 1906 earthquake that devastated the city centre. Construction on Hibernia Hall began in 1907, and by 1916 it served as a meeting hall for many Irish organisations, among them the Ancient Order of Hibernians, the Gaelic League and the Fenian Brotherhood, operating as a hub for the Irish community by the end of the decade – a period when Éamon de Valera visited the city, during his tour of the US in support of Irish independence.

The Rising prompted an escalation in Irish republican activity in the area; the Sinn Féin Shoe Store, which was run by Daniel Harnedy, a Cork man, and Thomas MacNaboe, operated as a Clan na Gael outpost; today the site is home to a mobile-phone shop. Harnedy was prominent in the “Hindu-German conspiracy”, when Irish republicans in Clan na Gael and Indian nationalists in the Ghadar Party, both active in the Mission, plotted with German officials to smuggle weapons to India to undermine Britain during the first World War.

By the 1960s and 1970s the Irish community had moved west, to the Sunset neighbourhood, and the Mission became increasingly Latino. But the area is undergoing another significant demographic shift, as young, well-paid technology workers pour into the neighbourhood, attracted by the cafes, restaurants and nightlife.

The Hispanic and working-class community that has dominated the Mission for decades is increasingly being pushed out as rents rocket.

“The walking tour took off because the Mission district is changing once again, and when cities or neighbourhoods change there comes a sense of nostalgia, a sense of that moment when you know things are changing and disappearing, and you’re trying to grab on to stories from the past.”

This article was supported by the Global Irish Media Fund