'Irish Heart, Coventry Home' is a documentary made by the Coventry Irish Society featuring interviews with some of the thousands of Irish people that have emigrated to the north of England city. 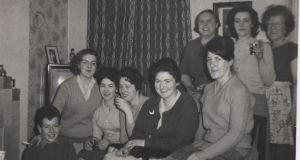 'Irish Heart, Coventry Home' explores the experience of 65 Irish people who moved to Coventry between 1940 and 1970. Photograph: Coventry Irish Society

In 1961, around 20,000 Irish-born people were living in Coventry, according to the UK census, contributing to the economy, culture and character of the city. It was a dramatic increase on previous decades.

But when President Michael D Higgins visited the city in 2014, there was little official record of the Irish community’s significance, and the influx of Irish from the 1940s to 70s. To address this, the Coventry Irish Society secured funding for an oral history of the community, and I was appointed project officer in 2017.

Since then I have spoken to Irish immigrants from different walks of life, including former nurses, construction workers, bus drivers and musicians. I also made a concerted effort to include Irish women, who came to Britain in higher numbers than men but are often forgotten in these histories.

The Irish Heart, Coventry Home exhibition is open at the Herbert Art Gallery and Museum in Coventry until April 10th, featuring a film about Irish migration to the city based on interviews with 65 people.

Interviewees described how they settled in the city by establishing Gaelic sports teams, Catholic churches and Irish social clubs. Sadie Brady, who migrated from Co Mayo, recalled how:

“The clubs were a great source of employment … a guy might arrive off the boat with no money, but they would go there and just ask ‘is there any chance of a start?’ And he would have a chance the following morning.”

The clubs also served a social function; Irish showbands, sometimes banned in Ireland during Lent, would travel over to Coventry and play in venues such as the Banba. Many of these clubs are now closed, but their legacy endures: Joseph Goyer from Dublin remembered how “they were great meeting places for young Irish people… half the marriages in Coventry are from one of those places”.

In the exhibition we have marked the importance of these clubs by building an Irish bar and adorning it with items from different Irish venues in the city.

A fascinating strand of the project has been researching the poet John Hewitt, who moved from Belfast to Coventry in 1957 to become director at the Herbert Museum. He passed away in 1987, but last year I travelled to the John Hewitt Summer School in Armagh to interview people who had known him.

It is fitting that the Herbert Museum, the venue for our exhibition, was Hewitt’s old workplace, and the launch event was one of the biggest nights in the Museum’s history. We welcomed around 700 attendees, including Cork City Councillor Kieran McCarthy, who travelled from Coventry’s twin city.

The night was a fine showcase of Coventry-Irish culture, with music from Joe O’Donnell and extracts from the plays of Kathi Leahy, which were acted by a stellar cast including Coventry-born actor Tamla Kari.

Many of the interviewees attended with their families and it felt like a milestone for the community. The celebrations lasted long into the night and the vivacity of the audience showed how the Irish are not a relic from Coventry’s past; they continue to play a vital role in the city.

Irish Heart, Coventry Home is funded by the Heritage Lottery Fund, Coventry City Council, Deeley Construction and Cork City Council, which is Coventry’s twin city. It has been put together by the Coventry Irish Society (coventryirishsociety.co.uk) which is supported by the Irish Government’s Emigrant Support Programme. The exhibition runs until April 10th. Watch the full documentary at youtube.com/watch?v=glZAIP2aQmA&t=5s