I am not an expat. I’m an Irish millennial economic migrant

Expatriates go abroad when their employers ask them to. I was forced to leave my country. Norway, at least, has a more inclusive vision 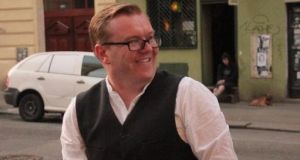 David Toms: “Now I am in Norway, a country that has been famously generous in taking in refugees over the years. But even here, there is a sense some are expats and others are immigrants.” 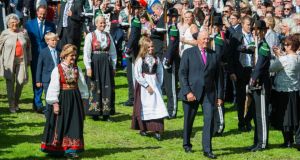 Pluralist: King Harald arrives at the garden party where he made his speech, in September. Photograph: Fredrik Varfjell/AFP/Getty

Not long after I moved to Norway, earlier this year, King Harald V gave a speech about what it meant to be Norwegian. It was a pluralist and inclusive vision of Norwegian identity and society. The video went viral. With the election of Donald Trump as president-elect of the United States, such a vision – open and tolerant – seems all the more important.

There is a double standard about the language that we use to describe ourselves and that others use to describe us while abroad. Although people often use it as a shorthand to describe people like me, I am not an expat. An expat is someone who is working for a multinational company and is asked to go to work for a time, whether brief or extended, at a company base overseas.

Every city has plenty of legitimate expats. They are usually on a salary based on their home earnings, or on a salary to maintain their standard of living in line with the cost of living in their temporary home. Plenty of people can rightly identify as expats. I am not one of them. I know I am not alone in this game of labels.

I am an economic migrant. I am an Irish millennial whom the crash has chewed up and spat out. I left Ireland because I felt I had little other option. I spent four years getting a PhD in history, which I managed on a combination of grants, scholarships and part-time teaching.

Afterwards I worked as a part-time lecturer. I went to conferences. Published papers. Wrote a book. Applied for jobs. For funding. For postdocs. I tried to get work teaching in adult education. I really tried.

I applied for work in Ireland. In Britain. In Denmark. I applied for jobs anywhere I thought I might not be completely miserable. Eventually, with my jobs drying up at home and a sense of inertia taking over, I moved. Before coming to Norway I had spent 15 months in Prague.

The attitude towards people like me in Prague was strange. There, as in many European countries at present, they did not like immigrants. Immigrants were bogeymen. But I was not an immigrant in their eyes. I was an expat. Even in a place that insists it’s in central rather than eastern Europea I was a westerner. I was a native English speaker. I was the good kind of immigrant. I was the kind of immigrant they wanted. White. Western. Male. This was my experience of the difference between expats and immigrants.

The idea of Ireland as a progressive and advanced country, the public-relations machine of the Celtic Tiger, was successful in the Czech Republic. It was exhausting to explain, to remember. When I thought about this I thought about the homelessness crisis, youth unemployment.

In Prague the word immigrant really meant nonwhite. Plenty of white foreigners there happily bought into the idea of themselves as expats, even if they were not really expats. The expat label enabled them to live in a bubble, one that shielded them from engaging with Czech culture or identifying with nonwhite immigrants. Of course, plenty of good people from all over the anglophone world whom I knew there rejected the expat label.

When I was living in Prague the Syrian refugee crisis deepened and came increasingly to the attention of our media. They marched in solidarity with Czechs who wanted to let refugees know that they were welcome. News outlets fought the debate about the terms migrant and refugee.

Now I am in Norway, a country that has been famously generous in taking in refugees over the years, but even here there is a sense that some are expats and others are immigrants. As in Prague, so too in Oslo and elsewhere in Norway: there are plenty who are genuine expats. They have every right to identify as such. But I am not one of them.

As someone with blond hair I am often mistaken for a native Norwegian, even though I could not be further from one. In a crowd of people here I do not stand out, because I am white and blond.

This gives me an unfair advantage in lots of things over people whose skin colour or clothing marks them out as ethnically or religiously different from the bulk of the population. Just as it was important to stop viewing people from Syria as migrants, and understand their plight as those of any refugee, it is important to understand that not everyone who moves away is an expat.

Emigration from Ireland may no longer bear the hallmarks of the seasonal migration of the more recent past, or the permanent migrations of the 19th and early 20th centuries, but emigration is still emigration.

It might look different from the images in people’s minds. There are still push and pull factors. It is important for those who might be labelled as expats, but who are not, to show solidarity with their fellow migrants and say that they, too, are immigrants in their new societies.

David Toms works at the Dubliner in Oslo. He blogs at thesidelinesofhistory.wordpress.comand tweets @daithitoms. You can watch King Harald’s speech at iti.ms/2hprMmL