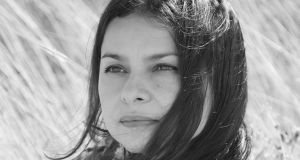 Hope Sandoval: “Music soothes you, especially when you write, sing or play an instrument. It really can be a cure for everything”

Even though Martello towers are more readily associated with James Joyce, Irish-American duo Hope Sandoval and the Warm Inventions made a little bit of history last winter by recording their third album, Until the Hunter, in two of Dublin’s seaside forts in Sutton and Dalkey.

The Warm Inventions are a musical partnership that shouldn’t make so much sense. American singer Hope Sandoval of Mazzy Star made indie kids swoon with the dreamy, mellow hit Fade into You back in the mists of 1993, while her multi-instrumentalist co-writer, Colm Ó Cíosóig, is best known for banging the drums for Anglo-Irish live noise terrorists My Bloody Valentine.

Sandoval has a reputation for being reclusive, which arguably applies to any musician who doesn’t post daily selfies to Instagram. However, when Ó Cíosóig connects her via Skype to his laptop in a Dublin hotel, she is talkative and friendly.

“Martello towers are great places to work in,” Sandoval says. “We’re really lucky because we have a portable studio, which enables us to work wherever we like. There is some extra work involved in setting everything up, but you can find a lot of magic and inspiration in being free to go somewhere completely different.”

After initial recording sessions in Berkeley, California, Ó Cíosóig searched for places to stay on Airbnb and discovered the Sutton and Dalkey towers were available to rent. “There is an underlining history of these towers being places to escape from the norm,” he says. “It was great not to be in a regular square building. Also, the reverb dies naturally because of the circular dimensions.”

The unique atmosphere of these stone spaces can be heard on the album’s haunting opening track, Into the Trees. “I just got an organ shipped over from Germany,” Sandoval says. “The first time I ever played it was in the Dalkey tower. We had a really crazy jam session very late at night. The organ sounded amazing in that room. Colm was going from really wild drums to really slow, hypnotic percussion.”

What Ó Cíosóig didn’t foresee was the high cost of keeping the Inventions warm. “I didn’t realise heating wasn’t included in the Dalkey tower bill, so I had to pay that separately. A Martello tower gets extremely cold if you don’t keep the heating on, as they’re essentially gigantic granite fridges.”

The experience encouraged Ó Cíosóig to consider other unusual settings. “You can do a course in California to learn how to build a dome. They’re essentially round-earth emergency shelters you can construct for about five grand. They’re very cheap structures and very, very solid, so they’re great for earthquakes and hot and cold climates, as they’re of Iranian origin. I might well experiment with them in the future.”

American singer-songwriter and former member of the War on Drugs Kurt Vile duets with Sandoval on the album’s first single Let Me Get There. “Initially, I sung all of it,” says Sandoval. “After a while, we thought it would be nice to do it as a duet. Kurt was playing a show at the Fillmore in San Francisco, so he just stopped by before his sound check and we did it in a couple of hours.”

An even more unusual guest is a street musician called Michael Masley. “We just stumbled upon him in Berkeley,” Ó Cíosóig says. “He was sitting there for hours playing this very hypnotic music through these little battery powered speakers, which sounded like it was beamed from outer space. Years ago, he invented these sound hammers to put on his fingers that look like something out of Edward Scissorhands.”

Other contributors to the Warm Inventions over the years include Dirt Blue Gene, who Ó Cíosóig calls “a low-key Irish band who don’t play much”, and own a studio in Blessington where Sandoval and Ó Cíosóig partly recorded their second album Through the Devil Softly. “We always like to play with different people,” he says. “We’re really much more of a collective rather than a band. This approach opens up a lot of different paths, so we don’t have to go any particular set way and we give ourselves plenty of opportunities to explore lots of territory.”

Their debut album, Bavarian Fruit Bread, came out in the wake of 9/11 and was subsequently appraised as a tonic for the times. Until the Hunter also appears during a period of tumultuous political and social upheaval in the United States. “Music soothes you, especially when you write, sing or play an instrument,” Sandoval says. “It really can be a cure for everything.”

“In a strange way, the death of Leonard Cohen distracted us from all this Trump business,” Ó Cíosóig says. “Music is incredibly powerful. It alleviates pain and takes listener away from their own problems or, indeed, the woes of the world. It offers a form of non-thinking, which can play a crucial role at times of stress.”

While Ó Cíosóig says there will be My Bloody Valentine activity in the future, the primary short-term focus is arranging a Warm Inventions tour in late spring and early summer. “We’ll both go back to our own things in due time, but for the moment it is this,” he says. “I jump backwards and forwards and sometimes there’s a few months when nothing is happening. It can get complicated juggling things.”

In the mid-1980s, a fledgling My Bloody Valentine emigrated after Gavin Friday of the Virgin Prunes gave them some addresses and contacts in Holland and Germany. “We only had one fan in Dublin who used to come to every gig, it wasn’t going to work staying here” Ó Cíosóig says laughing.

It has now come full circle as, rather than fleeing his native city, Ó Cíosóig is back living here and making music in its iconic Martello towers. “Yeah, it’s strange,” he smiles. “I suppose I’m not running away any more.”

Until the Hunter is out now