Unthinkable: Should we ever be ashamed of our bodies?

Is obsessing about appearances, and the ‘spectacle of the public putdown’, all driven by economics? 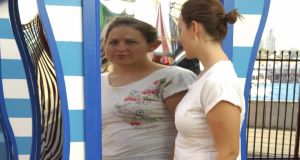 Mirror, mirror: ‘Many psychologists believe we are hard-wired for self-conscious emotions such as shame’

How is it that a spot, a grey hair, or a bit of flab can crush the spirit so? For highly evolved beings, we still have a very primitive reaction to seeing ourselves in the mirror, detecting blemishes in our body shape or fretting over the whiteness of our teeth rather than marvelling at the fact that we are here at all.

Each generation seems to up the ante (thankfully, I missed out on the whole “abs” thing or I’d be a quivering wreck) and, even if you stay ahead of the game you can’t count on fads such as “the thigh gap” (a gap between the thighs that some beauty “experts” claim you can achieve through workouts, even though, in fact, it depends on having a specifically shaped pelvis).

How much is the media to blame for this state of affairs? The “sidebar of shame” is now a popular addition to news sites, while putting people on weighing scales and watching them cry has become a mainstream TV genre.

Dr Luna Dolezal, an Irish Research Council fellow at Trinity College Dublin, is studying the subject of body shame for a forthcoming book. Tackling the issue from philosophical, psychological and cultural angles, she provides today’s idea: A societal response is needed to the challenge of body shame.


Is shame ever a useful emotion?
Luna Dolezal: “Shame is notoriously ambivalent. We tend to see shame as a negative emotion that must be avoided at all costs. It is an extremely painful experience, threatening one’s sense of belonging and one’s social bonds. On top of that, shame is itself shameful. Chronic shame can be a powerful tool of social and political control. We only have to think of social movements such as Gay Pride or Black is Beautiful to see how overcoming shame and transforming oppressive social norms can be politically important for a marginalised group.

“Despite all of this, shame is in fact also necessary; we cannot live or grow without it. Shame establishes boundaries within social relations and facilitates the formation of a coherent and stable social world. For instance, shame plays an important role in child development, especially with respect to helping children to gain a sense of control over their bodies and bodily functions. Shame also eventually enters individuals into moral and ethical life.”


What is responsible for creating shame about one’s body?
“I think body shame arises as a result of a complex mix of factors, it is obviously dependent on social and cultural norms, which are historically contingent and open to change, but there also seems to be an undeniable biological and physiological component.

“Many empirical psychologists believe that we are hard-wired for self-conscious emotions such as shame, pride and guilt (that involve an awareness of how others see us) in a way that other animals aren’t, except maybe chimpanzees. Apparently animals like dogs and cats do not have the capacity to feel shame.”


In your research, you cite the ‘public put-down’ as something that fuels body shame; how so?

“The philosopher and economist Philip Mirowski discusses the spectacle of the public put-down as a central mechanism of neoliberalism. Dozens of reality television shows come immediately to mind where shame, especially shame about the body, is utilis

ed as a motivating force in order to provoke personal transformation. Think of shows like The Biggest Loser , The Swan , Extreme Makeover , Embarrassing Bodies .

“The central idea is that changing the body can improve one’s life . . . This, of course, is problematic as it creates patterns of invisibility and exclusion based on superficial and economic factors that are tied to very narrow standards of acceptable appearance.”

“It is widely acknowledged by feminist thinkers that appearances cannot be considered a trivial concern for women and that body dissatisfaction is not merely an individual – and hence marginal – problem for women, but rather part of a systematic (and oppressive) social phenomenon. By continuously being encouraged to feel physically inadequate – ‘I will never be thin enough, look young enough, stylish enough, attractive enough’ – my self-esteem is compromised and this can have real consequences in terms of my possibilities in life and the sorts of experiences I have.

“There’s a great line from the singer and actress Dinah Shore where she talks about how much women’s self-esteem depends on how they look at any moment. She says: ‘If I had just won the Nobel Peace Prize but felt my hair looked awful, I would not be glowing with self-assurance when I entered the room.’ As crazy as that sounds, I think it would resonate with the experience of many women.”

Are women more than men responsible for creating this culture of body shame?
“We are all operating within a very complex world that has intersecting influences from culture, family, media, politics, religion, economics etc. In the same way there certainly isn’t a monolithic group of ‘men’ who are responsible for patriarchy, I don’t think it’s useful to assign responsibility to ‘women’ for the creation of our current body- and appearance-obsessed culture.

“What we need to do is look at the broa- der social and political structures which create a certain set of desires, experiences and understandings and try and dismantle or transform the structures which are compromising our overall wellbeing.”


Dr Luna Dolezal is giving a lecture at TCD’s Long Room Hub, The Phenomenology of the Body in Shame: Transformation and Identity , on Wednesday, February 26th, at 6.15pm

Question: Does my bum look big in this?


William Blake replies: If the doors of perception were cleansed, everything would appear to man as it is – infinite.