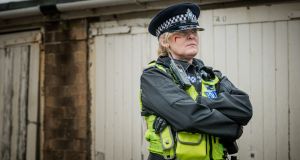 So we’re back in Happy Valley (BBC One, Tuesday) after a wait for a second series that seemed interminable. Nearly two years is a long time in TV, especially when the wait is for a gritty cop drama with a lead character like nothing we’ve seen before in this overexposed genre.

Series one scooped a shelf-load of awards including a Bafta for the lynchpin of the series, Sarah Lancashire, who as Det Catherine Cawood helps keep a sort of order in a grim Yorkshire town. From a distance it looks like one of those pretty English villages fringed by bucolic countryside but since Miss Marple’s time we’ve known surfaces deceive. She’s gobby and strong, divorced, lives with her ex-junkie sister Clare (Siobhan Finneran) and is bringing up her grandson after the tragic death of her daughter. As created by writer and director Sally Wainwright, she is a fully realised, authentic character, right down to her tired, make-up free face and her hi-viz jacket. (In other series, unflattering police uniforms have given way to sharp suits for TV detectives but this is a resolutely vanity-free performance from Lancashire.) Cawood is a tough “you’re nicked mate” sort of copper but with flashes of kindness and empathy for the underdog that spring from her own life experience.

It’s a small town where people have a history with each other. Series one zoned in on this, and tested Cawood’s clear sense of right and wrong when the case touched on her family. It was marked by extreme violence against women. Its central plot was the kidnapping of local rich kid Anne Gallagher (Charlie Murphy). The Irish actor is back for the new series and it’s her first day on the job as a trainee police officer. “They’re the sort of houses you wipe your feet on the way out,” Cawood advises the young recruit as she sets off on her first door-to-door inquiry.

Episode one firmly links back to series one. Its plotlines are mostly referenced in brief snatches of conversation and I wonder if people who hadn’t seen it might be a bit lost. It’s not just Gallagher who is back: so is her kidnapper, the jailed Tommy Lee Royce (James Norton), whose mother has now been found dead in gruesome circumstances. Cawood and the mother have a tangled history.

Wainwright layers her stories like a tightly structured, best-selling thriller, so as well as the hunt for the murderer, now identified as a serial killer, other interlinked secondary plots are introduced. Two, a little strangely, feature women who make “bunny boilers” (that shorthand for the passionately unhinged) seem like jolly culinary innovators. One of the senior detectives, beige boring John Wadsworth (Kevin Doyle) has been having an affair with brittle Vicky from the make-up counter, and when he tries to extricate himself from it, she goes full-on crazy-lady. I wonder though about casting Amelia Bullmore as Vicky: she’s still seared into many people’s minds as the boss in that other Wainwright female-led, brilliant and realistic cop series, Scott & Bailey. And jailbird Tommy Lee has an admirer, Frances (Shirley Henderson). She’s the mousey, whispery type (always sinister characteristics) who looks to be taking it upon herself to wreak revenge on Catherine Cawood and her family for Tommy’s mother’s death.

For those who banged on tiresomely about the number of actors from Love/ Hate in Rebellion, check out the Coronation Street factor in Happy Valley. Key new characters are played by Julie Hesmondhalgh (Hayley) and Katherine Kelly (Becky) and of course there’s Lancashire herself, who got her TV start as Curly Watts’s ditzy wife Raquel. There are five more episodes to go in Happy Valley; already it doesn’t seem enough.