TV: In ‘House of Cards’ series 4, now is the winter of the Underwoods’ discontent

Beware of political spoilers ahead in our TV review of `House of Cards’, ‘Murder: The Third Voice’, and ‘Fire in the Blood: The Revivalists’ 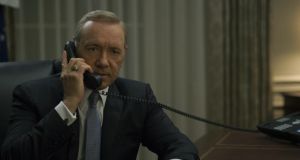 Netflix: Kevin Spacey as Frank Underwood in House of Cards

So Claire did leave Frank after all. That was the cliffhanger at the end of the third series of House of Cards (Netflix): would the first lady, Claire Underwood, leave her US president husband, Frank? It was an oddly domestic wrap-up to a political drama that since its second series has more than occasionally teetered on the brink of soap-opera territory.

The first episode of series four picks up soon afterwards: Claire (Robin Wright) is in Texas, home to mama (a scene-stealing Ellen Burstyn), although it’s not for a cosy mother-daughter reunion after a 10-year estrangement. In revealing scenes we see where Claire gets her steeliness and high cheekbones: it’s terrific casting in so many ways. She is home to start on the first rung of her own political climb to the top, by persuading a veteran congresswoman (Cicely Tyson) to endorse her.

Frank (Kevin Spacey) is still on the campaign trail for a second term. His biggest problem is fending off the press as they ask him why the first lady isn’t at his side. Ever the pragmatist, he goes to Texas to win her back – and not romantically. One of the most vivid scenes is a dream Frank has in which they viciously attack each other. Their bloody brawl in his nightmare is an unsubtle metaphor for their burgeoning political rivalry, now that Claire has declared her ambition.

There’s now something diminished about Frank. He’s got a paunch, and his hair looks more painted on. If he didn’t have his half-psycho Rottweiler chief of staff (Mike Kelly) at his side he could be, in his bomber jacket and dad chinos, an accountant on his day off. Even Claire’s new political strategist (Neve Campbell) is disrespectful to him. In contrast Claire looks commanding, sharply suited, gorgeous (obviously: it’s Robin Wright) and on her way up.

Gone are the overt Shakespearean asides, those Richard III moments when Frank smashed the fourth wall and shared his schemes with the viewer, making us complicit in his evil ways. But the dramatic references are still subtly here: a news anchor speculating about the Underwood marriage wonders if there’s “something rotten in the state of Denmark”.

The script is full of talk of the New Hampshire primary, the challenge of winning Texas and nailing Iowa. It is all very familiar, because that’s what we are hearing daily in the real world outside Netflix. Watching House of Cards isn’t tethered to real time, of course: it seems almost counter-pop cultural to watch only one episode on release day and not binge on the full 13.

That’s the challenge for this series: to offer something more dramatic and downright astonishing than what is unfolding in the real US presidential election. The Emmy-winning behemoth is still watchable, but is it still bingeworthy? I’m not so sure.

There’s no ambiguity in the main title of the new series Murder. The first instalment of three standalone dramas is called Murder: The Third Voice (BBC Two, Thursday). No sooner is a body recovered from the river then the fourth wall is whipped away and a detective is talking to us, face to camera: “He near enough bled out. Murder. My first day back,” she says.

So the story unfolds, with each of the protagonists telling us in a series of monologues their side of the story, moving the narrative on until, at the end, the truth emerges from the fragments of memory and false recall, and the killer is unmasked.

The Irish actor Peter McDonald leads the cast as the obvious suspect. In mood it’s as low-key as you might expect from Birger Larsen, the Danish director of The Killing, and the monologue-only approach differs from the usual murder and detective dramas.

I’m not sure it works. You’re rarely more aware that a character is an actor speaking lines than when he or she is delivering a monologue. And even the grittiest, most realistic crime dramas depend on suspended disbelief. So by the time Murder: The Third Voice wends its way – there’s little tension – and everyone has their say until the killer is revealed, it’s hard to be too bothered about it.

George Bernard Shaw, not known to gush, called Lady Augusta Gregory the greatest living Irishwoman. Certainly, what remains after watching a profile of her in Fire in the Blood: The Revivalists (RTÉ One, Monday) is the image of a powerhouse, someone who could make things happen. As well as cofounding the Abbey Theatre, Gregory was a key figure in the Celtic Revival, a prolific writer and a landlord of a working estate in Galway. She was urbane and cultured, and her house was a magnet for prominent writers in the early 20th century.

This first of a four-part series on key figures in the Celtic Revival, shown as part of the 1916 commemoration strand, is presented by the actor Derbhle Crotty (a nominee in this year’s Irish Times Irish Theatre Awards, which take place on Sunday).

Fire in the Blood packs a lot into 30 minutes. It focuses on Gregory’s cultural crusade but also touches tantalisingly on her personal life: a marriage to a man 35 years her senior, the death of her only son in the first World War, and her mastectomy under local anaesthetic. You want to know more.

Crotty comes over as a passionate advocate for Gregory, but it’s a pity she’s not used more. Too often her role is just of narrator; it would be interesting to see her talking to the contributors, who include my colleague Fintan O’Toole and the theatre director Lynne Parker. That would be more dynamic than simply having them talk to the camera.

Patrick Freyne on Love Is Blind: If the founders of Gilead merged Love Island and Blind Date
2

Caribou’s Dan Snaith: ‘A lot of pop music is really challenging and interesting’
8