The best podcasts of 2016, that you’ve probably never heard of

From crime to comedy and US politics to U2, here are the on-demand audio shows that caught our ear this year 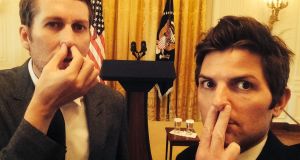 Uno, dos, tres, catorce! Scott Aukerman and Adam Scott prepare for the How to Dismantle an Atomic Bomb episode of their podcast U Talkin’ U2 To Me?

Podcasting saw a big jump in fortunes in 2016. Following the success of 2015’s standout hit Serial, the artform became more fully embedded within the culture than ever before, to the point that – and I may be corrected on this – 30 per cent of the world’s population currently host or produce several podcasts themselves.

In the face of such a glut, here’s a tiny, incomplete and utterly subjective, digest of the ‘who’, the ‘where’ and the ‘what is that now exactly’ of podcasting over 2016.

Crime
Serial’s uncertain second series proved divisive, but there were other true crime podcasts that saw their fortunes rise in this time, not least Criminal, Phoebe Judge’s narratively driven, crime-of-the-week show, and Untold, a British podcast that painted a damning picture of police and press malfeasance in the highly suspicious, and unsolved, murder of Daniel Morgan.

Though its surplus of names and dates can often make it slightly tricky to wade through, Untold is solidly gripping audio from start to finish and well worth the investment. On the other end of the spectrum, My Favourite Murder is a grotesque and grisly trip through noted serial killer cases, in which hosts Karen Kilgariff and Georgia Hardstark still manage to wring black humour from the ghoulish fare on offer.

The show’s strength lies in the hosts’ ability to balance their incredulity with an underlying affection for the dad in question, making the whole exercise a lot more enjoyable than some cruel exercise in snark ever could have managed.

As for snark, given the year the United States has just had, it’s little surprise that the biggest stateside podcast this year was Chapo Trap House, an altogether more bracing and venomous approach to politics than most before it.

Much of US political humour is delivered by people whose comedic tastes lie somewhere Dilbert cartoons and Greek puns. Chapo, on the other hand, treats the US political system like a hated ex-husband, attacking it with the bristling hatred of a first wife determined to get everything off him but the dog kennel.

Elsewhere, the peerless U Talkin’ U2 To Me? came to an end, the all-time front runner for the title of “funniest podcast that it’s near impossible to get your friends to listen to”. Like Analyse Phish before it, it was a comedy podcast that is simultaneously about a band and anything but that band, and it’s also one of the funniest things ever created for the human ear.

Starring Scott Aukerman (host of the excellent Comedy Bang Bang podcast and TV show) and Parks & Recreation’s Adam Scott, UTU2TM? purports to be an encyclopaedic guide to Ireland’s rock royalty but is, in practice, a deliciously surreal and hilarious tour through labyrinthine mess of surreal in-jokes, wilful nattering and a small helping of actual U2 discussion. To know it is to love it, even for those agnostic to the allure of the band in question.

Politics
On the more sober end of the social and political spectrum, the people behind Radiolab launched More Perfect, a mini-series that detailed the US Supreme Court, charted notable cases and examinned what they say about US society, with all the depth and detail that’s made its parent podcast one of the most reliably unique voices in podcasting.

Also of note is The Cracked Podcast which continues to be a whole lot more thoughtful and stimulating than its hyper-vanilla title would suggest. Consistently among the most interesting shows on the web, Cracked balances its salient, propulsive discussions with an evil knack for clickbaity episode names. Standout shows from the past year include Culture-Specific Things We Do That We Assume Are Universal and What The F**K Just Happened? an episode which dissected Trump’s victory from a variety of fascinating sociological vantage points.

Irish
Closer to home, perhaps appropriate for an island shaped like a big flappy ear, Ireland continues to boast more than its fair share of diverting downloadables, with perennial masters Second Captains still offering an omnivorous feast for sports boffins of all stripes, and the many-headed Irish History Podcast, now delivering its truthy nuggets across a raft of different series.

Elsewhere, Jarlath Regan still gets great stuff out of his guests on An Irishman Abroad, perhaps lulling them into a false sense of security by speaking so quietly it sounds like he’s in a library filled with babies he’s just gotten to sleep.

Finally, a note in recommendation of the utterly delightful Juvenalia podcast, in which Alan Maguire and his co-hosts interrogate a series of interesting Irish folks about those works of art that had a big effect on them growing up. Fun, chatty and never less than utterly charming, Juvenalia is a direct line to the faintly mortified child inside us all.