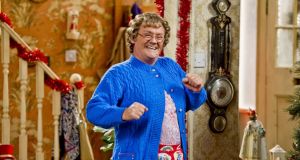 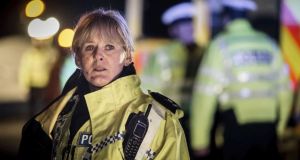 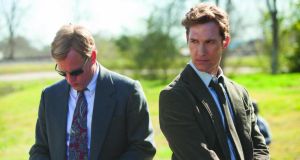 Even the most flapperphobic viewer can see the appeal of Downton Abbey (UTV) on Christmas Day. Nothing much happens that we haven’t seen versions of before, whole chunks of dialogue are cosily familiar, and it looks rich, colourful and gorgeous – perfect, easy-going escapism, in other words. But, a bit like an Italian panettone cake, it’s all irresistible wrapping but disappointing when you bite in.

Much like last year, Downton is one of the big three dramas on Christmas Day, when the TV is as predictable as the turkey-ham-and-sprouts combo. It is joined in the schedules by the joylessly vulgar Mrs Brown’s Boys Christmas Special (RTÉ One and BBC One) and the misery-filled but never-mind-we’re-British Call the Midwife (BBC One) – both viewer magnets, pulling in vast audiences.

For its Christmas special Call the Midwife excels in what it does best: there’s a harrowing birth scene, grinding poverty, a man having an epileptic fit in the street, and a toddler who might die. And just in case that’s too cheery of a Christmas night, the main action takes place in a mother-and-baby home. So there’s the emotional wrench of a child being sped away for adoption as its mother runs wailing down the drive, plus a mental-illness-themed subplot when a disturbed, lobotomised woman has a phantom pregnancy.

It snows, there’s a crib and a tree, and a fat bloke dresses up as Santa for the children’s concert – so there is a bit of Christmas about it all. Its director, Thaddeus O’Sullivan, makes it look lovely and 1950s authentic, but it’s too miserable. Even Miranda Hart as the chief midwife, Chummy, is downbeat. There’s added acting-royalty star power this year: the opening scene, set in 2005, has Vanessa Redgrave as Jennifer Worth – the writer whose memoir inspired the series – dreamily remembering her time in the nursing convent in London, before the action flashes back to the 1950s. It stays there until the final scene, featuring Redgrave finding a crib figure she has from that time – but even that is broken.

If Call the Midwife is misery lit filmed large, then Mrs Brown’s Boys also excels in what it does best: this year’s seasonal special is spectacularly vulgar. This is not so unusual, but there’s an undercurrent of prime-time boundary-pushing for the sake of it that sucks any joy or humour from Brendan O’Carroll’s enormously popular creation.

This Mrs Brown’s Boys is certainly not one for all the family, it’s not very seasonal and it’s remarkably unfunny. It’s the run-up to Christmas, and Rory tells his ma he’s getting Botox, which Mrs Brown (O’Carroll) misunderstands as a sex-change operation – “getting his Botox chopped off” – leading to the inevitable scene with Mrs Brown on her knees with her head up the skirt of a woman she thinks is her postop son.

Looking back, 2014 had few similarly soul-sucking, scrub-your-eyes TV moments. It was a year when the good dramas – meaty ones with layered stories, memorable characters, top acting and tight scripts – strongly outnumbered the dull and dreadful ones, or even those, like The Great Fire (UTV), about the Fire of London, or the mumblefest dramatisation of Daphne Du Maurier’s Jamaica Inn (BBC), which just didn’t work despite apparently ticking so many boxes.

The test for me is whether I set the recorder for a programme and then actually watch it – and, if it’s a series, whether I’m impatient for the next episode or lose enthusiasm after the first few and then forget to watch any more, as was the case with True Detective and Fargo.

Topping the list of unmissable dramas of 2014 was Happy Valley (BBC One), with Sarah Lancashire giving the performance of her career as a worn-out policewoman solving an-edge-of-your seat kidnap case (with a terrific performance from Charlie Murphy as the victim).

Line of Duty (UTV) delivered the same tension and gritty realism, and the same vanity-free performance from its lead, Keeley Hawes, playing the complicated, unlikable and vulnerable Det Insp Lindsay Denton. Scott & Bailey (UTV) was also back for a new series – and on top of its game in terms of thrills and truths. The female leads in these series are nuanced, rounded, believable characters. Gillian Anderson, as Det Insp Stella Gibson in The Fall (BBC One and RTÉ One), the other must-see police series, went over the top with her ice-maiden performance and studied speech that grated as the series went on.

All of these shows had terrific ensemble casts. Adrian Dunbar, in Line of Duty, and John Lynch, in The Fall, nailed weary midlife disappointment – what is it about actors from Northern Ireland and misery? – topped only by James Nesbitt, with his crumpled face and barely contained volcanic anger, in The Missing (BBC One), the cliffhanging, emotional-roller-coastering, time-shifting drama about the aftermath of a child abduction.

British TV series such as these are getting longer, and in this era of quality TV drama that’s a good thing. Hugo Blick’s intelligent, brilliantly realised The Honourable Woman (BBC Two) was an old-school spy thriller, richly detailed and complex, a family saga set against the ever messy geopolitics of the Middle East. A stunning Maggie Gyllenhaal made her television debut with a perfect British accent.

The third series of Homeland (RTÉ2 and Channel 4) was clever and tense, with a pounding story arc that credibly referenced real events. It was remarkable to see how a drama so brilliant in its first series and so dire in it second could bounce back, reimagined as a complex spy thriller with more fully developed lead characters.

If the gangland drama Love/Hate – RTÉ’s rating juggernaut – is to come back (as threatened), it will need a Homeland-style reboot, not just because Nidge is dead and it’s his series but also because the thin storyline – Nidge is a marked man, Nidge dies – and the two-dimensional characters can’t make for six compelling, challenging hours of TV drama.

There has been some sharp, unforgiving satire on RTÉ, particularly on Callan’s Kicks, which made me laugh and despair at the state of country as seen through Oliver Callan’s scathing, neither-fear-nor-favour approach.

There have also been some memorable interviews. Gay Byrne’s God slot, The Meaning of Life (RTÉ One), presented a feisty, revealing Majella O’Donnell and a surprisingly New Agey Enda Kenny, whose appearance was a reminder of how little TV time the Taoiseach gives us.

There was a glut of behind-the-scenes documentaries – in the Dóchas Centre women’s prison, at the Shelbourne Hotel and in the Probation Service – all serving the people they filmed rather than the audience. The approach looked dated compared with the immediacy and reality on offer on 24 Hours in A&E and 24 Hours in Police Custody (Channel 4).

Connected (RTÉ2) featured four women who filmed themselves for six months, the footage cut down to weekly TV and web programmes. The editing was superb, and the close, intimate programmes gave flashes of insight into the women’s lives. Yet they attracted a relatively modest audience.

The best home-grown observational series of the year was TV3’s editorially measured and beautifully shot Darndale: Edge of Town, about life on the north Dublin estate.

A trio of very different one-off documentaries illuminated three difficult subjects. Somebody to Love (RTÉ One) focused on the problems people with a disability have in forming intimate relationships. The quietly powerful observational and unemotional film Her Body, Our Babies (RTÉ One) was about a Co Clare couple whose twins were born via a surrogate in Mumbai. And the intense Panorama: Ebola Frontline (BBC One) followed Dr Javid Abdelmoneim of Médecins Sans Frontières’ on his voluntary tour of duty in Sierra Leone. It aired in November, at a time when Ebola had largely slipped from the headlines.