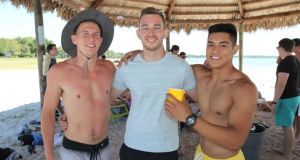 If you’ve seen any of those Hollywood comedies set on US campuses (think the National Lampoon franchise – or, better still, don’t) you know a little about fraternities. They are live-in university societies with names culled from the Greek alphabet whose members are mostly privileged white students, and they are famous for their hard drinking and permanent partying.

But as Frat Boys: Inside America’s Fraternities (BBC Two, Thursday) shows – with ease, as these alpha dudes score low on self-awareness – they contribute to a toxic campus culture. I suspect the frat boys, with their back-to-front baseball caps and toothy self-confidence, have no idea where the film’s emphasis will fall. Watch this timely fly-on-the-wall documentary and you begin to understand more about such horrifying events as the Stanford University sexual-assault case and Brock Turner’s controversial sentencing.

At the University of Florida Ben gives a tour of his frat house, where bras hang on the wall like trophies and graffiti rates the girls. Another frat boy says, in a way that suggests he thinks he might make his momma proud, “I’m not the kind of guy who is going to bring home 10 different girls a month. I’ll do two or three girls. That’s the kind of guy I am.”

They drink (for a dare one drinks beer from a deck shoe) and they bond, pledging life-long allegiance to each other.

Many would-be frat members have died during sadistic initiation rituals or hazing. A lawyer explains that it’s not in the colleges’ interest to stamp fraternities out. They are simply too lucrative: alumni who were members of fraternities are the most generous donors.

One female student in Syracuse explains why it’s in no university’s interest to honestly and publicly deal with the exponential growth in sexual assault on US campuses, “because no one wants to be known as the rape college”.

Is there a naming formula for European dramas that reach us? In more EU-open times we’ve had The Tunnel and The Bridge. Now comes The Border (Channel 4, Tuesday), a six-part Polish drama.

The border that is the geographical star of this series is the Polish-Ukrainian frontier in the misty, remote and atmospheric Bieszczady Mountains. That, though, is not immediately clear in this slow-moving, dour drama, where the emphasis is on action at the expense of character: there are so many tough-looking Polish men in combat gear scowling at the camera, with so little to tell them apart.

And then a plot presents itself. Some border guards are killed in an explosion in a mountain hut. Only one survives, Capt Wiktor Rebrow (Leszek Lichota). Even though his wife is killed in the explosion he is immediately under suspicion. At his hospital bed the prosecutor makes known her suspicion, fuelled by finding his mobile phone with the last text he received, a moment before the explosion, which simply says “boom”.

Rebrow must prove his innocence, find out what happened and uncover a ruthless people-trafficking syndicate. And he must do all this on his own: his role as head of the border guards has been taken by a man who will prove either his ally or his enemy as the drama goes on. A strange mystical element is thrown in the mix in the form of a wolf that appears at key moments, including the night of the explosion and when Rebrow is visiting his wife’s grave.

This import is macho in the way of an action-stuffed airport novel, from the combat and night-vision goggles to a hard-drinking hero of few words who must prove his innocence. All of this is against a backdrop of hunting down terrified would-be migrants. Even when the only other choice is soccer, The Border will be going on without me.

Even the wilting potted plant in the waiting room can’t soften the tense atmosphere between the warring couples waiting to see a mediator. It seems almost cruel to make them sit side by side in the tastefully anonymous reception room. After all, the point of the fly-on-the-wall documentary Mr v Mrs: Call the Mediator (BBC Two, Tuesday) is that the now-separated couples are so far adrift from each other that they can’t communicate.

But they have to, usually on two subjects: money – there are two calculators on the mediator’s table – and the custody of their children. The latter, sadly, proves the most difficult to negotiate. The National Family Mediation service in England and Wales offers to help separated couples as an alternative to expensive court proceedings. Each of the three films features three couples, and for the viewer there’s an undeniably prurient element as their dirty linen is given a good airing. We see the couples in the mediation rooms and then, later, explaining more about what happened to sunder their relationships.

After 28 years of marriage Sue left Peter: “She left a casserole in the kitchen. The house had never been cleaner,” he says. She went to live with Peter’s old boss, and now she wants 50 per cent of the FFH. (That’s former family home: separation brings a new lingo.) The property market has risen 10 per cent in the intervening year, but Peter, an accountant, says the value of the house should be assessed as on the day she left and “resigned from this marriage”.

There’s an air of tired familiarity about Sue and Peter: “Did you get parking?” she asks, probably out of habit. Relations between the two other couples are fuelled by acrimony. Jason and Vicky are struggling to share the parenting of their young daughter, but they can’t be in the same room, so the mediator shuttles between rooms, doing a filtered version of he said, she said.

Who doesn’t like a nosy around other people’s lives? But there’s something unsettlingly jaunty about Mr v Mrs: Call the Mediator. The title has that gameshow reference – even though two of the couples aren’t married – and the nod to the hit drama Call the Midwife. And Zoë Wanamaker’s voiceover has the same arched-eyebrow tone she uses in those documentaries about swish hotels.

All that seems to trivialise the hurt-fuelled disputes we’re witnessing. The background music adds to that uncomfortable feeling. And, curiously for a film presumably aimed at encouraging separating couples into mediation, only two of the three, despite the best efforts of skilled mediators, have a positive negotiated result.

The movie quiz: Who has never had a film banned in Ireland?
6