From Gaybo and the Golden Globes, to a new TV thriller from Jo Nesbo, here are seven programmes worth catching this week 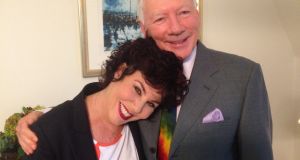 The Meaning of Life with Gay Byrne

Gaybo’s recent heart attack is a reminder to all of us that life is precious, and his new series of The Meaning of Life with Gay Byrne promises to reaffirm what’s really important for our wellbeing and happiness. Gaybo’s first guest in this new series is comedian and author Ruby Wax, who talks about how she tackled depression by studying psychology and mental health so she could better understand what she was up against.

Wax was born in Idaho to Jewish parents, both of whom had mental health issues, and moved to the UK to study acting. She found fame in the 1990s with her irreverent interviews with celebrities, including Sarah Ferguson, Imelda Marcos and Pamela Anderson. These days, she writes and speaks publicly about mental health – in her usual irreverent style – and will chat to Gay about her own journey to wellness, most likely skewering a few sacred cows along the way. Oh, by the way, Gay, get well soon.

What happens when a hospital is overrun with patients, the trolleys are out the door and there’s not enough medical staff to deal with the tsunami of sickness? In US medical parlance, this situation is known as a Code Black, and it’s also the title of a new medical drama set in the country’s busiest ER, where the doctors and nurses are pushed to the limit by the continuous influx of people in need of life-saving treatment. Code Black is inspired by an award-winning documentary, and stars Oscar-winning actress Marcia Gay Harden as the ER’s residency director Dr Leanne Rorish, who, in the tradition of great TV doctors, does things a little unconventionally but still gets results.

Irish families are addicted to a dangerous drug that causes four major diseases and affects our health in a variety of nasty ways. Yet we feed these little white granules to our kids without giving it a thought. Sugar Crash is a documentary which investigates Ireland’s unhealthy relationship with sugar – we are the world’s fourth largest consumers of sugar, each of us taking an average of 24 teaspoons of the stuff a day, most of it hidden in the food we eat.

Dr Eva Orsmond takes a Kilkenny family through the difficult process of cutting down on their sugar, with all the attendant withdrawal symptoms. “Added sugar is public enemy No.1 in the Western diet,” says Dr Orsmond. “We are all over-consuming sugar in Ireland. In 50 years’ time we will look back in horror.” Oh, dear, I’ll need a cup of sugary tea after that.

What do you do when the host of your awards ceremony upstages Hollywood actors with cruel, irreverent comments and reckless use of bad language and insults? Why, you ask him back again to host The 2016 73rd Annual Golden Globe Awards. Top execs swore they’d never have Ricky Gervais back, Gervais swore he’d never host the awards again, but he’s been persuaded to pick up the MC’s mic for this year’s ceremony, taking over from Tina Fey and Amy Poehler, who co-hosted to huge acclaim over the past three years.

Gervais has even apologised in advance for whatever he’s going to say at the event. “I’d like to apologise now for the things I said at next week’s Golden Globes. I was drunk & didn’t give a f**k,” he tweeted on New Year’s Day. The Golden Globes are being held tomorrow night and televised on Monday night at 9pm, with the red carpet coverage starting at 8.10pm.

Remember Tracey Ullman? She was one of TV’s biggest comedy stars of the 1980s, and led the British comedy invasion of the US with The Tracey Ullman Show (it also spawned The Simpsons). Now Ullman’s back with her first TV gig in 30 years. Tracey Ullman’s Show is a six-part sketch show that features the 56-year-old in fine comic fettle, delivering razor-sharp impersonations of Judi Dench, Maggie Smith and Angela Merkel among others.

For every major pop star, there’s a tough, often ruthless figure pulling the strings to make them household names. Music Moguls is a three- part series that goes backstage to meet the managers, producers and PR agents behind some of the biggest names in pop, including Simon Napier-Bell, who launched the careers of The Yardbirds, Marc Bolan and Wham!, Andrew Loog Oldham, who steered The Rolling Stones to fame, and Jon Landau, who saw the future of rock ‘n’ roll in the form of Bruce Springsteen.

In a not-too-distant future, Norway is run by an environmentally friendly government which decides to cease supplying North Sea oil to the rest of Europe. Naturally, this gets up European leaders’ noses, so they call on Russia for help. The Russians duly oblige by invading Norway in order to seize its oil resources. Occupied is a 10-part political thriller written by bestselling crime author Jo Nesbo, the man behind the acclaimed Harry Hole novels, and produced by the Swedish studio behind such Scandi-noir hits as the Wallander TV series and the Girl with The Dragon Tattoo films.

Ivan Yates turns the blowtorch on all politicians
6