“Did Adnan do it?” may be the “Who killed Laura Palmer?” of our generation. Or, at least of one generation of podcast listeners. 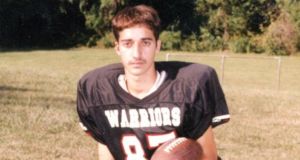 The reason is Serial, a hugely popular spin-off podcast from This American Life created by Sarah Koenig, which was the number one podcast on iTunes two weeks before it even began, on October 3rd. It has since gained millions of followers.
Serial follows a real-life murder case from 1999, in which football-player Adnan Syed (above) was sentenced to life in prison for the murder of his ex-high-school sweetheart, Hae Min Lee. The story rolls religion, sex, drugs and straight-up coincidence into a half hour of gratification. But what has made this standard storyline for a radio doc into an international obsession among the podcast community is the addictive storytelling.
It’s aural catnip for podcast listeners that fills an important gap by being one of the first podcasts to properly use a serialised format.
What further fuels people’s addiction is the fact that the people working on Serial don’t know how the series is going to end. Koenig and her team are still in the act of reporting the case, and as she told Time magazine, the listener is just one or two episodes behind the case unfolding.
A world without Serial might be hard to imagine. But don’t fret; they’re moving on to a new case for another series.